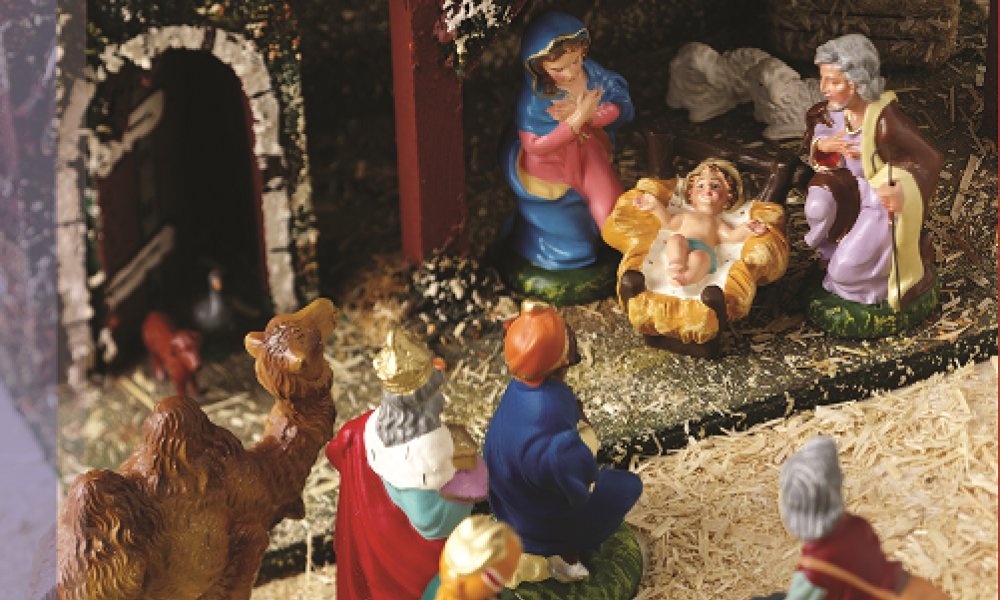 Collecting creches can be a cultural, artistic, and religious experience.

I’ve always been a bit boastful about my family’s nativity set. Made of sturdy wood with an antique finish, it not only features the traditional manger area but a crenellated tower with a music box that plays ‘Silent Night.’ That musical feature, along with a host of animal figurines to arrange and rearrange in the straw, gave me no end of entertainment as a child.

But I must admit the nativity sets at the neighboring Church of Jesus Christ of Latter-day Saints put our set to shame.

Each year, on the first weekend of December, this Mormon congregation exhibits an extraordinary collection of nativity scenes (also known by the French word for crib, creche) gathered from around the world. In 2003, more than 900 examples will be on display, representing 100 countries from Argentina to Zimbabwe.

The first thing you’ll notice when you stroll around the exhibit is that each country interprets the nativity scene in its own way. This is most obvious in the kinds of materials used to make the figurines: ebony for African creches, for example, or brightly colored tin for those crafted in Mexico.

You can also expect to find variations reflecting the climate of the country of origin. Palm trees are common in tropical creches. In contrast, a nativity set crafted by an Inuit artisan has all the characters dressed in animal skins and the baby Jesus lying on a sled.

As for animals, an ox, an ass and a couple of sheep might be all that are featured in your family’s creche. But look closely at the Mormon exhibit, and you can find everything from an aardvark to a yak paying homage to the baby Jesus. My personal favorite was a fish ‘ on land!

Collecting crèches as a hobby

Thinking about starting your own collection of creches? Settle upon a collecting theme as your first step. One criterion could be the country the sets come from; Italy is especially noted for the craftsmanship of its creches. After all, St. Francis of Assisi popularized the idea! (See below.) Or you could focus on the material used to create the sets, such as metal, ceramic or fabric, or natural materials like wood, cornhusks and reeds.

Another theme possibility? Choose either traditional, realistic renderings of the nativity scene or more modern interpretations with fewer figurines, simpler lines and a muted color palette.

What about broadening the definition of your collection beyond freestanding figurine sets? Think wall hangings, Christmas ornaments and even snow globes incorporating the nativity scene.

One final thought? Go with the tried and true: creches from collectibles companies such as Precious Moments, Hummel and Lenox. Fontanini, an Italian manufacturer, also produces limited-edition polymer sets that are highly coveted by collectors.

For more ideas on how to collect nativity sets, contact the Friends of the Creche ‘ a collectors’ society through The Marian Library Web site at www.udayton.edu/mary/gallery/creches.html.

Francis of Assisi and the Christmas Creche

Donald Spoto, author of a new biography of St. Francis titled ‘Reluctant Saint,’ tells us that the founder of the Franciscans played a major part in popularizing the tradition of the creche. In 1223, Spoto says, Francis traveled south of Assisi to Greccio to celebrate Christmas with some of his friars. For midnight Mass, he asked that livestock be brought in and placed next to a local husband and wife with their infant, who stood in for the Holy Family. And friars were enlisted to represent the magi and shepherds.

The high point of this tableau vivant or liturgical drama was when Francis preached on the humility of God’s entrance into time, in the form of a helpless infant of humble origins.

The creche was already part of the holiday customs at cathedrals in Rome and elsewhere. Spoto concludes that, although Francis didn’t ‘invent’ the creche, ‘He took the event out of the past and linked it to the present ‘ not only by using ordinary people in ordinary places and in their own garb, but by linking the birth of Jesus to the present mystery of God’s drawing near in the liturgy.’

Washington, DC - A nativity the size of a walnut and almost 200 others bedazzle visitors to the extraordinary Third Annual International Nativity Exhibit at the Museums at the Pope John Paul II Cultural Center. Nativities representing every inhabited continent are on view beginning November 21. Joy to the World: the Third Annual International Nativity Exhibit is sure to intrigue visitors of all ages. The exhibit runs through January 25, 2004.

Reverend Profota, pastor of St. Basil Parish in Eastpointe, Mich., has been collecting nativities since he was a child. He has graciously donated his collection of almost 300 creches from all over the world to the Cultural Center with the intention that they spread the joy of Christmas to many visitors in the years to come. Pieces from his collection on display include several pyramid candle nativities from Germany and Italy and an Alaskan creche in which Mary, Joseph and the baby Jesus in Inuit garb sit in front of their igloo accompanied by a wolf and a moose.

Reverend Monsignor McClosky, pastor of All Saint`s Catholic Church in Houston, Texas and a Cultural Center trustee, began collecting nativities in 1965, concentrating on miniatures. The very first nativity in his collection, a delicate wood carving from Germany, is on display, along with the Costa Rican Nativity in a Walnut with the Holy Family nestled in a hollowed-out walnut shell and another with the figures resting inside a small bird`s egg. Other miniatures from his collection include a tiny silver filigree globe from Italy and a nativity on a kitchen timer.

Mr. Govan and his late wife Emilia amassed a collection of more than 300 nativities from nearly 80 countries through extensive international travels and research. Mr. Govan, who is president and co-founder of the national Friends of the Creche society, continues collecting today by commissioning artists around the world to create nativities that reflect their local cultures. This is the third year that Govan Collection nativities are represented in this exhibit.

Magnificent examples from the Govan collection include an intricately detailed nativity from Singapore made from the ground powder of Malaysia`s wild cinnamon trees. The kings are based on classical Chinese figures representing ancient dynasties while Mary resembles the Taoist Goddess of Mercy. A Cambodian nativity, in which the figures are depicted in the Khmer style, was exquisitely crafted by six physically challenged carvers, disabled by landmines or polio. And visitors are sure to be moved by the elongated forms of a redwood creche, carved by Liberian artisans, which underscores the grace and solemnity of Christmas.

The Museums at the Pope John Paul II Cultural Center are open Tuesday through Sunday. Admission and parking are free. Donations are accepted. For more information, please call 202-635-5400 or visit www.jp2cc.org.

The Museums at the Pope John Paul II Cultural Center provide a dynamic environment in which visitors of all ages and denominations engage in an intriguing exploration of faith and culture. Through technology, art exhibitions and cultural programs, visitors explore spirituality and culture, learn about the faith of others and engage in inspirational activities designed to put their faith into action in their everyday lives.