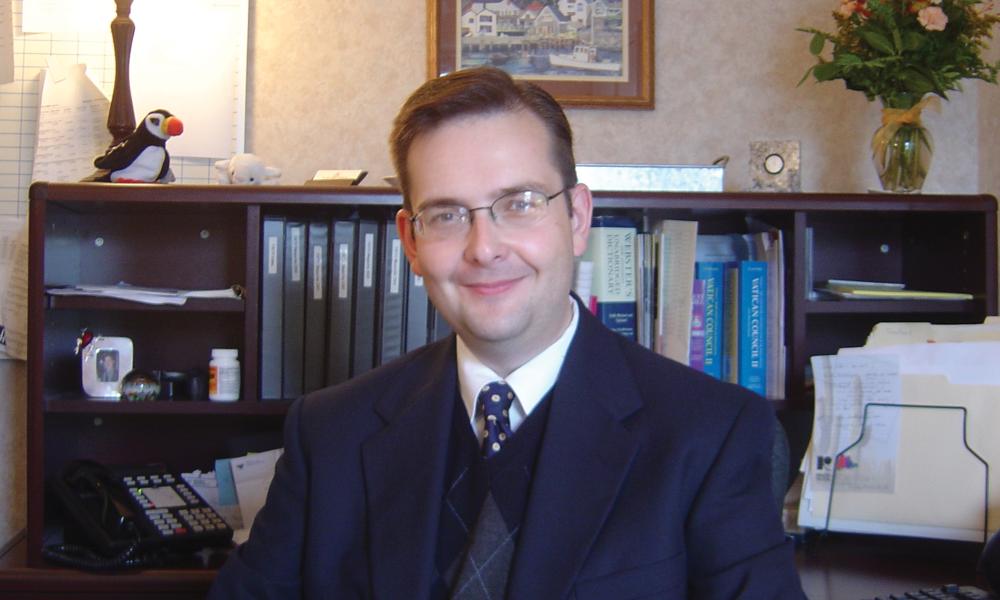 Michael Andrews is new chancellor of the diocese

Can you explain the duties of the position of chancellor of the diocese?

Many people associate the position of chancellor with St. Thomas More, who defended the rights of conscience and the teachings of the Catholic faith with his words and actions, to the point of martyrdom. In fact, it was already an ancient office by More’s time, tracing its origins to the courts of ancient Rome. Its historical roots can perhaps provide the clearest context in which to describe the duties of a chancellor today. Anciently, the chancellor’s duty was to inscribe the sentence of the tribune into a permanent record and to make certain that the sentence was carried out according to the prescriptions of the law. Eventually, more juridical and administrative responsibilities were delegated to the chancellor, who became a leading officer of state. From the days of early Christianity, the Church adopted the general outlines of this system, purifying it by the light of the Gospel, so that, in the Church, the role of chancellor became a role of ministerial service in collaboration with the ministry of the bishop, particularly in certain administrative matters. Today, these include gathering, arranging and safeguarding the deeds, proceedings and records of the diocese. Additionally, the chancellor certifies official documents, and, by delegated powers, grants certain permissions and dispensations, among other responsibilities, that assist the bishop as the point of connection between the local church and the universal Church.

How has this role been fulfilled previously in the Diocese of Lansing?

Canon law requires the appointment of a chancellor for every diocese. In fact, a few months after the Diocese of Lansing was established in May 1937, Bishop Albers appointed Monsignor Joseph Byrne as chancellor, who thus became the first diocesan official. Up to 1983, canon law required the chancellor to be a priest. Pope Saint John Paul II dropped this stipulation when he introduced the current Code of Canon Law. My immediate predecessor, Deacon John Cameron, was our first chancellor who was not also a priest. I wish to add that Deacon Cameron has been a great help and resource to me during the current transition, as well as throughout the years we’ve worked together. Prior to Deacon Cameron, this office has been held by a series of excellent, sterling priests of our diocese, including most recently, Bishop Steven Raica, Monsignor Robert Lunsford, and Bishop James Murray.

What are you looking forward to in your new position as chancellor?

The priests, deacons, religious, lay ecclesial ministers and faithful of the Diocese of Lansing have been blessed with a great variety of gifts for building up the Church. It’s always impressed me that there are so many people in these 10 counties who are very well-grounded in their faith and seek to serve others in Christ’s name with marvelous generosity, whether as catechists, cantors, teachers, administrators, prayer leaders and the like; and also as parents, co-workers and actively engaged parishioners. I believe that this is a special sign of God’s favor, which also implies the responsibility to deepen these gifts to serve the design that God has for us all. Bishop Boyea’s Pastoral Letter, Go and Announce the Gospel of the Lord, provides a common focus for these efforts. I look forward to fulfilling the part God has in mind for me that will help advance his purposes for the salvation of his people.

You were the director of the Office of Worship for the diocese; how do you anticipate this position will be different?

At first glance, it might seem that these two positions are unrelated, after all, the chancellor has few specific liturgical functions, and these are only on rare occasions, such as at the installation of a bishop. But this view is too superficial. We can see with greater clarity by turning to the opening sentence of the last encyclical of Pope Saint John Paul II, in which he wrote: “The Church draws her life from the Eucharist.” In other words, the Church has her source in Jesus’ death and resurrection; the Church is itself the answer to his commission “Do this in memory of me.” The Church is communion, the communion of the Word and the Eucharist, as well as the communion in God among all the peoples on earth, forming us into one people, and so we are Catholic, or universal, with a mission to all people everywhere, and embracing all that is true. While the work of the Worship Office emphasizes the sacramental actualization of these truths, the work of the chancellor is at the service of those realities that the Eucharist brings about, especially as the Eucharist is the sign of unity and the bond of charity. All of this finds full expression in the local church in the sanctifying, governing and teaching ministry of the bishop.