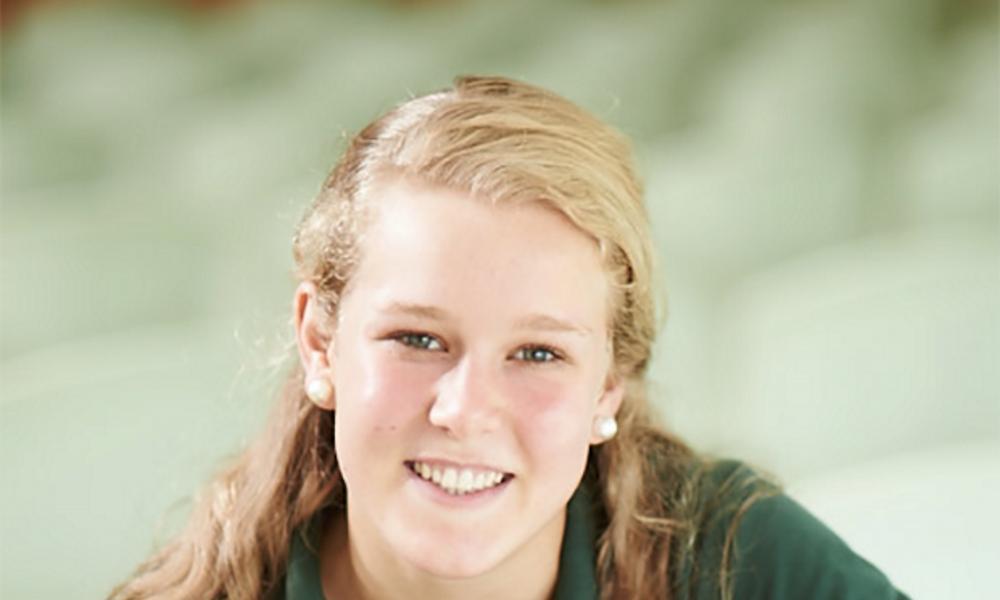 Matilyn Sarosi didn’t know what to expect when she decided to speak out on behalf of “juvenile lifers” – convicts who were sentenced while minors to life in prison without any possibility of parole.

She didn’t expect to make the national news. She didn’t know if she would hear from Pope Francis, to whom she had written for support. She couldn’t predict whether the voices of teens could influence a panel of judges.

But one thing she never imagined when she became an advocate were the letters. Stacks of them, written by convicted “juvenile lifers” from all across America, and delivered to Matilyn in care of Father Gabriel Richard (FGR) High School in Ann Arbor, where the young activist is a 17-year-old senior.

The notes and poems, as well as handmade cards and drawings, praise Matilyn for her courage, thank her for her commitment and remind her that even if her efforts on their behalf are not successful, she has given them something precious they have not felt in years – hope for the future.

“This started for me as an academic pursuit,” says Matilyn, the daughter of Kimm and Mike Sarosi of Ann Arbor, members of St. Francis of Assisi Parish. “But I’ve grown so attached to this issue. I feel really passionate about it because of the people I have seen through these letters.”

In talking with her aunt, Matilyn learned that the law would now prohibit juvenile offenders from being sentenced to life without parole, but that those who are currently serving life sentences for crimes they committed as minors – in some cases already decades long – would not be reconsidered. “It didn’t make sense to me that this practice would be unconstitutional going forward, but that hundreds of people who were given unfair life sentences will never have the chance to be paroled,” she says.

Matilyn’s aunt explained that teenagers within her school community would have “standing” to submit an amicus curiae, (“friend of the court”) brief to urge the Michigan Supreme Court to apply the ruling of the U.S. Supreme Court retroactively.

“We’re a group of teenagers, similar to those who were sentenced at the time they committed their crimes,” Matilyn explains. “Also, we’re a faith group and our faith compels us to social justice. So those two things gave us legal standing.”

Before she undertook the task of writing the brief, Matilyn had to get her schoolmates to buy into the idea. She worked with Father Richard Lobert, chaplain and theology teacher at FGR, preparing a presentation for every theology class in the school explaining the issue, the social justice perspective and the premises of the amicus curiae brief. In all, about 450 students, or roughly 85 percent of the school, agreed to support the document.

The next step was to write the 18-page brief, something Matilyn did with minimal guidance from volunteer attorneys at Ann Arbor’s Miller Johnson law firm. She based her arguments on two principal points: teens are hard-wired to make mistakes, and our faith teaches that redemption is always possible.

“We students at FGR may have different circumstances due to socioeconomic status and family support, but all teens face difficult choices as they grow, so we have that in common,” Matilyn says. “One of our arguments is that teens are susceptible to negative influences, and, to a certain extent, peer pressure and the lack of confidence and the turbulence of adolescence are similar for us all.”

Matilyn also pointed to scientific research on the maturation process of the adolescent brain, which now clearly indicates that teens and young adults are still developing the parts of the brain that control impulsive behavior and risk-taking.

“But we also focused on what our faith teaches about prisoners and redemption,” Matilyn says. “Restorative justice is a big focus of the Church. There’s no doubt that the crimes these offenders committed were serious, and not everyone would be appropriate for parole. But at the same time, punishment must serve a purpose and we still have to consider the dignity of the person. Our faith teaches we must have justice and mercy in equal measure.”

“It’s an emotional subject. You’re dealing with people’s lives – people who will die in prison and people whose loved ones aren’t here because they were killed,” Matilyn says. “There are victims involved and there’s a lot of hurt and pain there.”

In July, the Michigan Supreme Court decided not to revisit the sentences of “juvenile lifers,” but a federal court case might still allow those prisoners to be eligible for parole.

No matter how it turns out, Matilyn has seen the impact of hope on the lives of prisoners. “When you see the faithfulness expressed in the letters,” Matilyn says, “people saying, ‘even if it doesn’t help me, it is so good to know someone cares about us. God bless you’ … ‘God has great plans for your life’… That’s been a really humbling lesson from all this that I didn’t expect.”