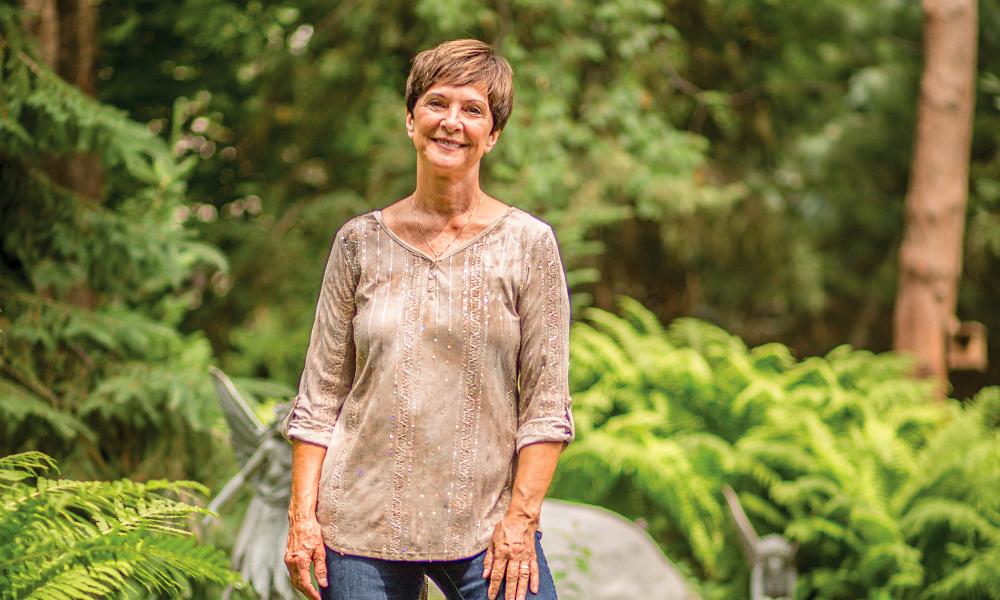 Marsha is 'called by name' to come back to the Church

And [Jesus] said, “There was a man who had two sons. And the younger of them said to his father, ‘Father, give me the share of property that is coming to me.’ And he divided his property between them. Not many days later, the younger son gathered all he had and took a journey into a far country, and there he squandered his property in reckless living.” (Lk 15:11-13)

“I come from a long line of devout French Canadian Catholics who settled in a small Kansas town in the 1800s. My father was one of 16 children who said the rosary as a family every night. When he married my mother, she converted – and my grandmother made them promise they would raise my sister and me in the Catholic Church.

“As a child, I received all my sacraments and was very involved in our home parish. In college, I fell in love with a young man raised in the First Christian Church. At school, I attended services with him and his family every Sunday.

“When we decided to get married, I asked him what his mother would think if we got married in the Catholic Church. Without hesitating, he said, ‘It would kill her.’ He was so definite in his answer I never dared mention it again. I told my parents we were marrying in the First Christian Church without ever considering their feelings.

“My Aunt Treva loved Jesus, and had made it her goal to save everyone in the family. After my children were born, I received a touching note from her saying she was praying for me and my little boys. She enclosed a book titled More than a Carpenter. I didn’t know why she had sent it to me, and claiming I was too busy to read it, I put it away and soon forgot about it.

And when he had spent everything, a severe famine arose in that country, and he began to be in need. So he went and hired himself out to one of the citizens of that country, who sent him into his fields to feed pigs. And he was longing to be fed with the pods that the pigs ate, and no one gave him anything. (Lk 15:14-16)

“Life unfolded a little differently than I had planned. My husband’s job changed, so we moved away from all our family and friends. I became extremely homesick and depressed. Our church life came to a complete halt. We totally turned our backs on God at a time that we needed him most. Our marriage ended in divorce,” Marsha explains.

“I accepted a job in Toledo, Ohio, and my sons and I established a new life there. We moved two more times, and finally, in 1989, I remarried. One final move in 1999 brought us to DeWitt, Mich. Since the time Aunt Treva had written me, we had lived in six different cities. What a strain I had made for my children’s lives.

But when he came to himself, he said, ‘How many of my father's hired servants have more than enough bread, but I perish here with hunger! I will arise and go to my father, and I will say to him, “Father, I have sinned against heaven and before you. I am no longer worthy to be called your son. Treat me as one of your hired servants.”’ (Lk 15: 17-19)

“A few years later, I began to feel guilt and remorse, and a constant tug at my heart. I would lie awake thinking about all the terrible things I had done in my life. One night, something made me reach over to the drawer of the nightstand next to my bed. My hand landed on the copy of More than a Carpenter Aunt Treva had given me years earlier. It had stayed with me through all our moves and all the changes – even through Aunt Treva’s death.

“That night, I decided to let Jesus back in my life. My son and his girlfriend were attending a large Protestant church in the Lansing area and invited me to join them. I soon began attending every Sunday. I got involved in the music ministry, connected with lots of people and made some close friends. The music was great, and the minister’s sermons offered me what I had been missing for so long – and this church had encouraged me to begin reading the Bible.

“I had even answered an altar call, recited the Sinner’s Prayer and had been told all my sins were forgiven. Still, I couldn’t convince myself of it. I longed to confess my sins as I had when I was a child child,” Marsha says.

“Over the 13 years I attended, I saw many people leave that church over issues that seemed personal and sometimes petty. I began to wonder if rather than people expecting the church to please them, shouldn’t they, instead, be trying to please Jesus?

And he arose and came to his father. But while he was still a long way off, his father saw him and felt compassion, and ran and embraced him and kissed him. 21 And the son said to him, ‘Father, I have sinned against heaven and before you. I am no longer worthy to be called your son.’ (Lk 15: 20-21)

“One day my son showed me a shortcut to the mall that happened to pass by St. Gerard Church. Every time I drove by, I felt someone was trying to tell me something. Finally, I called to see if I might be accepted back into the faith. I met with a deacon who helped me complete all the paperwork [related to the validity of my marriages]. Then I waited for the answer.

“Knowing all the sins I had committed since I left the Church, I was afraid to call fearing the answer was no."

Marsha had a friend call for her, and was thrilled to find out her marriage paperwork was approved, and she could receive the sacraments in good standing.

"The deacon asked me to come back whenever I was ready. I can’t tell you how excited I was that day.

But the father said to his servants, ‘Bring quickly the best robe, and put it on him, and put a ring on his hand, and shoes on his feet. And bring the fattened calf and kill it, and let us eat and celebrate. For this my son was dead, and is alive again; he was lost, and is found.’ And they began to celebrate. (Lk 15: 21-24)

“I wasted no time. After 48 years away, I had quite a large list for my confession. Meeting face to face, Father Paul Erickson made me feel as comfortable as possible. When I was finished, he blessed me and gave me my penance. I left his office feeling truly cleansed! My marriage was blessed that afternoon, and I received the Holy Eucharist that weekend.

“Every time I take Communion, I feel warm inside knowing I am accepting Jesus’ body and blood into my core. I wasn't sure I was worthy to be a [extraordinary minister of holy Communion], but the people at St. Gerard made me feel that Jesus would approve,” Marsha says.

“It’s like the Bible says. Even after all the sins I committed, the Church looked at my past and showed grace,” Marsha laughs through tears of joy. “Thank you, Jesus!”

Has a loved one left the church?

The Diocese of Lansing invites you to a two-day conference to better equip you to support your loved ones. The Called by Name conference will help you learn how to invite those you care about back to the Church. On Oct. 21-22, parishioners and clergy will gather at the Summit in Dimondale. For more information, visit www.CalledByName2016.org