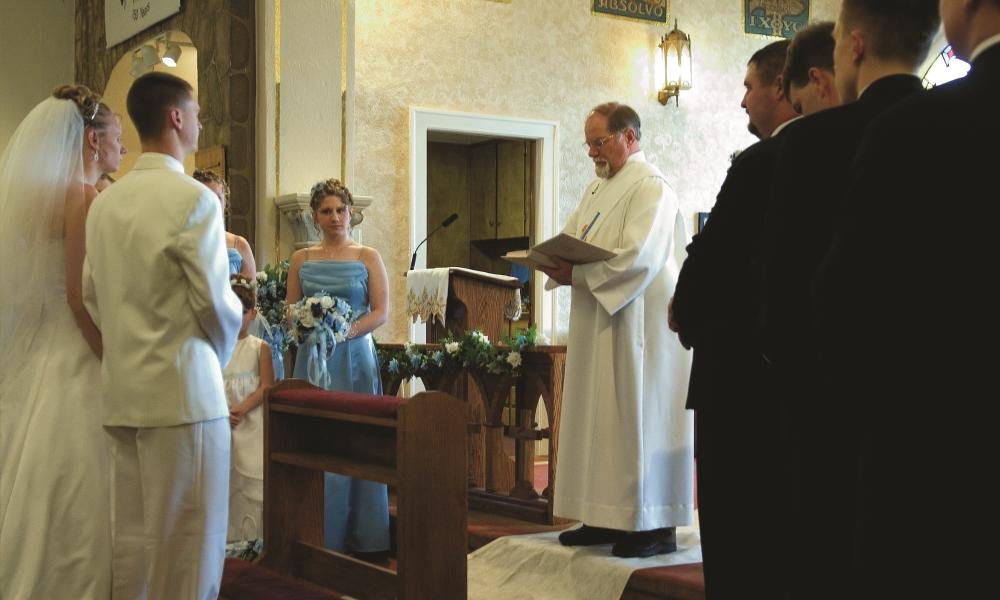 The sacrament of marriage reflects God’s love for his people; it is therefore beautiful and appropriate that it take place in the community of believers in the sacred space of worship – the church. This understanding of marriage has evolved throughout the years, however.

During the early church, Christians got married within the framework of their cultures. At least some of the Apostles were married; we know Peter had a mother-in-law, for example. Marriage was principally a legal institution, but Christians began to see the parallels between the committed love of a man and woman with the love of Christ and his church. It was not until the 12th century that the church recognized marriage as one of the sacraments.

A Catholic wedding ceremony takes place within the assembly of believers, and is unique because it is not administered by a priest or deacon. The ministers of the sacrament are the bride and groom themselves; the priest or deacon acts as the church’s official witness.

The wedding can be embedded in a Mass, or be part of a Scripture service. Generally, couples who are not both Catholic choose the latter option, which is structured around the Liturgy of the Word and the nuptials, but does not include the Liturgy of the Eucharist.

A procession begins the liturgy – it is often somewhat more elaborate than many other liturgical celebrations. Some brides still choose to be ‘given away’ by their fathers, a tradition rooted in the custom of the bride’s father and the groom exchanging money for a wife in front of a magistrate. Other couples choose to highlight the partnerships they are undertaking and the nurturing they have received from their parents. They may elect to process down the aisle on the arms of both their parents and symbolically bid them farewell at the steps of the sanctuary.

The presider leads the assembly in prayer and gathering, and the Liturgy of the Word follows. The readings are selected by the couple to reflect their understanding of the nature of marriage and faith. The presider usually offers a brief homily emphasizing the points of the readings.

The bride and groom then stand before the assembly and, in response to the presider’s questions, consent to the marriage they are about to undertake. They join hands and turn to each other, speaking the vows that unite them as husband and wife. They are married at the moment they have finished speaking, before the rings are exchanged or the final blessing imparted.

If the wedding takes place in the context of the Mass, the Liturgy of the Eucharist follows. The sharing of Communion reflects the unity of the couple and of the entire congregation as members of Christ’s body.

The priest or deacon then blesses the couple and prays for them to have a rich and fruitful life together; he enjoins them to be witnesses of Christ’s love to each other, their children and the whole community. They go forth as a visible sign of covenant – their fidelity to each other mirrors God’s fidelity to each of us.

Liturgist: The liturgist is a person specially trained in the form and rubric of the church’s public worship. The liturgist is expert at selecting appropriate music, prayers and petitions. Usually, the liturgist is also responsible for training the other lay ministers who assist at Mass – lectors, altar servers, extraordinary ministers of holy Communion and others.

The kiss (or handshake) of peace:

Why do we pause in the middle of Mass to shake hands or hug the people around us? This gesture arises from Christ’s injunction to reconcile with each other before laying our gifts at the altar. We are symbolically making peace with any one of our sisters and brothers against whom we may have a grievance – before we join them in the ultimate act of unity, Communion. The kiss of peace has its origins in the earliest days of the church; St. Justin Martyr speaks of it as early as the second century – “When we have completed the prayers we salute one another with a kiss, whereupon there is brought to the president bread and a cup of wine.”

Solemnities are the church’s most important celebrations – some are part of the universal church and some are particular to a specific country, parish or religious order. For example, St. Patrick’s Day is a solemnity in Ireland. Feast days are slightly less important celebrations, usually in memory of a specific saint. Memorials are celebrations of other saints and events – some of them are commemorated by the whole church and some by smaller groups. The liturgical color for solemnities and feasts is usually white, or red for a martyr.

The miter is the tall peaked hat that bishops wear. Its two shield-shaped halves are said to represent the Old and New Testaments. Two strips of fabric called lappets hang down the back. Originally, the lappets could be tied around the chin to prevent the miter from falling off while the bishop was on horseback. The miter is laid aside while the bishop prays. Underneath the miter, the bishop wears a zucchetto, a skullcap which was originally devised to keep hair oil off the miter.

The vessels used for the consecration of the bread and wine receive special treatment when it is time to clean them. They are washed in a sink called a sacrarium that is located in the sacristy (the small room near the sanctuary where the priest vests). The sacrarium’s drain flows directly into the ground rather than into the sewer or septic system.