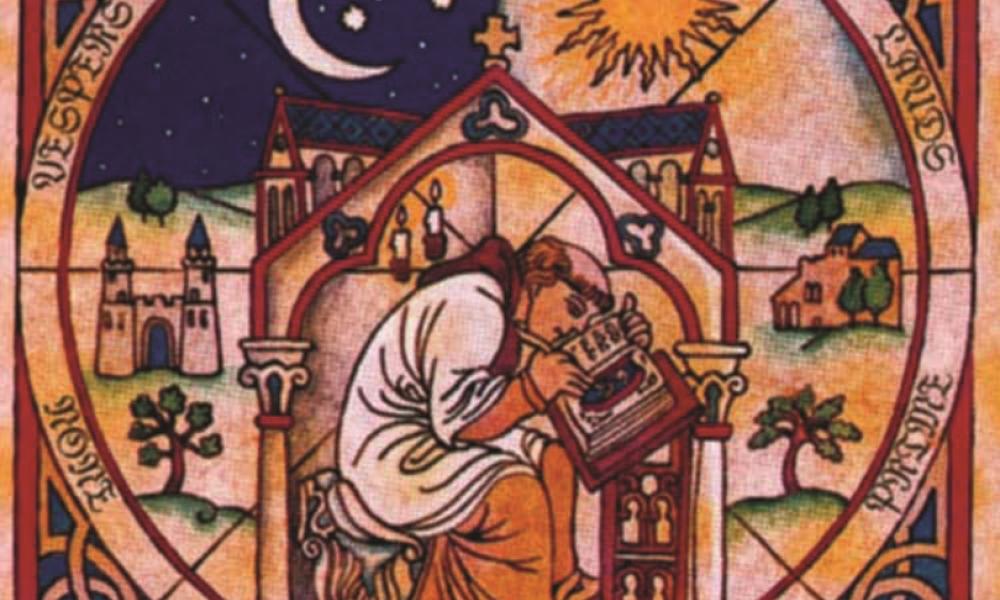 Although, when we talk about liturgy, we generally think about the Mass, there are other beautiful liturgies. Liturgy is the public prayer of the church, and one of its expressions is in the Liturgy of the Hours. This ancient pattern of prayer is also called the Divine Office, or official prayer of the church, and was required to be said daily by those who were ordained or in religious orders. Vatican II restored this liturgy to the whole people of God, and it has become increasingly popular in recent years.

Christians borrowed the custom of reciting specific prayers at specific times from the Jews, who interspersed prayers and psalms throughout the hours of the day. The Apostles followed the Jewish prayer elements of psalms and readings from Scripture, to which, over time, were added readings from Christian Scripture.

By the Middle Ages, the Liturgy of the Hours or Divine Office had become fundamental activities of contemplative monasteries and convents, with each of the hours chanted by the choir.

There has been a growing interest in the Liturgy of the Hours among lay people recently. The 1971 reform of this prayer simplified its pattern – it now includes morning, midday, evening and night prayer, with a particular emphasis on morning and evening. A person who prays at those hours alone will read almost every psalm over the course of a month. Morning Prayer includes two psalms, an Old Testament canticle, a short reading and intercessory prayer. The Canticle of Zechariah (Luke 1:68-79) is part of Morning Prayer. Evening Prayer includes two psalms and a New Testament canticle, a reading, an intercession and the Canticle of Mary. (Luke 1:46-55)

If you are interested in this prayer, you could begin with the Book of Christian Prayer, which is a brief version of the full four-volume Liturgy of the Hours.

To experience this beautiful and ancient prayer of the church in its fullness, consider a weekend retreat at a contemplative monastery, where the Office is chanted at each of the appointed hours of the day and night. It lends a profound rhythm to each day that will affect you for a long time afterward.

Deacon: The deacon, or diakonos, is ordained to service. The deacon may assist the priest during the Mass, but cannot say Mass himself. Deacons are able to proclaim the Gospel, preach, baptize, conduct funerals and weddings outside of Mass. Deacons are also the ordinary minister of the cup at Communion.

We sit at Mass during the reading of the Old and New Testament Scriptures, during the homily, and again after Communion for some meditative prayer. The relative comfort of sitting should allow us to concentrate fully. During the Scripture readings, we can focus on the way God has spoken to his people throughout history, and realize that we still encounter God in radical ways in our own lives. The homily is a chance for the priest to explain the readings and the Gospel, perhaps enabling us to see them in a way we’d never considered before.

Ordinary time anything but ordinary. In addition to the seasons that celebrate a specific aspect of the mystery of Christ, there are 33 or 34 remaining weeks. In these weeks, we celebrate all aspects of Christ’s mystery. Ordinary Time begins the Monday after the Sunday following Jan. 6 and continues through the Tuesday before Ash Wednesday. It begins again on the Monday after Pentecost and ends before the first evening prayer of the first Sunday of Advent. The liturgical color for ordinary time is green.

The cope is a long mantle or cape, worn around the shoulders and fastened at the chest with an ornamental clasp. For years, it was used simply as a cloak for warmth and gradually came to be specialized as a vestment for the chant of the Divine Office. Copes were particularly associated with cantors. Today, the cope is worn by priests, bishops or deacons during ceremonial functions other than the Mass.

Despite accusations to the contrary, Catholics do not pray to statues. Statues in churches are there to remind the faithful of certain aspects of God and the saints – and to facilitate spiritual emulation. From the church’s earliest days, tombs were decorated with representations of Jesus, saints and biblical scenes. As Christians built churches, statues of Jesus were common – depicting him as a shepherd, working miracles, or rising triumphantly from the dead. The cross was also a common icon, but the crucifix – depicting Christ’s agonizing death – did not arise until the sixth century.