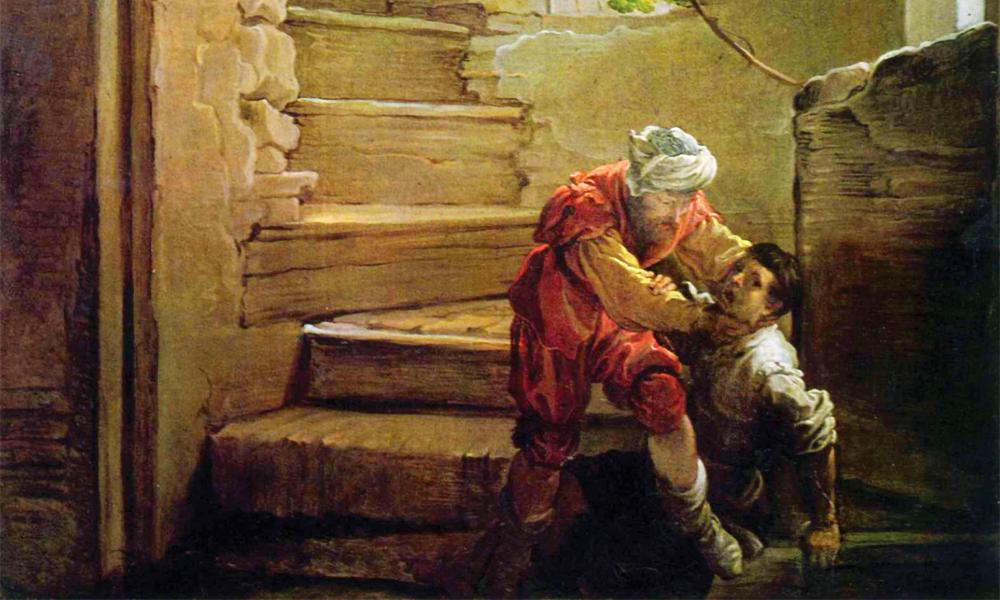 Lessons in Mercy: The unforgiving servant

The Parable of the Unforgiving Servant (Mt 18:21-35) challenges each of us to respond to the immense mercy we have received from the Father by showing that same mercy to our neighbor. At the same time, this parable reminds us that there are serious consequences for our failing to do so.

The parable begins with Peter asking Jesus, “Lord, if my brother sins against me, how often must I forgive him? As many as seven times?” Jesus replies by telling Peter that he must forgive not seven times, but 77 times.

To illustrate, Jesus then tells the story of a king who was owed a huge amount by one of his servants. The New American Bible (NAB) makes it clear that the servant’s debt was so great that it would have been impossible for the servant to have ever satisfied it. Because the servant had no way of repaying the debt, the king intended to sell the servant, along with his family and property, in order to recoup at least some of the amount due.

When the servant heard this, he begged for more time to repay the debt – an empty gesture given that the debt was beyond the servant’s ability to repay. Nonetheless, the king was so moved with compassion that he not only did not sell the servant and his family, but forgave the entire loan outright.

Now this same servant then encountered another servant who happened to owe him some money, albeit an amount akin to a single day’s wages. Choking the debtor, the first servant demanded payment. When this other servant begged for more time to repay the debt, the first servant refused the request and had the second servant put into prison until the debt was repaid in full.

When the king found out, he summoned the first servant. Outraged, the king said, “I forgave you your entire debt because you begged me to. Should you not have had pity on your fellow servant, as I had pity on you?” The king then had the servant tortured until he paid back the original loan in full – again, this would have meant an endless punishment as the servant would not have been able to ever repay the debt.

Jesus concludes the parable on a very ominous note, saying that the same fate awaits each one of us if we fail to forgive others from the heart.

‘It is in pardoning that we are pardoned’

The lesson of this parable is clear. As the NAB puts it, the Father’s forgiveness, which we have already been given, will be withdrawn at the final judgment if we do not imitate this forgiveness in our relationships with each other.

Here again, we confront one of the seemingly immutable rules of the kingdom of God: What we do to others will be done to us – eternally! The Gospels are clear on this: “Forgive us our debts, as we forgive our debtors” (Mt 6:12); and “Stop judging and you will not be judged. Stop condemning and you will not be condemned. Forgive and you will be forgiven. Give and gifts will be given to you … For the measure with which you measure will in return be measured out of you. (Lk 6:37-38)

The Catechism of the Catholic Church can perhaps help us understand why this is the case. It explains the outpouring of God’s mercy, which far exceeds any mercy we could hope to extend. This mercy:

… cannot penetrate our hearts as long as we have not forgiven those who have trespassed against us. Love, like the Body of Christ, is indivisible; we cannot love the God we cannot see if we do not love the brother or sister we do see. In refusing to forgive our brothers and sisters, our hearts are closed and their hardness makes them impervious to the Father’s merciful love; but in confessing our sins, our hearts are opened to his grace.(2840)

The grace we need

Since our heavenly Father knows it is beyond us to not feel hurts or to forget offenses, he gives us the grace to do so through the sacrament of reconciliation. In this sacrament, we receive both the forgiveness of our sins and the challenge to have the same kind of compassion and forgiveness for those who have sinned against us. In short, we are liberated to be forgivers.

Confessing our sins opens our hearts to this gift of grace through which, as the catechism teaches, “the Holy Spirit turns injury into compassion and purifies the memory in transforming the hurt into intercession.” (2843) In other words, through the sacrament of reconciliation, the Holy Spirit can make our mind one with the mind of Jesus Christ.

It is our confessing and dying to sin through the gift of God’s grace that allows the “mind of Christ” to well up within us through the power of the Holy Spirit. Only then are we free to forgive as Christ forgives. Only then do we participate in the forgiveness of the Father, who does not wait to give forgiveness until it is asked for and who offers reconciliation to the offender. Only then do we participate in that eternal communion for which each one of us was created.

“... neither thou read it, nor write it, nor speak it, nor yet suffer it be read, written, or spoken, of any or to any but if it be of such one, or to such one, that hath by thy supposing in a true will and by an whole intent purposed him to be a perfect follower of Christ not only in active living, but in the sovereignest point of contemplative living.”

These words are from the spiritual classic The Cloud of Unknowing. They remind us that the spiritual life consists both of contemplation and action. We do not know who wrote this book, but it dates back to the second half of the 14th century. Written in Middle English, it seems to be a guide directed to young monks seeking God. It argues that the way to know God is to surrender one’s mind and ego to the realm of “unknowing,” a state wherein God’s particular attributes and activities are transcended and God’s true nature can be glimpsed.

During this Year of Mercy, consider adding this book to your list of spiritual reading, and taking it up on its challenge to grow into an ever-more intimate relationship with God.