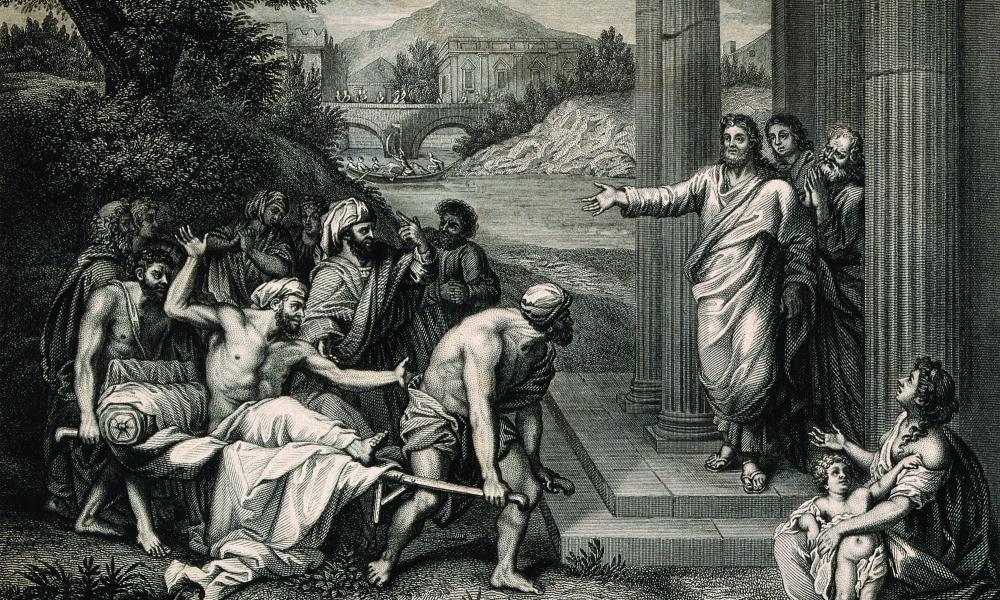 Lectio Divina – Praying through the year with Scripture

When Jesus returned to Capernaum after some days, it became known that he was at home. Many gathered together so that there was no longer room for them, even around the door, and he preached the word to them. They came bringing to him a paralytic carried by four men. Unable to get near Jesus because of the crowd, they opened up the roof above him. After they had broken through, they let down the mat on which the paralytic was lying. When Jesus saw their faith, he said to the paralytic, “Child, your sins are forgiven.” Now some of the scribes were sitting there, asking themselves, “Why does this man speak that way? He is blaspheming. Who but God alone can forgive sins?” Jesus immediately knew in his mind what they were thinking to themselves, so he said, “Why are you thinking such things in your hearts? Which is easier to say to the paralytic, ‘Your sins are forgiven,’ or to say, ‘Rise, pick up your mat and walk’? “But that you may know that the Son of Man has authority to forgive sins on earth” – he said to the paralytic, “I say to you, rise, pick up your mat and go home.” He rose, picked up his mat at once and went away in the sight of everyone. They were all astounded and glorified God, saying, “We have never seen anything like this.” (Mk 2:1-12)

After you have read these verses, pause and ask God to show you what he wants you to see, to understand, to imitate. Then read the passage again, slowly, out loud.

Then read my commentary below, slowly.

Prior to the event recorded in these verses, Jesus had been spending some time preaching in the area around Galilee, but now he is returning to spend time preaching in his adopted hometown of Capernaum. Word spreads quickly, and the crowd around and near the house is overwhelming. As Jesus begins to teach and to preach the truth, four young men approach, carrying their paralyzed friend on a stretcher — wanting to bring their friend to Jesus. But they cannot get near. The crowd is too big … do they give up? No. quite the opposite! They climb to the roof of the house — not an easy task when you have to carry a grown man on a stretcher who cannot help himself. But they were true friends. Are we? Am I? Do I put myself out for friends? Do I really seek to bring people into God’s presence? Am I willing to sacrifice time and energy to do that?

When they get on the roof, they begin to remove part of it. They remove the clay, the mud, the branches used to make a covering. Did you ever stop and think what it would have been like for those in the house? Here they are trying to listen and mud and clay start falling down on them. This is a potential distraction for all those listening; some may have even left. What do we do when we are trying to listen to something important and are distracted by noise around us? Apply this to a time of prayer: When we are praying, we have to shut out the noise around us; otherwise it can distract us from hearing what God wants us to hear, to receive.

A second application for these verses is this: The paralytic’s friends find a way to bring him to Jesus. A way to express the same concern in our day is this:

Bring your loved ones and friends to Jesus daily and intercede for them. Pray daily and never give up. Never give up! God hears every word of your prayer, but he never violates the free will he gave each of us so we keep praying until the loved one yields to what God is offering. (More on that topic in my book Pray and Never Lose Heart.)When the friends actually lower their companion to the feet of Jesus, what does Jesus say? Note this carefully. Scripture tells us that when Jesus saw their faith, he turns to the paralytic and says, “Your sins are forgiven you.” The man was hoping for physical healing, but look at what God had in store for him! Jesus gave him what he, perhaps, didn’t even know he needed most — the forgiveness of sin, which then set the stage for physical healing as a sign that God had healed the far deeper wound. How do we deal with our own sin? Do we go quickly to Jesus and ask for mercy, ask for forgiveness, or do we just hide and excuse ourselves? Sometimes that approach can lead to self-hatred or loss of hope. Remember that Jesus always forgives and always desires to bless.

Another very important point of the drama is this: Right in a holy and miraculous moment when the crowd is rejoicing, the Scribes express anger. Basically, they are shocked by what Jesus is saying and doing. Who is this man who says he forgives sin? Only God can forgive sin. They exhibit pride and think that perhaps their position of authority is being ignored because the crowd is listening to Jesus and not to them. Then, they don’t ask Jesus genuine questions and seek to learn; they don’t seek to understand. We, sometimes, can act like this. Perhaps God is showing us something about ourselves that we don’t like — do we turn away? Ask God to help us to humble ourselves and be honest with him. Don’t let pride keep you from the gifts God has for you!

As you read this article, perhaps Jesus is offering you forgiveness or healing of some kind and you may ignore it because it means facing yourself, asking the questions that reveal your own pain. Maybe it is a lack of faith; maybe there is little hope in our own heart of God’s love for you. Remember: God wants, in Christ, to befriend you and bring you to peace and joy in his presence.

May this reflection draw you closer to him, where he can speak to your heart and give you his peace.