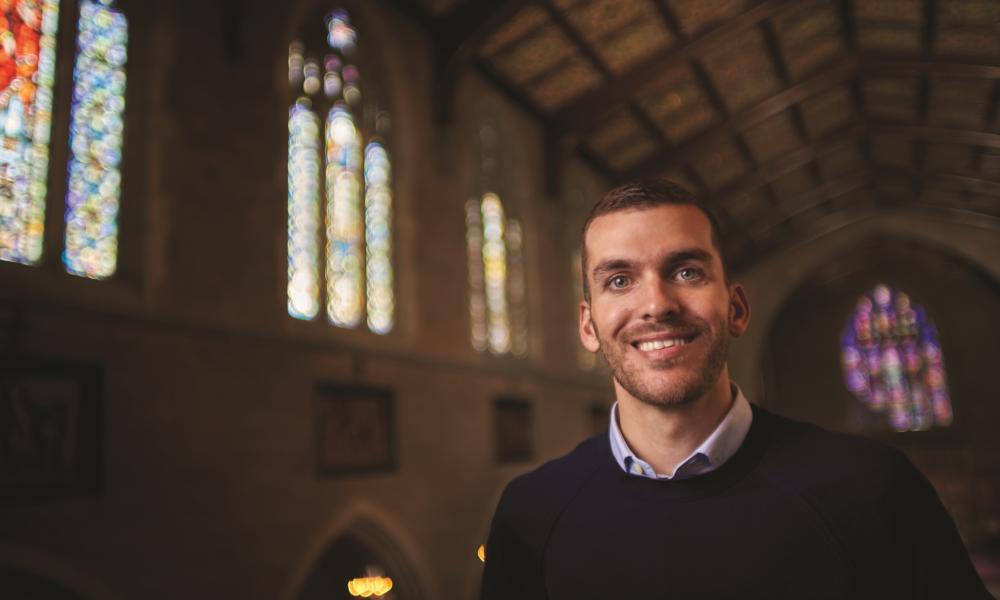 Seminarian Tyler Arens is like most Catholics. That’s the first thing he wants you to understand. He always felt God calling out to him, but not in a “part the Red Sea, cast seven plagues” kind of way.

He attended the University of Michigan, took a job after graduation in 2008 in the Office of Financial Aid at Michigan State, bought a house, stocked it with cultural comforts and generally enjoyed his social life.

Tyler regularly attended Mass at St. Thomas Aquinas Parish in East Lansing, and was involved in a number of young adult groups, including i.d.9:16 (a group that exists to form young adults into intentional disciples of Jesus). He felt he was doing good work for the Lord within the societal norms expected of him. But something continued to pull at Tyler beyond his current ministry.

“As someone a little older, I’m 30 now, you have more attachments, more relationships that you build up over your career, but there has been something persistent working at me my entire life,” Tyler says.

Was it the priesthood? The challenge for Tyler was deciphering God’s message for him, but before he could fully interpret that message, he needed to make a few changes in his relationship with the Lord. “I wasn’t at a place with God that I could really trust and know how he was calling me,” Tyler says. “I think that’s a challenge for all of us – are we truly committed to our relationship with God?

“About two years ago, there was a pivot for me. I made the decision to be more intentional about my faith. That was a beginning for me of really striving for a deeper relationship with the Lord. And it was through that relationship that I was able to understand his will and the way he was calling me.

“I don’t pretend that was easy. I know how daunting it can be, especially when you’ve been out in the world after college, and you’ve got friends, and a house, a car and the things you like – and that’s why you must really ask for his intervention.

“The Lord gave me the grace to start changing the way I looked at my own life, and I was able to put him at the center of my life. Instead of focusing on what I would be giving up, he allowed me to see all I'd have to gain, even if it couldn't be fully understood yet.

“That’s a huge change in your mental and spiritual approach, and I only got there because of God’s grace and patience.”

Tyler attended discernment groups with Father John Linden, the director of seminarians and chair of the Department of Vocations. He also joined a discernment group with Father Dan Westermann (then parochial vicar at St. Thomas Aquinas) because, even though Tyler was drawing closer to God and the path set before him, he needed further direction and conversation.

“I think there’s a myth that you have an ‘A-ha’ moment where you’re hit on the head by lightning and you just know that you’re supposed to be a priest or you’re supposed to join the seminary, but it rarely happens that matter-of-factly,” Tyler says.

“I needed to talk about it.”

There is another misconception about discernment groups: that they exist to talk men into becoming priests.

“Never once did I feel any pressure – you have to be there of your own accord,” Tyler says. “If you were to drop in on one of these meetings, and didn’t know what it was about, you would have thought this was a discussion amongst men seeking to grow in their identity as Christians.

“It’s simply a chance to get together with like-minded individuals who have the same questions you do about faith, about your relationship with the Lord, about what he’s calling you to do, about how to respond and about the fact that road may not ultimately lead to the seminary and the priesthood.”

Tyler grew closer and closer to God and to his final decision, but first he needed to cross one more hurdle – overcoming the fear of self-doubt.

“I think with millennials we want to be so sure we'll get it right, and we're afraid of taking risks sometimes," Tyler says. “We want to know how the end is going to look, but if you really focus in on Scripture, the Lord never said, ‘This is how it’s going to be, this is what to expect.’ He basically kept coming back to ‘trust, trust, trust. Trust me.’

“That describes my discernment in a nutshell, which is that I had to grow to a place of trust with him to ask the question, ‘How are you calling me?’ Then, I needed to be in a position to say yes. So it comes down to this: be not afraid. Those are the words St. John Paul opened his pontificate with, and they appear so frequently in the Bible.

“No matter what challenge we’re facing in life, no matter what question we are asking and being asked by the Lord, if we trust in him, we will not allow fear to hold us back.”

Tyler is presently in his first year of seminary, learning to become a priest, but also learning more succinctly what it means to be a true disciple of and partner with Christ.

“I think people have this idea of seminary being all these guys who have everything already figured out, and if you come into the seminary with that min-dset, that’s going to be quickly corrected,” Tyler says. “The end result may be ordination, but it’s that focus on your relationship with the Lord that comes first, because it’s truly through that relationship and understanding his voice better in your life that you can minister to others like he is calling each of us to do in some fashion.”

In August 2014, Father John Linden, director of seminarians and chair of the Department of Vocations, welcomed men to the annual Bishop’s Discernment Dinner, during which any interested man in the diocese has the opportunity to meet Bishop Boyea and some priests and seminarians from the diocese. After that dinner in 2014, Father John hosted an overnight discernment retreat, creating an opportunity for further discussion among peers asking themselves what God is calling them to do.

Out of this event, The Foundation was created as a monthly Saturday morning gathering at the St. Francis Retreat Center in DeWitt, St. Thomas the Apostle Parish in Ann Arbor and the Catholic Men’s House in Flint.

“There is so much good that comes out of being with a group, not the least of which is knowing that you are not alone,” Father John says. “There are all these great guys thinking just like you, and it lends legitimacy in a man’s mind that, ‘This is not just me. There is something real about this internal dialogue I’m having.’”

Only some of the men who attend The Foundation will ultimately pursue seminarian life, and fewer still will become priests, but everyone benefits from the support and encouragement of peers.

“It’s a low-key, no-pressure atmosphere,” Father John adds. “The reality is, even though most of these guys won’t ultimately be ordained, they will come out of these discernment groups more open to the help of God and others in their decision-making, and will be more able to help others realize God’s call, too.

“The No. 1 killer of vocations is fear, fear of commitment, and that’s not just in discerning priesthood – that’s true for marriage and for anything in life we are called to do. And this is a place where you can discuss that fear with others, and overcome that fear.”