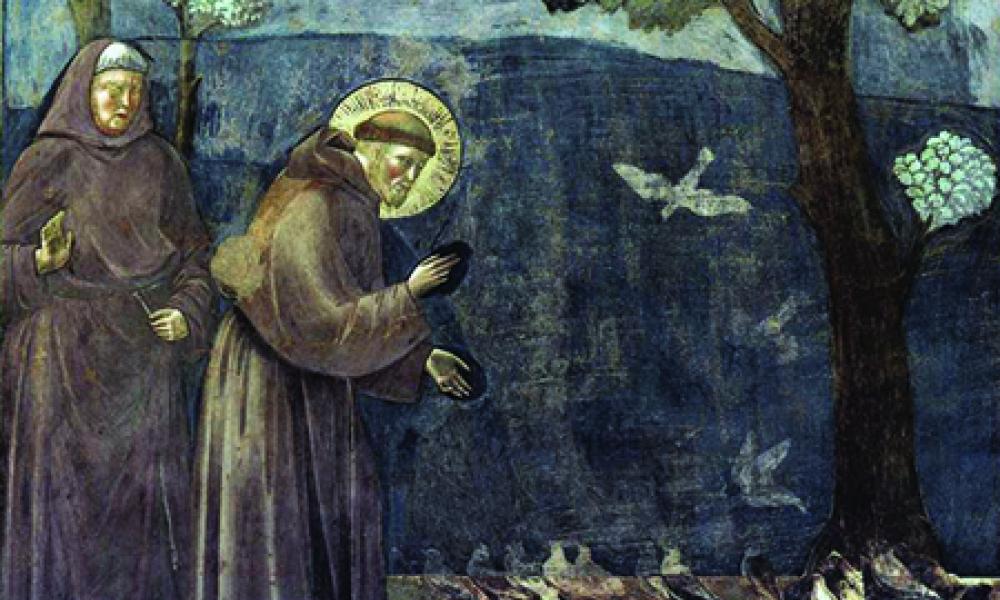 On June 18, 2015, Pope Francis’ long-awaited encyclical on ecology was released to the world. The encyclical, as has historically been the case, takes its name from the first few words of the encyclical: Laudato Si’ –  literally “Praise be to you.” These words, in turn, come from the opening line of the Canticle of the Creatures by St. Francis of Assisi, who continues to greatly influence the pope.

Laudato Si’ represents an attempt to “enter into dialogue with all people about our common home.” (3) Pope Francis explicitly states that he hopes this encyclical “can help us to acknowledge the appeal, immensity and urgency of the challenge we face.” (15) This challenge, of course, is the current ecological crisis confronting the world.  The pope seeks to call the whole human family to work together “to seek a sustainable and integral development” that alone can address this crisis. (13) In other words, the pope is calling for “a new dialogue about how we are shaping the future of our planet” that includes everyone. (14)

The pope makes a point of the fact that the current ecological crisis is made up of a great number of factors and has been caused, at least to some extent, by humanity itself. The pope indentifies an anthropocentricism (a putting humanity at the center of existence), combined with an inordinate emphasis on technology and power, as the primary culprits.

In terms of humanity’s negative impact on the environment, the pope cites pollution, waste and the “throwaway culture” as key contributors to climate change, with all its “grave implications.” (25) The depletion of natural resources (fresh drinking water being of perhaps the greatest import) and the loss of biodiversity are also components of the ecological crisis caused by humanity.

At the same time, the crisis also encompasses the adverse impact on humanity by humanity itself. The decline in the quality of human life, the decline in respect for human life, the breakdown of society and global inequality are just a few of the examples the pope treats in the encyclical.

To understand Pope Francis’ approach to the current ecological crisis, it is critical to understand the worldview from which he writes, that is, an authentic Catholic worldview. This worldview holds that everything is closely related. In other words, nature “cannot be regarded as something separate from ourselves or as a mere setting in which we live. We are part of nature, included in it and thus in constant interaction with it.” (139)

Consequently, there are not “two separate crises, one environmental and the other social, but rather … one complex crisis which is both social and environmental.” (139) If one wants to seriously undertake the work of overcoming the great challenges posed by this one complex ecological crisis, one needs “a vision capable of taking into account every aspect of the global crisis.” (137)

Therefore, the pope reasons that the current crisis calls for an “integrated” ecology if we have any hope in overcoming the great challenge that stands before humanity. This means creating an ecological culture that does more than simply respond to immediate problems. Instead, there “needs to be a distinctive way of looking at things, a way of thinking, policies, an educational programme, a lifestyle and a spirituality.” (111) An “integrated” ecology demands that everyone be included in the discussion: science, religion, politics, the arts, the poor, etc., so that all these specific areas of knowledge and experience can be “integrated into a larger vision of reality.” (138)

The Reaction of the U.S. Bishops (USCCB)

Archbishop Joseph E. Kurtz, of Louisville, Kentucky, and president of the USCCB, issued an official statement to mark the occasion of the promulgation of this newest encyclical. The archbishop noted that the pope had drawn extensively from the teaching of his predecessors and was teaching the faithful, and all people of good will, “that care for the things of the earth is necessarily bound together with our care of one another, especially the poor.” He went on to write that the question that is at the heart of this encyclical is the same question asked by Pope Francis in paragraph 160: “What kind of world do we want to leave to those who come after us?”

An encyclical letter is a high-level teaching document that expresses the pope’s thoughts on matters of faith and morals. Encyclicals may be to the entire Church, a particular Church or people, or to all people of goodwill. Encyclicals do not constitute ex cathedra (“from the chair”) pronouncements, i.e., they do not have infallible authority. However, they are important in that the pope is fulfilling his role as pastor and teacher.

Here is a look at the number of encyclicals issued by recent popes:

Although ecology and climate change have been addressed by popes in the past, Laudato Si’ is the first encyclical devoted exclusively to the topic of ecology.

Pope Francis referenced and/or quoted no fewer than 17 different bishops’ conferences from all over the globe in Laudato Si’ demonstrating that the universal Church has long been engaged in questions about ecology.

Latin America and the Caribbean

Albert Einstein (1879-1955) was the most influential physicist of the 20th century and probably best known for developing the theory of relativity. Here is what he had to say about life and humanity’s place in the world – thoughts that line up remarkably well with Pope Francis’ message in Laudato Si’:

A human being is part of a whole … He experiences himself, his thoughts and feelings, as something separated from the rest – a kind of optical delusion of his consciousness. This delusion is a kind of prison for us, restricting us to our personal desires and to affection for a few persons nearest us. Our task must be to free ourselves from this prison by widening our circles of compassion to embrace all living creatures and the whole of nature in its beauty. Only a life lived for others is worth living.

WHAT CAN WE DO?

In Laudato Si’ (211) Pope Francis provides us a list of a few of the “little daily actions” we can do to fulfill our duty to care for creation: