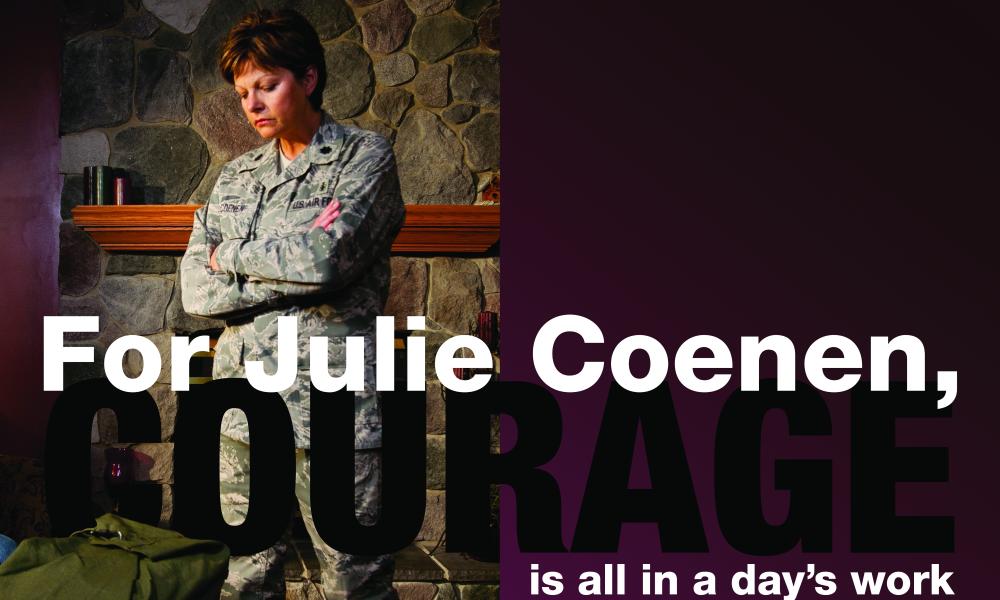 For Julie Coenen, Courage is all in a day's work

Asking Lt. Colonel Julia F. Coenen to define courage is like asking a fish to de-fine water. It flows so seamlessly through her life, defining it poses a challenge or this chief nurse of the 110th Medical Group in Battle Creek.

“I guess I’d say courage is what it takes to get through a difficult situation,” Julie says after some thought. “You may have a different definition than I do, but I’d say it’s taking that first step into whatever battle you’re facing.”

In her 28 years with the National Guard, Julie Coenen has taken many of those “first steps,” starting with her decision to join the Guard right out of high school.

“My boyfriend, Kent, and I both joined the National Guard in Omaha, Neb. Six years later, we got married and Kent’s job took us to Michigan. We decided to put down roots and buy a house in Charlotte.

“The night before we were scheduled to close on the house, my commander called, ordering me to report to Detroit at 0700 hours the next morning. I would serve in Operation Desert Shield/Storm. A few minutes later, Kent’s commander called ordering him up.

“I reported as ordered, but was able to return that night for the closing. We walked in and told the homeowners we didn’t know when (or if) we would be back. But we would buy the house if they would let us store our belongings in the basement while we were in the Middle East. They agreed.

“Over the next two days, friends helped us throw everything we had in boxes and move it into the basement of our new home. A day later, our unit reported to Fort McCoy, Wisc., for six weeks of training. After that, we shipped out.

“We spent our first week in a staging base outside Dammam, Saudi Arabia. Our quarters looked like a big circus tent near a landing strip. One hundred soldiers slept in rows of cots, went to the bathroom in rows of Port-a-Johns and listened to rows of mission-bound jets screaming overhead. The ankle-deep mud and the mess hall rats gave our veteran soldiers flashbacks to Vietnam.

“Scud missiles and the constant threat of chemical weapons worried us more. Our Patriot missiles took out multiple Scuds close to our permanent housing in Khobar Towers. Still, one Scud got through and destroyed a nearby warehouse, killing 26 Pennsylvania soldiers.

“I think fear of the unknown was the worst, though. Kent and  used to wonder: What if we had kids we’d had to leave behind? We agreed that if God blessed us with children, we didn’t want them to have both parents going into war. Since Kent’s commitment was coming up, we decided he would leave the Guard once we got home.

“After five months in Saudi, Kent and I returned home. We unpacked the belongings we had dumped half a year earlier, took a three-week ‘Celebrate Life’ trip, then settled back into our civilian work.

“A year later, the Army ordered me to take medical training.

I would have rather laid cable than deal with sick and injured bodies, but I headed down to Texas for four months of training to become an Army medic. I ended up loving it so much, I enrolled in nursing programs back home, earning my RN, then a bachelor’s in nursing and, finally, my master’s in nursing in 2005. As a civil-ian, I’m a certified nurse practitioner in family health.

“I actually needed a lot of courage to go back to school. Leav-ing a job and income behind was a leap of faith for Kent and me. We prayed a lot! But we’re firm believers that you have to keep moving forward and improving yourself every opportunity you get. We’re both glad we took that leap.

“In 1996, we welcomed Mia into our family. Shortly after her birth, I switched to the Air Force National Guard to become an officer. In 2001, Camille was born shortly before 9/11.

“As the news turned more ominous, I had a sense I would be called up again. When stories came on the TV or radio, I started to tell Mia, ‘Momma might have to go over and help those sol-diers some day.’

“April 1st, 2003, the senior health tech of the 110th called to give the news that orders had come down, and I needed to report the next morning for active duty. I had to prepare to be gone up to two years.

“I hung up the phone and turned to my oldest. ‘Mia,’ I said, ‘President Bush called and he needs me to go help the soldiers.’

For the first time in the interview, tears well up in Julie’s eyes and choke her voice. She clears her throat. “That’s the hardest thing,” she reflects, “leaving your family.

“Courage isn’t so much for me as it is for them. When I’m on deployment, that’s my job, but soldiers’ families’ are at home surrounded with memories. Maybe they curl up in the blanket you used to snuggle under or eat a favorite meal you used to share as a family, and think of you. I am so grateful to our friends at St. Mary Parish in Charlotte for the support they gave Kent and my girls through the six months I was deployed!

“I have always believed God has a plan, and when it’s my time I’ll have to go. So I shipped out to the Army Medical Center in Landstuhl, Germany, to serve in an orthopedic ward that treated combat victims.

“We saw lots of chest and brain trauma, not to mention burns. IEDs [Improvised Explosive Devices] are devastating. You don’t see shrapnel wounds like that in a civilian ER – amputated legs, mangled wrists, butt cheeks blown completely off.

“And yet these kids, they’re just kids, thanked me over and over again.” For the second time in the interview Julie’s eyes turn red.

“One Special Ops guy had part of his arm blown off. From his hospital bed, he said ‘Doc, (they all call nurses Doc) I just need a trigger finger. Send me back.’

“I told him I didn’t think that made much sense.

“He insisted, ‘It’s what I do, Ma’am.’” Julie pauses, then smiles. “There’s nothing better than taking care of soldiers. They give up their lives to protect yours. I think sometimes people forget we’re all for the same goal. We’re all a piece of America, but soldiers are that special part out there defending our country. “Life is so short and you never know, so I think you need to live it never taking anything for granted.

“You can feel scared to death, but if you don’t back down, you can do anything. The key is taking that first step. That step builds confidence and with confidence comes trust. It might not be pretty or easy to understand, but if you have faith you can make it through. I think then you realize courage is anything you want it to be.”