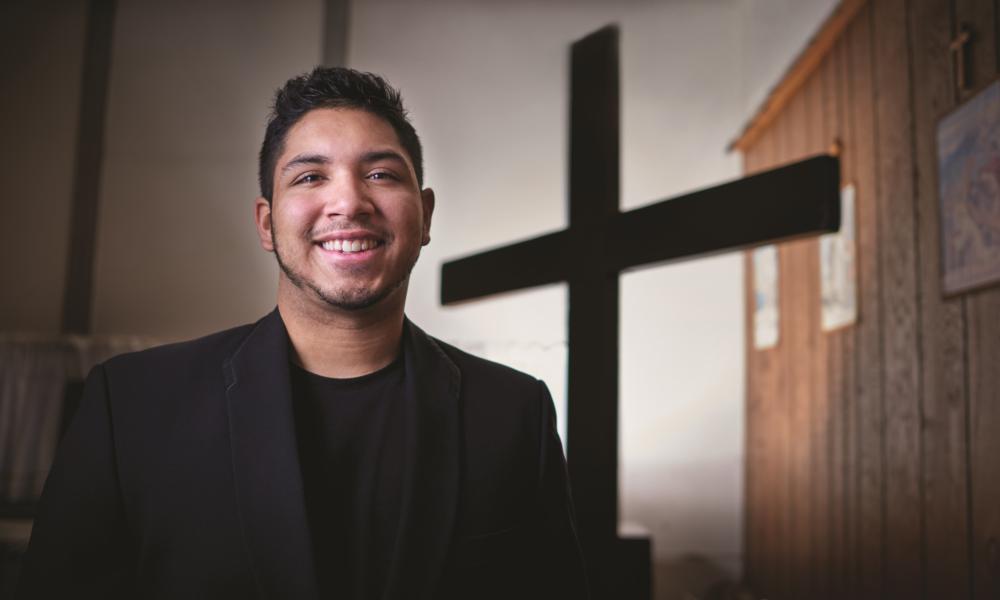 Jose stands in as Jesus in live Stations of the Cross

The loss of a loved one. Battling cancer. Mental illness. Self-doubt. A crisis of faith. Isolation. Loneliness.

Rich or poor. Young or old. Man or woman. Christian or Muslim. Each of us has a cross to bear. Some are heavier than others. Some stay with us longer than others. All of them require the strength of the Lord to help us carry our burden.

Jose Gallo’s cross is unique. Representing Jesus in the Cristo Rey Parish’s annual Good Friday Stations of the Cross march, Jose walks 13 miles, from the State Capitol in Lansing to his church, carrying a cross, enduring whips from soldiers and their ridicule, and, hopefully, receiving comfort from a gathering crowd.

The cross and whips may be props, but they leave physical marks and take their toll on Jose as he strives to re-create the hardship Jesus faced on his journey to crucifixion.

“It’s obviously a lighter cross than the one they would have used, but when you’re carrying it for a few hours, it gets heavy; and when the weather has been cold, and they hit you – not hard and not with the intention of hurting me – it can really sting,” says Jose, a junior at Michigan State University.

“The goal is not to cause me the same injury to the extent that Jesus did, because this is obviously acting, but I’ve always wanted the audience to relate, to be able to feel the pain Jesus endured. So that requires me getting hit and carrying the cross the whole way.”

Born in Venezuela, Jose immigrated to the United States with his mother 15 years ago to join a brother and grandfather in the Lansing area. He was raised in the Cristo Rey family, and still attends Mass there.

Jose says he understood from a young age how important his relationship with God was – reading the Bible as a child and joining the youth group when he was in middle school.

Jose could hear God’s call when he was quite young, asking him to set an example for his classmates and eventually for his larger community. It wasn’t long before God’s voice led Jose to the stage, and soon he was performing parish plays in front of 600 assembled congregants.

In his freshman year at Eastern High School, Jose first picked up the mantle of playing Jesus in the live Stations of the Cross, and immediately he realized the experience was life-altering.

“Playing Jesus sort of changed my faith – it made it more real,” he says. “I always felt I had a strong relationship with God and Jesus, but stepping into his shoes, it changed me.

He continues, “The last few years, I’ve spent much more time meditating, about two to three hours before we begin, so that I prepare myself emotionally for carrying the cross, for doing my best to truly imitate the struggle that Jesus faced. It’s incredibly powerful.”

During the three-hour walk, beginning at noon on Good Friday, Jose encounters many from his home parish, but also Catholics from the wider community. He can see the anguished look on their faces as he falls, as he is hit, as he cries.

“Especially when I get whipped, you hear people gasp and react with surprise and then sadness, because I think it becomes much more real for them to see it in person,” Jose says. “It’s not a movie. It’s not reading about it in the Bible. They’re witnessing the cross with their own eyes, and you definitely see people who turn away.

“Even though it’s not real, it’s realistic, and being there, it impacts you emotionally. I think it really makes everyone appreciate what Christ went through for us, and brings you closer to your faith at an important part of the Church calendar.”

Going forward, Jose isn’t sure how long he will remain in the position of Christ. He has already offered the lead to a younger cohort of parish members that he feels must take up the cross to strengthen the Church.

“One of my goals is to set an example for kids in grade school or middle school to help foster their faith and build the next generation of Catholic leaders,” says Jose, who is eager to embrace whatever God will ask of him post-college.

“I’m part of the Knights of Columbus, and I will look to expand my presence there. Then after I graduate, wherever life takes me, I will always stay involved.”

Whether this Easter season marks his final appearance or not, on April 14, you can find Gallo walking step by step with Christ, carrying the cross together.

“This is something I love to do – it draws me closer to God, and Christ, and my faith is so much more powerful because of this experience,” he says. “I hope everyone who attends the march finds it equally rewarding.”

Another way to celebrate Lent

St. Joseph Shrine, located on Iron Lake in Brooklyn, Mich., has outdoor Stations of the Cross down by the lake. The stations were completed in the 1930s with metallic colors on copper. Stones were gathered from all over the world and used in the construction of the scenes of several of the stations to represent that Christ died for the whole world. For more information on the shrine and the stations, vist stjosephbrooklynmi.com.