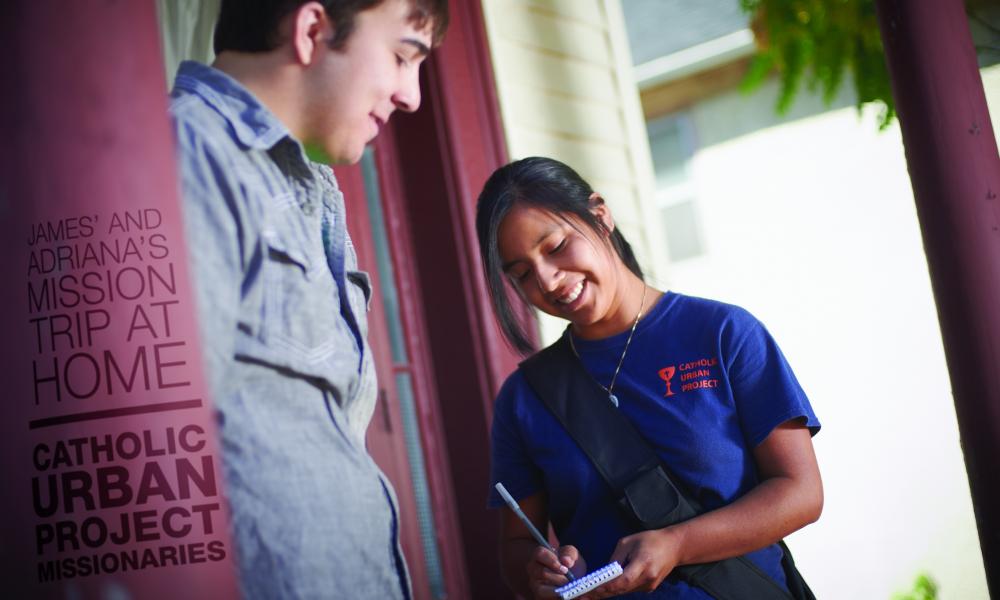 During the summer of 2011, James Pope became a Catholic missionary, entering a land where poverty has changed a once-thriving landscape to a scene of desolation. This summer, Adriana Perry walked the same heat-blistered terrain, carrying on the work James started last year. At the end of the eight-week missionary program, each returned home tired, wiser and in awe of the power of God.

This life-changing experience didn’t happen across the ocean, but in Southeast Michigan. James and Adriana worked with the Catholic Urban Project (CUP), started by Father Robert Roggenbuck as a way for the Catholic Church to serve the poor living in the urban areas of Ypsilanti and Flint.

Missionaries’ days are filled with service, prayer, faith exploration and community living. They serve the youth of the community by offering a kids’ camp Tuesday through Friday. On alternating days, the missionaries volunteer with nonprofit organizations, help neighborhood residents with home repairs and renovations, or evangelize by going door-to-door and asking for prayer intentions.

Adriana appreciates the boost the program gave to her prayer life. CUP built on her college experience of community prayer, as well as helped develop her personal prayer life. “It made me realize intercessory prayer is really essential,” Adriana says. “These people really need prayer and people really should be praying for them.”

Finding a CUP prayer card on a porch during a door-to-door visit was powerful for James. “If there’s one thing that told me, it’s the permanence of God’s work,” James says, “Even if you’re not there to see it, it happens.”

Sharing their faith with the residents of the communities they served, James in the parish of St. Michael’s in Flint and Adriana at St. John the Baptist in Ypsilanti, was done through service rather than talking about Catholicism or even Christ. Missionaries show compassion for people often ignored by society, using Christ’s example.

“He might have used me as a tool for his mercy and love,” James says with a smile. “I can’t say it’s anything that I merit, but it gives me hope that you can make a difference.”

Modeling Christ with acts of love is the most powerful tool for CUP missionaries. James remembers discussions with the children in the kids’ camp about why the missionaries went to Mass after camp ended each day. The children were told spending time with him in church during Mass was a way to show God the missionaries loved him.

“They wouldn’t always understand the commitment of going to church,” James says “but they understood it was important what we were doing.”

Adriana’s work for a pregnancy counseling center as a CUP missionary gave her the chance to help women overwhelmed with the challenges of their lives as mothers. Without passing judgment on the women, Adriana was able to listen or pray with them, and help the women feel valued and appreciated.

“I think that was a great way to just be there for someone,” Adriana says.

The door-to-door CUP ministry was a great challenge, but also rewarding. Besides an introduction and a request for prayers, missionaries followed no script. The “formula” was just simple conversation. They  were warmly received and the response was often humbling for them.

“Even people who didn’t hold our same beliefs were appreciative,” James says. “Sometimes we would sit on the porch and talk for 45 minutes.”

Adriana had an especially memorable afternoon going door-to-door in one Flint neighborhood this summer.

“I got to pray with pretty much everyone,” she says. “It was just like, ‘Wow, you guys are so open. I don’t think I would have been that open to sharing things that were going on in my life, but I’m glad that they were.’”

During his summer in Flint, James says CUP started “Prayers for Flint” on Monday nights in the chapel at St. Michael’s. Beginning with 12 people praying the intentions collected from the door-to-door ministry, the group by the end of the summer grew to 45 people sharing music and prayer as they prayed for the people of Flint.

“It was great,” James says about sharing the missionary work with the Catholic community of St. Michael’s. “It was a way to make it a universal experience for the Church at large. That was a great little gift there.”

Adriana felt the power of faith moving through a paralyzed woman named Deanna she spoke with via a special computer program during a fix-up day.

“I was amazed at how patient she was about things because she couldn’t do anything really,” says Adriana. “She had such a joyful spirit. I was encountering a lady who was very close to God, you could just tell.”

It was eye-opening to see the importance of family and home, even for those who live in places most would consider unlivable. After helping one family who lived in an old crack house, James says, “It just struck me that there are people in situations, that unless they get outside help, they just can’t change it. They need miracles, and so often these miracles don’t happen.”

Both James and Adriana are taking their faith experiences from CUP into daily life. They know God wants them to live lives of prayer while caring for all those they meet. Before CUP, this seemed like an impossible challenge, but now that they know how to make a difference, the challenge is not as intimidating.

“Being a saint is hard,” James says “but it might not be as hard as I make it out to be.”

In 2006, Father Robert Roggenbuck noticed devastation growing in urban areas of the Diocese of Lansing. Urban blight was increasing at the same time the presence of the Catholic Church was declining. Father Bob believed young adults could provide missionary work to care for the poor living in these areas, and began Catholic Urban Project in 2009. The first group of missionaries came to Ypsilanti in 2010 to work out of St. John the Baptist Parish.

CUP has been blessed with college-age volunteers from all over the United States in its three years of service. As with many missionary organizations, CUP participants must raise $1,000 to defray the cost of their expenses during the eight-week program. Missionaries are supported through the whole experience by year-round staff, including new CUP Director Suzanne Abdallah and Karmen Saran, director of special projects for St John’s. The program operates with generous donations from those wanting to help with urban ministry.

Donations to support CUP can be made to Catholic Urban Project, 411 Florence St., Ypsilanti, MI 48197. For more information on CUP’s mission, visit catholicurbanproject.org or call 734.483.3360 extension 108.