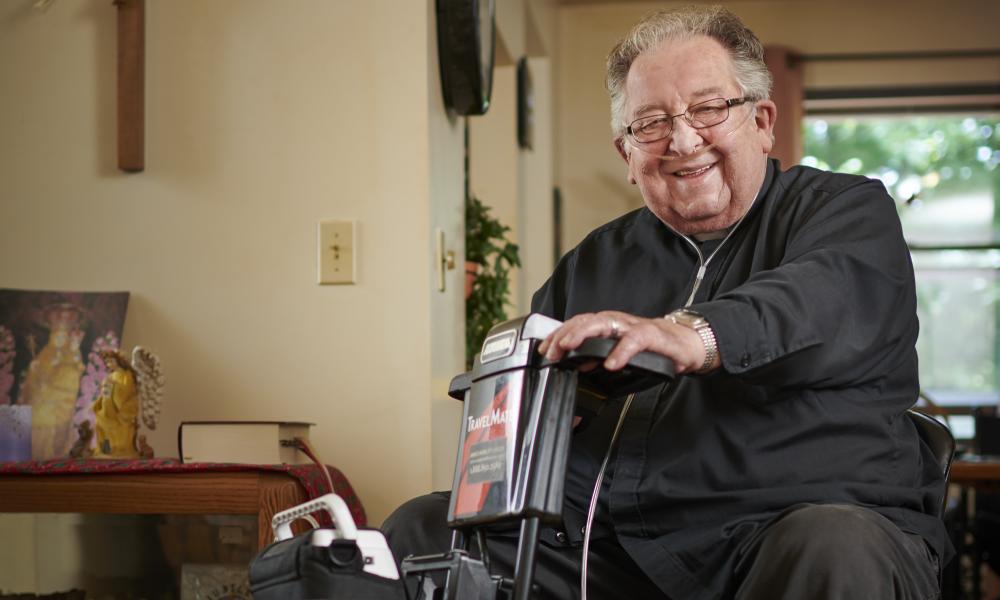 Father Ray - still serving as one of our senior priests

With a huge grin and hearty laugh, Father Raymond Urbanek quickly describes his status as a senior priest: “It’s wonderful! I can celebrate Mass and then go home. I don’t have to worry about finances, signing people up for committees or listening to complaints. The hard part for me now is preparing my homilies. Between my illness and age, my concentration isn’t what it used to be.” With a twinkle in his eye, he adds, “My homilies have gotten shorter, which probably makes people happy.”

Seventy-eight years young, Father Ray suffers from COPD (chronic obstructive pulmonary disease) and emphysema. His oxygen tank is his constant companion and yet, he keeps a full schedule. He says, “The first miracle of the day is I can get over to church. I say Mass every Thursday morning, Saturday evening and Sunday morning. Someone helps me into the sanctuary, where I sit on a stool through the whole Mass; our deacon, John Marsh, assists me. On Saturdays, I also hear confessions.”

Father Ray belongs to the parish senior group and enjoys potlucks with them once a month. Great Lakes Hospice assists him with health care needs several times a week, while parishioners frequently drop in for visits. One couple has adopted him: “Their last name is Angell and they are angels to me. They take me out to eat, help me run errands, go to events in Lansing – and once a week they come change my linens.” Father Ray reflects on the constraints his medical condition places on him, “Sometimes I get down because I can’t give more, but I am just not capable of it.”

Recalling his full-time ministry, he says, “My favorite part of being a priest was when I’d get called in the middle of the night to go to the hospital or a home to anoint someone. That is when I felt most alive. I never grumbled. I truly enjoyed doing it. Now, I can’t drive anymore, I need to take my oxygen tank, so it’s not possible.” Father Ray also misses going to the nursing homes to say Mass, anoint or simply take Communion. Ever an optimist, he chooses to see the positive. “I am happy, though, because I have plenty to keep me going,” he says. I’m proud that, even with my medical condition, I can still celebrate Mass and get around.”

Father Ray has been getting around as a priest for some time. Entering a Benedictine monastery after high school graduation, he was ordained a priest for the order in 1968. “I always had a feeling I was meant to be a priest. Other careers crossed my mind, but entering the monastery and being ordained was always the most prominent. I have enjoyed being a priest for 50 years, and I’d do it all over again,” he says.

For 20 years, Father Ray served as a monk with the Benedictines, only able to preside at Mass on the weekends when he was sent to a parish. “I wanted greater contact with the people and opportunities to use my vocation more often, so I transferred to the Diocese of Lansing. I was a sacramental minister in Montrose before going to St. John the Evangelist in Fenton. After three years, I became the pastor of St. Mary in Mt. Morris. Eight years later, I was appointed pastor of Holy Family in Ovid. I liked moving around to different parishes. The only negative part,” he chuckles, “was moving all my stuff!”

Over those ministerial years, Father Ray learned how important it was to not be hypocritical. “You can’t tell the people one thing and then do another,” he says. He also found value in structuring his homilies to dispense realistic examples. “I always gave them something practical to do to carry the message into their lives. I feel I have been good at explaining our faith, why we do things the way we do and how to live it.”

Living amongst the parishioners has brought Father Ray, a humble man, to understand that people are basically good. He says: “We hear all this junk on TV about what’s going on and it clouds our opinion. I think people mean well toward others. Everybody is struggling to make a living, be faithful to one another and to the Lord. There is more good going on in the world than we realize.”

Father Ray encourages people to remember other senior priests. “Visit them once in awhile with a card or a call and maybe take them some food. And on the holidays, don’t forget they are around. I really appreciate it when people do these things for me.”

THE OFFICE FOR PRIESTLY LIFE AND MINISTRY is made possible by your generous support of the DSA.