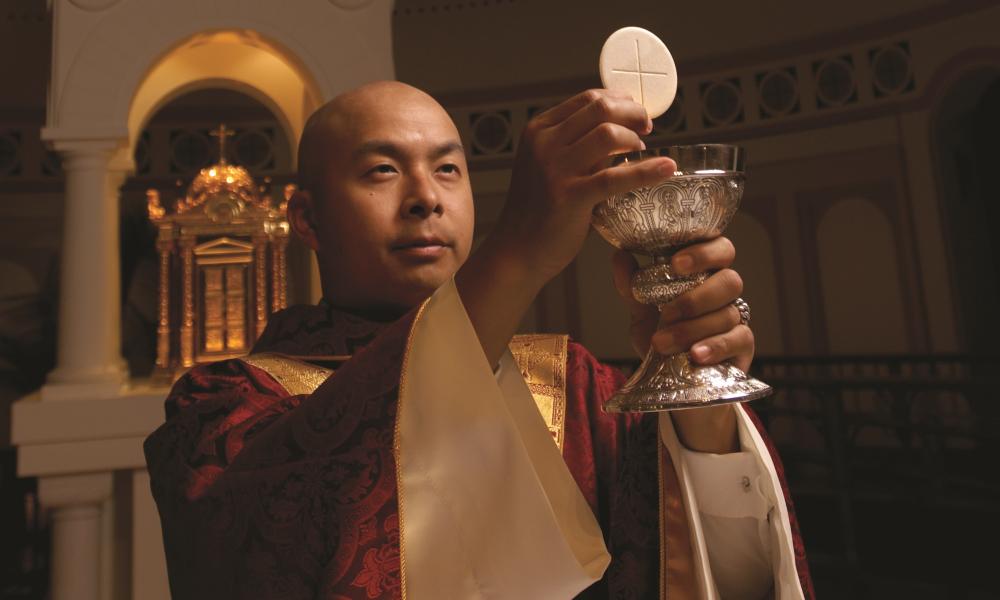 It is right to give God thanks and praise: The Eucharistic Prayer

The eucharistic prayer is the center and summit of our entire celebration (GIRM 78). Like many of our traditions, it has its origin in Jewish practices. The leader of the meal would have offered a blessing (barekah) over the bread that praised God, acknowledging his past and present deeds. Over the wine, he’d offer a three-part prayer that would include praise for creation, thanksgiving for salvation history, and petition that God’s saving acts would continue.

Though scholars debate whether or not the Last Supper was a Passover meal, Jesus, too, offered such prayers to his Father. He added an important dimension when he said “…this is my body” and “This is my blood.” Further, he commanded his disciples to “Do this in memory of me.”

The early Christian communities continued to gather in table fellowship and to use traditional prayer forms as they broke bread in memory of the Lord. Most of these prayers were extemporaneous until about the fourth century when texts became fixed in various regions. In the West, they used the term canon (Latin for “rule” or “law”) and in the East, they used the term anaphora (Greek for “lifting up” or “offering”).

By the fourth century, the prayers that made up the Roman Canon became fixed. The canon was formalized by Gregory the Great (590-604). It was sung or recited out loud until the ninth century, when it began to be prayed in a low voice. Vatican II restored the practice of the presider saying the prayer out loud so that the assembly might pray as he leads it.

No matter which one is chosen for Mass, each eucharistic prayer has these eight elements (GIRM 79):

• Thanksgiving – throughout the prayer, but especially in the Preface, naming what God has done

• Institution Narrative/Consecration – the Scriptural account of Jesus’ institution of the Eucharist; the words the priest uses to consecrate the bread and wine into the Body and Blood of Christ

• Anamnesis – This is not a mere recollection, but a remembering that makes an historic event present here and now

• Offering – we offer Christ’s sacrifice with him to the Father, in the Holy Spirit

• Intercessions – we pray for the living and the dead, in communion with all the saints

• Final Doxology – concluding words of praise offered through, with, and in Christ (per ipsum) to which we add “Amen.”

Soon, you’ll notice significant changes to the translations of our eucharistic prayers. But the structure of the prayers will remain the same. You will still recognize the eight elements listed above. Listen carefully for some new words.

You will hear the word “chalice” instead of “cup.” This links the narrative closer to the ceremonial vessel we use today and to the original Latin word.

The priest will simply say “The mystery of faith.” “Let us proclaim the…” has been omitted since it seemed out of place to suddenly address the assembly in the middle of a prayer directed to the Father.

One of our responses – “Christ has died. Christ is risen. Christ will come again.” – will no longer be used. These three declarative sentences are good strong statements about Christ; but they do not match the other responses, which are prayers directed to Christ. In addition, the other responses acknowledge our sharing in Christ’s sacrifice and its fulfillment.

In the words of consecration over the precious blood, you’ll note several changes. The word “everlasting” is replaced by “eternal.” The former refers to something that lasts a long time; the latter describes something for which no measurement of time is possible. There will be a new translation of pro multis. Where we used to hear “for you and for all so that sins may be forgiven” we will now hear

“…poured out for you and for the many for the forgiveness of sins.” Jesus did indeed die to forgive sin and he sacrificed his life so that all may have salvation. Some will freely choose to reject this great gift, so the Holy Father chose the words “for the many.”

As we join in this great prayer of thanksgiving and sanctification, let us be aware that we are offering a sacrifice of praise for all that God has done for us and that we are, once again and still, joining in the great sacrifice of Christ.