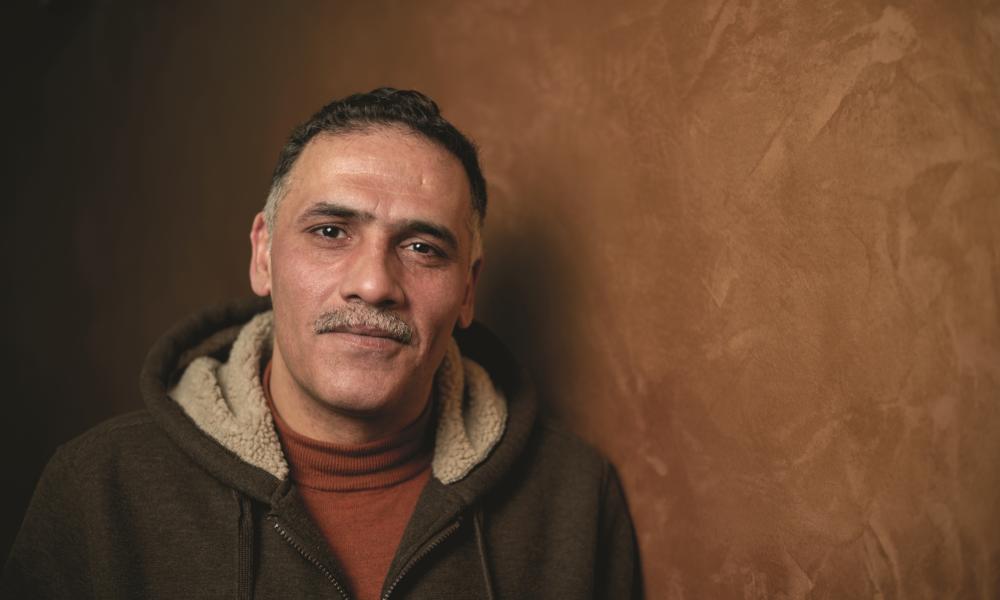 Ahmad and Manal Daboul are peaceful people. Grateful to be safe in the U.S., they shake their heads at the tragic circumstances that sent their beloved Syria into its current chaos and destruction.

“To talk about my city, Damascus,” Manal says through interpreter Aya Turki, “we were living in peace. Friends and neighbors always in peace. Shia or Suni never made any difference. Our faith is a peaceful religion, but people of all faiths lived side by side.”

“We are a peaceful people,” Ahmad agrees. “I don’t deny there are good people and bad people, but Islam teaches that if you kill anyone, it is like you have killed all humanity. That is what the Prophet says.

“One day in Dar’aa, a small town 70 miles south of Damascus, kids from school started a protest like the Arab Spring they had seen in Tunisia.

“The Army took the kids and tortured them. When their families protested to get their children back, everything just exploded. After that, the Free Army started and other countries stepped in.” Ahmad shakes his head.

Manal continues, “We had a home in Damascus very near my parents’ house. My brothers and sisters lived there with them, so we were all very close.

“One day in the early summer of 2012, we woke up and could hear bombs going off in the downtown. I was about three months pregnant, and we gathered our children to wait it out. They were young – 8, 7 and 2 years old.”

“It was the worst day of my life,” Ahmad says, shaking his head. “We had only been there about 10 minutes when suddenly our whole area was covered in black smoke. I looked out of the room, and saw that our kitchen was just gone. A missile tore through the opposite corner of our house from where we were huddled. It wiped away our kitchen and went on to our neighbor’s houses. In seconds, everything was changed.”

Manal continues, “It blew out all the doors and windows of our house. We had been spared from flying debris, but the shock and terror stole my voice. As I stood looking at the space where my kitchen had been, I felt my left arm growing heavy and I collapsed. I was having a stroke.

“Somehow, they got me to the hospital, where I stayed for 18 days. During my stay, I lost the baby and my ability to walk.

“My family took our children and moved about 10 miles south of Damascus to Sahnaya. While I was in the hospital, my family went back to our home to see if anything was left. They brought nothing back.”

Ahmad picks up the story. “My parents had died long before the fighting, but four of my brothers and three sisters lived in Jordan. Two of my brothers rented a three-bedroom house for their families and told us to come live with them. There was nothing left for us in Syria, so we agreed.

“When they released her, the hospital gave Manal a report saying she needed medical assistance. We took this with us as we traveled by bus to the Jordanian border. After waiting about seven hours, the Syrian government gave us permission to leave. We took a taxi across the border and waited four hours for permission to enter Jordan." Finally, they were let in.

“We moved into the house with my brothers and their families. Twenty-seven of us in three bedrooms!” Ahmad laughs.

Manal interjects, “It was all love! We supported each other.”

“For three and a half years, we lived there. I worked as a welder. Manal stayed at home with our children and got stronger.

“We arrived in America last summer with the help of St. Vincent Catholic Charities’ Refugee Services. They helped us rent a townhouse for our family and enroll the children in nearby schools. Our oldest daughter, Raghad, is 12. Ranim, our second daughter, is 11. And our son, Yasser, is 7. He does especially well in English.”

Manal smiles ruefully, “Sometimes he even corrects his mother and helps his father with English!” Her expression reveals a mixture of pride blushed with exasperation. “I studied English through my schooling, but when we first came, it was hard to understand. I am taking classes at Lansing Community College, and now I’m better.”

“I am planning to go to LCC for English, too,” Ahmad adds. “And American customers at my work help me with pronunciations. Refugee Services helped me get a job at the Halal Market, and now I’m famous there!” He laughs. “Christian or Muslim, all the people I’ve met are wonderful.”

“Refugee Services also helped me get therapy to recover from my stroke,” Manal adds, “and now I can walk with a brace and a cane! My therapists treat me like family. They give me courage to push myself. When I do it, they are so happy! Like family they celebrate with me. They are wonderful people who have helped me make great progress.”

“We are grateful to be safe here,” Ahmad smiles, “but we also miss our family and life in Syria.”

“For me, all my heart, I want the war to end,” Ahmad concludes. “We hope someday Syria will be as it was in the days before the revolution. I sometimes think about what might have been if both sides apologized at the start. Now destruction is all that’s left.”

Thanks to St. Vincent Catholic Charities, the Daboul family can watch in safety as they pray for peace and healing in their homeland.