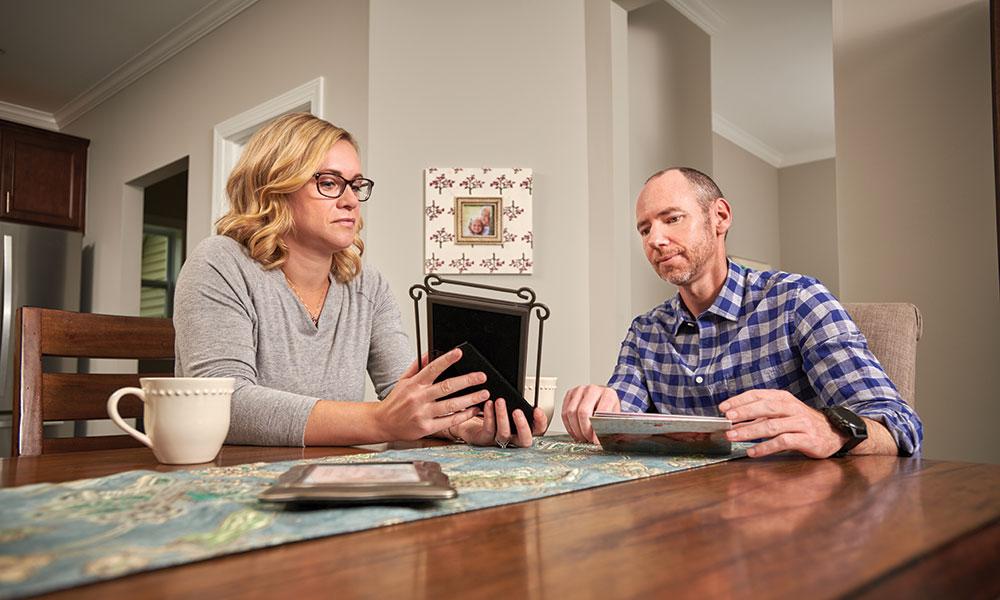 ‘I Was Afraid Riley’s Name Would Be Forgotten’

Katie Rohrhoff remembers Nov. 3, 2009. “I had been on bedrest the last five weeks of my pregnancy with identical twin girls. At 30 weeks, I had my regular appointment with our fetal-maternal specialist at the hospital. When the doctor did the ultrasound, we could see there was something very wrong with the babies’ heartbeats. He told us we needed an emergency caesarean to give them a chance to develop outside the womb.

“I was a pediatric nurse at Children’s Hospital, so I saw lots of preemies who developed normally in the NICU (neonatal intensive care unit). We had wanted to get them closer to their January due date, but I saw the ultrasound and understood my doctor’s sense of urgency. They took me straight to the operating room and administered general anesthesia.”

John nods, “It was terrifying. And on top of the babies’ health, it was the middle of the H1N1 virus scare, so hospitals were kind of on lockdown. Nothing was like we had planned.

“Riley came first, then Payton followed a minute later. Both babies weighed under three pounds, but only Payton was alive.”

“They took her immediately to the NICU and put her on a respirator and eventually a feeding tube,” Katie recounts. “At 30 weeks [gestation] she couldn’t breathe or eat on her own. I remember how fragile she felt when I rested my hand on her tiny back.

“We couldn’t hold Payton, but the hospital staff let us hold Riley’s little body. They allowed our parents to come support us and gave us space to grieve. Once our family was together, we named our babies Riley Katheryn and Payton Grace.

“My dad is a deacon in the Diocese of Grand Rapids, and he was able to baptize Riley there in the hospital. He had seen death before, but Riley’s death affected him deeply. It’s hard to see your parents so sad for you” Katie’s voice trails off. “It kind of makes you sad for them on top of your own sorrow.”

“The next day, we called the funeral home our nurses recommended.” John says. “The funeral director, Tim Lynch, explained our options and took us under his wing. He made such an impact!

“With Tim’s help, we chose a burial for Riley at a cemetery near our house. A few days later, she was buried in a section dedicated just for babies. Our parish priest back then, Father George, of St. James [Novi] did the graveside service.

“Our parents helped with things like returning the second crib and some of Riley’s clothes. With H1N1, they weren’t even allowed in the hospital to see Payton until Thanksgiving. No one could hold her, but they supported us every way they could.”

“At the beginning I was super focused on getting Payton healthy. Having your first child, your instinct kicks in and that baby becomes your primary focus.” Katie pauses, “But there was always a tension.”

John agrees, “When one is alive and one is dead, you struggle. Where do you go emotionally? When you are happy for the live child, you feel guilty for the dead child. And then you feel bad for not focusing on your living baby. I should say babies. Our daughter, Morgan, was born 18 months after Payton and Riley.

“I am a big believer that every day we have choices to make on how we will impact people’s lives. A few years after our twins were born, I was thinking about how Riley never had a chance to make her own impact. Then I realized we could start a foundation in her name to help other families who’ve lost a child.

“On Valentine’s Day 2015, I told Katie I was thinking about starting this. She is one of those people who, when she commits to something, she starts it right away. By the end of the week, she had the Facebook page up. Through my work as a financial adviser and former accountant, I know the legal process for starting companies and nonprofits, so I got that process going.”

“I was afraid Riley’s name would be forgotten,” Katie says simply. “Payton and Morgan were growing. We had moved to a new community. We visit Riley’s grave throughout the year — especially on her birthday. Our new parish, St. Mary Magdalen in Brighton, was so supportive. But I worried.

“Now Riley’s name is on everything for the foundation — website, pencils, letterhead, Facebook page. It has been helpful for my emotional well-being to be able to help other families in her name.

“The Riley Katheryn Foundation provides support for Michigan families after the death of a child 1 year or younger. We try to take away the burden of funeral costs for those who can’t afford them. We also provide emotional support, so parents and families know they’re not alone and that there is hope.

“So far we’ve helped over 230 families cover more than $100,000 in funeral expenses. We do fundraisers and invite people to contribute. Many of our families have raised money for the foundation in the name of their deceased baby. Some, like my grandfather, asked that memorial contributions in their name go to the Riley Katheryn Foundation.

“I was angry in the beginning at God for letting this loss happen to us. But now, looking back, I know Riley was never mine to keep. God needed us to help others going through similar tragedies. And we would have never been able to do that without losing our baby.”

John agrees, “Good things can come from bad situations. If you take the time to really examine it, there’s generally a way to make some positive impact. We’re so grateful Riley has done that.”

Learn about the Riley Katheryn Foundation, grief support resources and more at RILEYKATHERYNFOUNDATION.ORG/