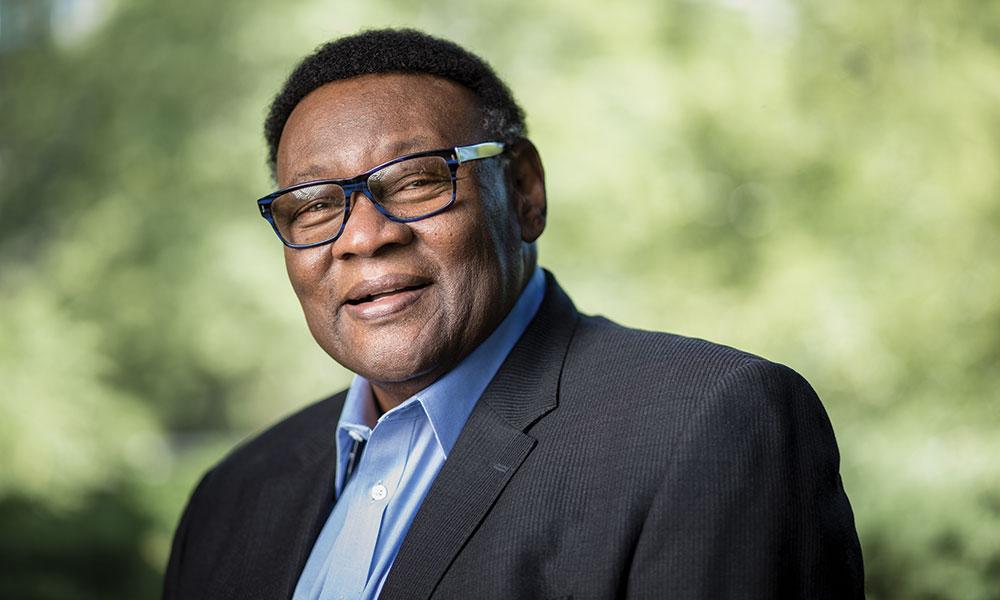 My dad was the best person I’ve ever met,” Isaiah “Ike” McKinnon says simply. “He grew up in Alabama, the son of farmers and grandson of enslaved people. He played in the Negro League before starting his family, catching for Booker T. Brunion and earning the respect of Satchel Paige. He had to move north when Ku Klux Klansmen tried to kill him for speaking up for Black workers’ rights to organize a union.

“He left school in the second grade, and lacked confidence reading and writing his whole life. But oh, did he tell stories! I guess I got that from him, along with his work ethic and his ability to forgive. Dad was the standard-bearer for who I am.

“Another man shaped my life in a different way. A Detroit police officer, Rotation Slim, was one of the ‘Big Four’  – a scout car of White cops who terrorized my neighborhood in the 1950s. I had just started at Cass Technical High School, and had gotten a ride home from a neighbor, when a police cruiser pulled us over. Rotation Slim and his partner jumped out. He was a tall, gangly man with dark hair and a reputation for assaulting and even killing a few Black people, and there was never any recourse for his victims.

“The cops pulled us out of my friend’s vehicle, and Rotation Slim slammed me against the car, beating my chest, my stomach – anywhere it wouldn’t show. I was crying and looked around for help from the neighbors who came out of their homes, but there was nothing they could do – even for a 14-year-old kid. This was everyday life in our neighborhood.

“When Slim and his partner finally had enough, they told me to get the hell out of there. I ran 10 blocks to my house. For years, I never told anyone, afraid of putting my family in greater danger, but that night I made a vow. I would one day join the Detroit Police Department (DPD) and do everything in my power to make sure nothing like this ever happened to anyone else again. I was going to make a difference in people’s lives.

“Eventually, I graduated from Cass Tech, did a stint in Vietnam with the U.S. Air Force, returned to Detroit and made a career in the Detroit Police Department. While there, I returned to school to earn bachelor’s degrees in history and law enforcement, a master’s in criminal justice and a Ph.D in higher education administration. While studying for my master’s, I also completed special training at the FBI Academy in Quantico, Va. I have so many stories, I literally filled three books! I tell the Rotation Slim story early in my memoir, Stand Tall, and I have talked openly about it many times since.

“When I joined the DPD in 1965, I was one of very few Black officers on board. I have seen and directed many significant changes in the department’s culture and expectations. As a rookie, I narrowly escaped being shot driving home from work when two White officers pulled me over during the 1967 riot. I was wearing my uniform, but one cop pointed his gun at me and said ‘You’re gonna die, N___r.’ He fired three shots as I peeled out. There were times I stopped other cops from inflicting the kind of behavior Rotation Slim unleashed on me. Sometimes it got me reprimanded for ‘trying to ruin the lives of those good officers,’ but ultimately I was able to make the kinds of changes my 14-year-old self would have wanted.

“By the time I retired in 1998 after 24 years in the ranks and four-and-a-half years as chief of police, the DPD was fully integrated. We had an advancement system based on performance, and a higher education requirement for managers. We had rooted out much of the corruption and waste – though, unfortunately, not all of it. I did my best to live up to my vow to serve and protect. My only regret is that my dad passed away in 1982 – 12 years before I became chief.

“Dad was a man of deep faith. He blessed every meal, prayed openly about life and sang hymns every day. He was a deacon at the Weeping Willow Baptist Church, and engaged me in reading the Bible and discussing passages with him when I was young. Despite many things he had been through, he never espoused racism or hatred of any kind. Of the many lessons he taught me, one has served me particularly well. ‘Son,’ he would say, ‘let me tell you something. There’s good people and bad people of every race. You can’t hold that in your heart.’

“This message surged when, as a rookie cop, my partner and I stopped for lunch and he pointed to an old man in a nearby booth. ‘Wow! That’s Rotation Slim,’ he said admiringly. ‘He’s a legend in the department.’ I stormed toward the booth ready to avenge the battered 14-year-old me.

“Towering over him, I said his name. ‘Yes, Officer?’ he replied, looking up at me as the coffee cup rattled in his trembling hand. I looked down at a shrinking, shaking, pitiful man who had beaten people just for kicks and got away with it as long as he had his gun at his side. This man who had called me every filthy name as a child just called me ‘Officer.’

“Suddenly, I felt my rage ebb away. I said, ‘A number of years ago you did something to me that changed my life.’ His eyes were wide, and his hand shook so much that coffee spilled onto the table. ‘Tell me, what did I do?’ his voice cracked. Just seeing him shaking as I stood over him gave me, and my 14-year-old self, what I needed to release him from my heart.

“As these emotions flowed over me, I told him, ‘You won’t remember what you did. You won’t remember it at all.’ Thinking of my father’s words and example, I continued. ‘But you know what? I want to thank you for it.’ I smiled, then turned and walked away.

“In spite of everything I’ve been through, and everything my parents experienced before me, I have never lost my faith in God and people. I’ve always thought there is such a small percentage of people who are dishonest and corrupt. That goes for people in law enforcement as well. Though I dealt with a lot of that small percentage in my years in the Detroit Police Department, I still believe we are a society of decent and honorable people.

“After my dad died, I converted to Catholicism so I could participate fully in Mass with my wife and two sons. I recently retired from a second career as associate professor of education at the University of Detroit Mercy, where I’ve been able to work with students and help them build their lives on a strong foundation of education and faith.

“I’ve made it my personal goal to talk with young people, provide a positive role model and try to counteract any negative feelings and thoughts life experience has given them.

As my father and other mentors taught me, the great mystery of faith and the power of believing is so important. I hope I have honored their legacy and made my 14-year-old-self proud.”