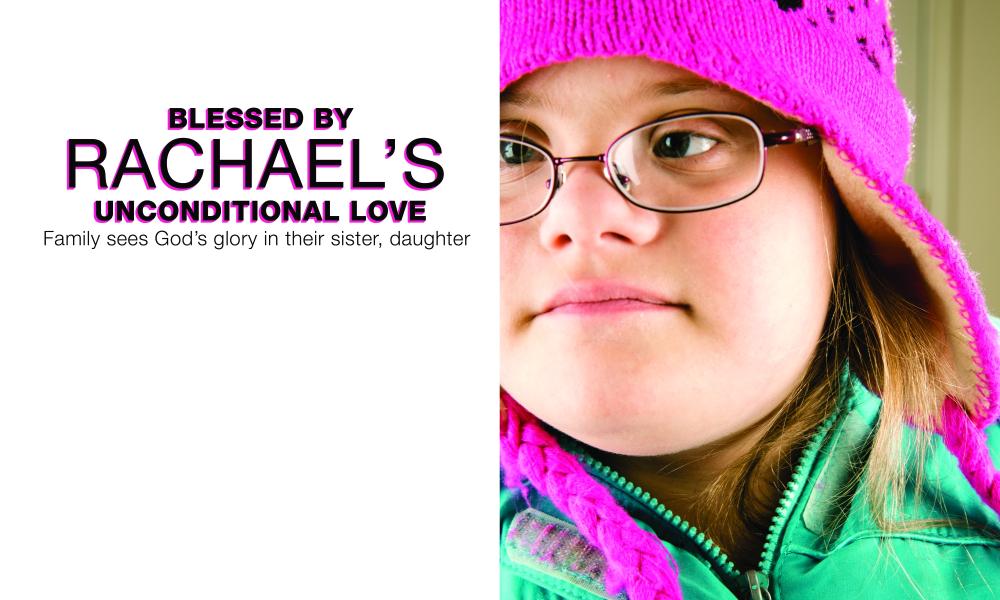 I look at Rachael and see Jesus

Rachael Lawrence wanted ice cream. She had eaten dinner. Combed her hair. Washed her face. She was anxious for dessert, flashing a contagious smile at her mother, Janet, and sisters, Anne, Cecilia and Mary. They couldn’t resist the 9-year-old on this warm summer evening.

Truth is, they can almost never say no to Rachael because her requests come from a place of innocent joy. Born with Down syndrome, Rachael doesn’t know anger or hostility. She may grow frustrated from time to time, but she is an exuberant child, offering love to anyone she comes into contact with – family, friends, even strangers.

“When my kids come home from college, they don’t want to see me, they want to see Rachael,” Janet remarks. “She has this tremendous gift to bring love into your life.

Tere was a real strong power that flowed through my heart and the Lord said, ‘I promise you that you will see my glory in Rachael’s life. And the second thing is, I’m not going to heal Rachael because she is not the one who is handicapped. The person who is handicapped is you because you’re judging her.’”

There is a genuine acceptance she has of anybody. They could be grumpy or crabby and withdrawn, and that doesn’t faze her. She just greets people with a smile. It can be random people, at a grocery store, and she’ll lean in and give you a hug.

Most profoundly, she touches the Lawrences, who are parishioners at St. Patrick in Brighton, where Dave is a deacon.

Janet was 47 and her husband, Dave, 51 when Rachael was born in July 2005. They already had seven children, but as Dave studied to become a deacon, the two of them heard God’s call to welcome an eighth child into their brood.

However, complications arose. Janet started hemorrhaging eight weeks before her due date, collapsing at the family’s Mattawan, Mich., home as blood pooled around her, creating a scene out of a horror movie. Janet’s sister, also pregnant, just so happened to be dropping her kids off at that time and found Janet. Dave, meanwhile, had taken some of their children to Mass to lessen the burden on Janet.

“Praying on the way to the hospital, I didn’t even get through a Hail Mary; I thought I was losing the baby, but twice during the ambulance ride Rachael kicked me to let me know she was OK in there,” Janet says. “The doctor told me later on that had it been another five minutes, he would have lost us both.”

Dave had arrived at the hospital by then and was the first to talk to the doctor. He had the type of news to share that is often preceded by, “You better sit down for this.” Rachael had Down syndrome. While two of the other Lawrence children have autism, they are both high functioning. Rachael’s condition would have far greater consequences for the family.

“Here we are later in our lives, and this idea that this child will be a burden on the family, and what will happen when we die – who will take care of her?” Janet admits. “You’ll be saddled with this responsibility your entire life, and just those thoughts were totally unexpected because we’re a strong Catholic family.

“They were shocking. ‘Where is this coming from?’ It was a real attack of faith and doubt in God’s providence.”

Anne, 15, offered comfort to her parents.

“Our mom and dad gathered us into the living room, and it was clear they were very upset, but when they told the rest of us, we were like, ‘OK, whatever. We’re still going to love her,’” Anne explains. “Maybe we didn’t understand the gravity of it, but it didn’t matter to us that she had Down syndrome. She was our sister.”

Dave’s faith was, perhaps, most severely tested. Some days, going through the motions of his daily prayer time with God, Dave prepared to barter with the Lord to heal his daughter.

“I remember putting my hand over Rachael in her neonatal intensive care unit crib and I pleaded with God to heal her. I felt this real oppressive spiritual attack from the devil, ‘You trusted God and look what he gave you. He gave you damaged goods,’” Dave shares. “’You’ll never accomplish what you wanted to accomplish. You’ll never be free. You’ll be stuck.’

“Here I am training to be a deacon so I’m putting on this happy face, and yet inside I was so angry. It was really hard to fight those feelings,” he says.

“It was probably six or seven weeks after Rachael was born and I was sitting quietly in prayer. I wasn’t hit by lightning, but there was a real strong power that flowed through my heart and the Lord said, ‘I promise you that you will see my glory in Rachael’s life. And the second thing is, I’m not going to heal Rachael because she is not the one who is handicapped. The person who is handicapped is you because you’re judging her.’ And then the floodgates opened.

“It was amazing. God was spot on. I was the one who needed healing. And with that acceptance, I was free to really embrace and love Rachael with all my heart,” Dave says.

Every day, his love for Rachael has grown. And every day, Rachael returns that love in kind to her parents, her brothers and sisters, and those with whom she comes into contact.

“There are moments when I am looking at Rachael and I see Jesus,” says Anne. “I just feel like God is looking at me through her.”

One by one, the Lawrence siblings believe Rachael has been a catalyst to live a better life, one more devoted to their faith and to God. Members of this large Dexter family are reminded, every time Rachael pours into them with a hug and a smile, just how blessed they are.

“Rachael is probably a lot closer to what heaven is like because she just freely gives love with no conditions,” Mary says. “It’s like that is why God made her – for the rest of us to see what it means to love like he does.”

Your parish community cares: When you are facing unexpected struggles, contact your parish for pastoral care and support.