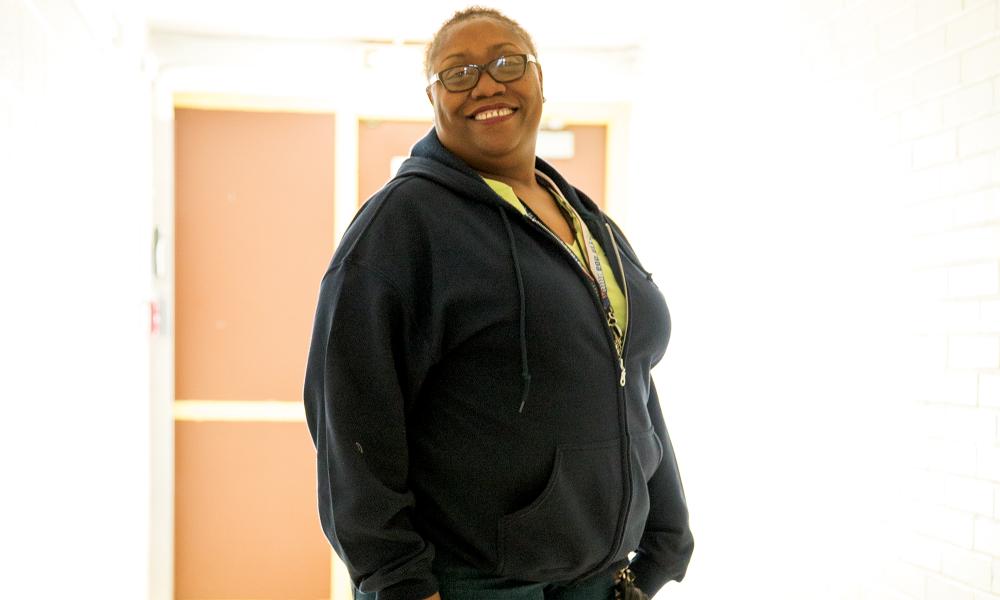 I learned I could stand on my own

Cara Manns has a memory from when she was five years old. She is sitting in the back seat of a car with her mother and Big Jimmy in front. From between the bucket seats, she sees the man slip something into her mama’s drink. Then the memory skips ahead to an ambulance taking her mother away, never to come home again. She can still remember the dress she wore to her mother’s funeral, but she never remembers hearing anything about Big Jimmy being held accountable for her mother’s death. She was just gone.

“I always felt like my mother gave me away,” Cara says. “But of course she didn’t really. She died and my grandmother raised me and my three sisters. Four girls, Grandma and my aunt all lived in a three-bedroom apartment in the projects on Carpenter Road. Grandma got really involved at Carpenter Road Elementary School where we were all enrolled. She attended schooling and parenting classes to get us off to a good start. Eventually we didn’t miss our mom.

“After elementary school I went on through junior high and into high school. My junior year, Grandma got sick. She was partially paralyzed on her right side, so she couldn’t do as much for herself any more. I figured, ‘Well, she took care of me. I guess it’s my time to help her,’ so I dropped out of school and became her caregiver. I got a job in the customer service department of the Flint Journal so I could take care of Grandma and earn some money for our household. When she died, I grew really depressed. She was the only mother I had really ever known.

“When I was 18 I became a mother to my daughter, Cristle. Her dad and I lived together, but he was abusive and controlling. Often he would lock me inside the house to keep Cristle and me in.  I used to love to see him leave for work and I hated to see him come home. When he did, I would sit and watch him drink and fuss and complain. I’d drink with him until he’d pass out so I could feel calm.

“I used to pray that he would find another woman so I could be free. One day the abuse got so bad I couldn’t stand it anymore. After he left for work, I lifted Cristle out the window that he hadn’t locked. I lowered her to the ground then climbed out myself and took her to a safe house. I never looked back, though I became friends with the woman he eventually married. She helped me raise Cristle.

“After we escaped, I found work at a cleaning service where I stayed for four years. I made friends with a nice, calm man there named David. We had fun together and with our other coworkers, and eventually we fell in love. After about three years, we had Myeeah together, and David helped raise both my girls. Cristle still calls him Daddy.

“Eventually I had to go on disability for my heart, and we were having a hard time making ends meet. The girls needed clothes, so I decided to visit St. Luke’s N.E.W. Life Center. I remember Sister Judy told me they would be giving away food for Thanksgiving if I was interested. So I went back to get some food, but by the time I got there, it was all gone. Sister must have seen something in my eyes, because she reached into her pocket and pulled out a $20 bill. I remember she told me, ‘Go buy your kids some milk.’ That helped get us through.

“A short time later I signed up for their Women’s Group. One day each week for three years, I attended classes while my girls were in school. I learned about all kinds of things to make me successful in life, from parenting to communication and budgeting to goal-setting. It helped build my self-esteem and set my sights on bigger goals.

“The only housing we could afford was in a rough neighborhood where thefts and stuff were going on all the time. The police found some stolen items in my grill outdoors so they searched my apartment to make sure we hadn’t stolen anything. I didn’t want to raise my girls there, so I talked with Sister Carol. She paid the first month’s rent for an apartment in a safer part of town. In exchange, I agreed to come work on little jobs at the N.E.W. Life Center.

“Sometimes after I’d finish my work I just hung around even after it was time to close. The sisters would say, ‘We’re fixin’ to go now,’ but I didn’t want to leave. Pretty soon I started to answer the phones at the main desk and I started taking classes to earn my GED.

“Some of those classes were hard, but the sisters tell us ‘Can’t’ is nothing. We don’t know the word here. And they’re right! Barb White taught me math. Boy, she’s a good woman. I couldn’t believe I actually had fun learning it! And the sisters stayed on my back like mothers about getting that diploma. This is the best thing that could ever have happened to me.

“Gosh the things the sisters have done for me! They taught me to sew and quilt, how to accept compliments and how to give to people. I didn’t think I could make anything someone would pay for, but I sell blankets, quilts and fitted sheets at Octoberfest every year. When I was able to give another woman one of the blankets I made, Ha! It felt so good! I had always received before, but now I get to help someone else.

“I’ll never be in the system again. The sisters taught me to be self-sufficient, and once I learned I could stand on my own, I got off disability and came to work at the N.E.W. Life Center. Before I got my GED, I saw myself as the woman who answers the phones. Once I earned my GED, I gave myself permission to say, ‘Yep.  I’m the Receptionist now!’ And when someone calls and says ‘I want to speak to KK,’ it makes me feel so good!

“If I hadn’t come here, I probably would have been drinking and drugging and stuff. Maybe selling a little drugs to keep a roof over my head. Now I’m able to know that I want a future. I want to go to college, take up a few classes so I can help other people the way the sisters have helped me. I don’t think I ever want to leave this place. If I could be a nun, I guess I would!

“Do I have faith in Flint?” There’s a note of surprise in Cara Manns’ voice. “Do I have faith in Flint? Oh my! Yes. Yes, I do because I’ve learned that people put up walls not to keep others out, but to see who cares enough to tear them down. There are lots of problems – schools closing, crime all over, but everyone’s not bad. There are good people out there who can help if you let them. That’s another lesson I learned at St. Luke’s.”

The St. Luke N.E.W. Life Center in Flint is a faith-based environment providing life skills and workplace training which empower people to become self-sufficient. Tutors help people study for their GED, employment classes and mentors help prepare people to look for a job and the food pantry distributes groceries and offers hot meals.

For more information on the N.E.W. Life Center or volunteer opportunities, visit www.stlukenewlifectr.com