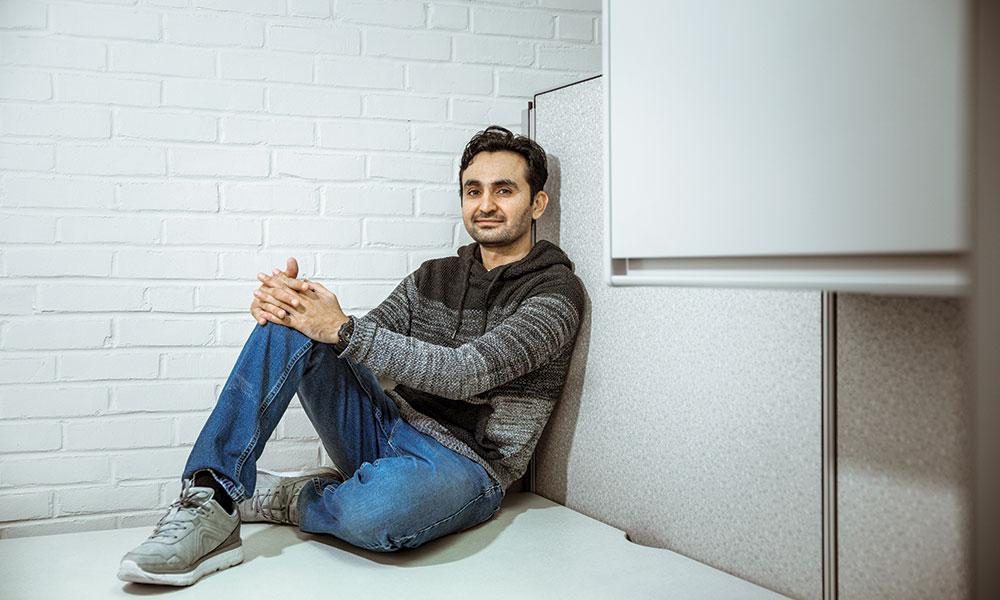 ‘I Get to Come Home to My Family Every Night’

Resettled From Afghanistan, Jabar Is Grateful for His New Life

Abdul-Jabar Hemat is helping Afghans here in America through St. Vincent Refugee Services. Not long ago, he was helping Americans in Afghanistan through the U.S. military.

“I was sitting by the side of the road, waiting for my Marines. They were out on patrol in a town we had just liberated in Helmand Province. The Taliban knew we were coming. So they planted IEDs (improvised explosive devices) along the routes they thought we would walk.

“We had lost soldiers and one of my fellow interpreters to an IED months earlier. But going out every day to live fire and IEDs, you get kind of numb to them. While I waited, I reached down for a loose wire I saw at my feet.

“I don’t know what I was thinking about. Maybe I was remembering the time my squad came under attack. I thought I was finished. We were on a night patrol when 12 of us were surprised by about 30 Taliban fighters. IEDs were exploding all around. I felt a bullet rush between my legs. Suddenly, about 50 more Marines appeared out of nowhere and pushed back the Taliban so we could make it back safely to our base.

“Or I could have been thinking about my wife and two daughters. Sometimes, I just daydreamed about coming home to them at the end of the day. I had left them in Jalalabad almost two years earlier with a promise that I would return home. My brother, Ghaffar, and his family were watching over them, so I knew they were safe.

“Maybe my thoughts were on my brother Ghaffar. He was 13 when our father died fighting for Afghanistan’s freedom from the Soviet invasion. He left behind six children and my mother. When my uncle refused to help, Ghaffar worked however he could to feed and house us. Even though we had little money, he was determined to send us to school so we could have better futures.

“When we were old enough, Ghaffar enrolled me and my two younger brothers in an English-Medium School for orphans of soldiers who died in the war. We spoke English primarily, but I also learned Pashto, Urdu, Hindi, Arabic, and Dari (Farsi) over my 12 years there. My younger brother, Jalal, also became an interpreter for the U.S. military when he graduated. Our youngest brother, Rahim, went on to earn an advanced degree in agricultural sciences and worked for the Afghan government.

“Any of these thoughts could have been running through my mind as I sat under that tree. My mind should have been on IEDs. Reaching down, I picked up the loose wire and was immediately jolted into the present. I was holding a trigger for an IED.

“My mind flashed to my commanding officer telling me I was his hero. Me, a weak Afghan, carrying around body armor! When I acted surprised, he explained, ‘You come into these situations with us, empty-handed. We have weapons.’

“No weapon could save me now.

“The truth was, I was happy to help the American soldiers. My father died defending Afghanistan from Soviets who destroyed everything. But Americans built things – roads and schools and other infrastructure out of the chaos. They supported democratic government and changed our society. Most Afghans appreciated the Americans.

“All of this flashed through my mind in that instant. Heart racing, I braced for the worst. Then . . . silence. As I became aware of a bird singing nearby, I knew the IED hadn’t gone off. I could keep my promise.

“My tour with the Marines lasted just a couple years. I also served as an interpreter for some other companies working to build Afghanistan. One provided security for U.S. engineers, another built roads and bases for Afghan Special Forces. Eventually, I was able to work at Bagram Air Force Base, interpreting for U.S. Army teams. Ironically, we trained Afghan forces in how to dispose of IEDs.

“By 2019, my wife, Halima, and I had five children, and she was expecting. I could see the situation changing in my country, so I applied for an American visa for me and my family and bought plane tickets to the U.S.

“Then COVID hit, and my visa application was delayed. While we waited, Halima gave birth to our youngest child, Miriam. The situation in Afghanistan got steadily worse for those of us who helped the U.S. military. Finally, the approval came through, but only for me, Halima and the children we had when I submitted the paperwork. Miriam was not included. She would not be allowed with us into the United States.

“In September of 2020, I did the hardest thing I’ve ever done. We left our baby with my sister-in-law and boarded a plane to a place called Michigan. Halima cried the whole trip, but we had to leave to keep our other children safe. For six long months, I desperately called everyone I could think of who might be able to help. Finally, we had success. My brother Rahim went to the U.S. Embassy to pick up Miriam’s visa. Halima and I flew back to Jalalabad in March 2021 to bring her home.

“That August, when the last U.S. forces withdrew from Bagram, one of my sergeants contacted me. ‘Where are you?’ he asked. ‘I want to get you out.’ I was happy to tell him my family and I were safe in our new apartment in Lansing, Michigan.

“St. Vincent Refugee Services sponsored us. They met us at the airport and took us to our apartment they had set up for us. Our St. Vincent case manager helped us register with the Social Security Administration and the state of Michigan, so we have the identification we need. Once we had our IDs, they helped me line up a job with Peckham Industries. I wasn’t there long, though, when St. Vincent Refugee Services asked me to come work for them.

“About 90 percent of the new Afghan immigrants speak no English, so they needed a bridge between Afghans and staff members who didn’t speak the languages of my homeland. I got busy picking up new arrivals from the airport, helping them with all the support St. Vincent had given me in our earliest days here. I’m hardly in the office because I’m running around translating for everything from airport pick-ups to enrolling children in schools and helping find doctors. I’m receiving calls at 2:00 in the night, on weekends, and holidays.

“I’m not supposed to, but I gave out my cell number to help new people coming here. Now they call if they need help with transportation to the grocery store, getting bus passes or picking up checks. It got a bit overwhelming. There were so many refugees and only one of me! I was happy when St. Vincent hired more interpreters.

“My brother Jalal lives right next door with his family. He has a head for business. Recently, he purchased a semi from a friend and began making money as a truck driver. He ordered another truck for me to drive, so together we have started our own company. We named it Ghaffar Brothers, Inc. Trucking.

“One day, Jalal and I hope to bring our big brother, Ghaffar, to the U.S. He and Rahim must lay low in Jalalabad to avoid the Taliban. After all the sacrifices Ghaffar made for us, we want to keep both brothers and their families as safe as we can.

“Once all the Afghan families are settled, I look forward to driving for Ghaffar Brothers Trucking full time. For now, I get to come home to my family every night. Playing with my children at the end of the day makes me happy. I am grateful to be living the life I dreamed of years ago, sitting by the side of the road in Helmand.”