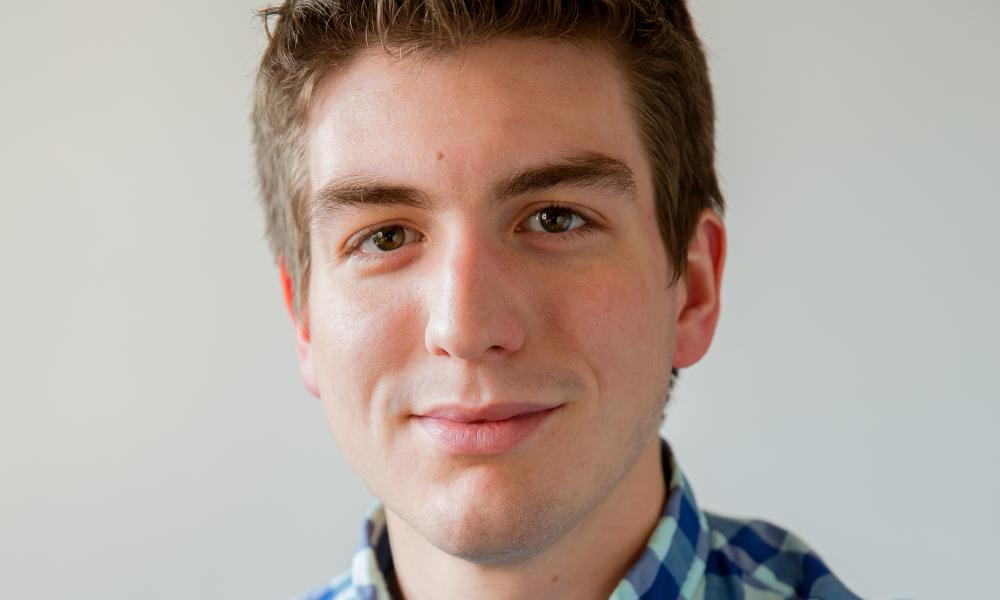 I felt at home at Mass

Paul's conversion led him to become an RCIA sponsor.

Paul Parker had spent weeks imagining how the Easter Vigil would unfold. With family and friends in attendance at St. Mary Church in Ann Arbor, Parker was overcome with emotion as he prepared to receive confirmation, becoming a full-fledged member of the Catholic Church.

But the night didn’t go as planned for the 23-year-old out of Dexter. Parker found himself battling the stomach flu. He laughs now about his indoctrination to the Catholic family, feeling the ceremony’s powerful impact months after the April 4 evening.

“For myself and all of the candidates, there was a lot of anticipation leading up to that night,” says Paul. “Lent felt like one long reflection, and then of course I was sick, but I got through it and even though I was really ill, it was just such an incredible experience to be a part of.

“When they did the readings, it felt different, I connected with them more, and then some of the candidates in the RCIA program were being baptized too and so that was really great to watch.

“That was the cool thing about the RCIA program, you’re together for the whole year, learning about the Church, its history, discovering your faith together, and so to be there for the vigil together and to see the smiles and how happy everyone was when it was their turn to be confirmed, I’ll just never forget what it felt like that night.”

An engineering student at the University of Michigan, on his way to medical school next year, Paul was born and baptized Episcopalian. His family attended church, but left the Episcopal faith before he had chance to fully develop a personal connection to God, though he acknowledges there was always something unexplainable pulling at him. He just wasn’t sure what it was.

“It wasn’t that big a part of my life,” he says. “I was public-school educated, so there was no religion in school. When I got to the University of Michigan, I was sort of asking myself, ‘Is this really something I want to make part of my life?’

“I liked the morals and sense of values that Christianity provided, and I hopped around some Protestant churches but found nothing that stuck. No one in my family is Catholic, so that world was scary to me. And whether it was because of stereotypes that I had or what I had heard, Catholicism seemed so high and mighty and not something I wanted to be a part of.”

A college girlfriend introduced Paul to St. Mary’s, easing him in. They attended Mass not out of obligation, but when he desired to be there, soon he found himself drawn to the Church consistently.

Though their relationship eventually ended, Paul wanted to keep his relationship with Christ and the Catholic Church alive, and he made the decision to continue a personal one that would not be disrupted by the comings and goings of friends, girls or family.

“I felt at home and a sense of a peace during Mass that I had never experienced before,” Paul says. “That was powerful when I realized I could see myself in this faith.

“I really liked the community and the sense of togetherness. When someone is hurting, everyone collectively prays for you, so there’s just this great sense that we’re all in this together and you never feel alone; I was really missing that through a lot of my high school years and in early college years.

“I liked that I can go anywhere in the world and the Catholic Church would be there. There might be different languages and cultures, but the Mass would be the same, the message, the traditions are all there. We’re all Catholic,” he explains.

One of the priests at St. Mary encouraged Paul to go through the Rite of Christian Initiation of Adults (RCIA) program. Praying on the opportunity presented, Paul was quickly granted an answer.

“I was confident, but then about a month into taking classes and meeting with the other candidates, I felt this sense of calmness and peace – I knew I was on the right path,” he says.

Paul began the program in the fall of 2014, and was confirmed in April 2015. Throughout the process, one of the most important lessons he learned was that his confirmation ceremony was only the beginning of his Catholic journey.

Parker has heeded that message, volunteering to serve as an RCIA sponsor for a freshman engineering student candidate this year. And Paul’s journey has inspired his parents to become RCIA candidates.

“I thought it might be repetitive, but when I started going to some classes I realized I was really missing that consistent discussion about your faith. Of course now, I’m more in a supportive role, helping to facilitate discussion and let them explore the topics, but it’s been rewarding for me, too, and I can only imagine what it will be like to watch my candidate get confirmed this year.”

At medical school next year, Parker isn’t sure if he will have time to be an RCIA sponsor again – he loves being part of the program that welcomes new Catholics into the Church – but he understands it is part of his responsibility to serve as Jesus did.

“I know my faith is going to continue to keep growing and be of the utmost importance for me to get through medical school and all the challenges I will face,” he says. “How I have responded to my current stresses after going through this compared to before the RCIA program is night and day. I just feel this tremendous support and sense of God’s presence.

“I think my faith was always there, but it was on the back burner, and now it’s just become such a huge part of my life. I don’t know what role God will ask me to do next but I look forward to encouraging the classmates I have now and in the future to become a part of this community,” he says.