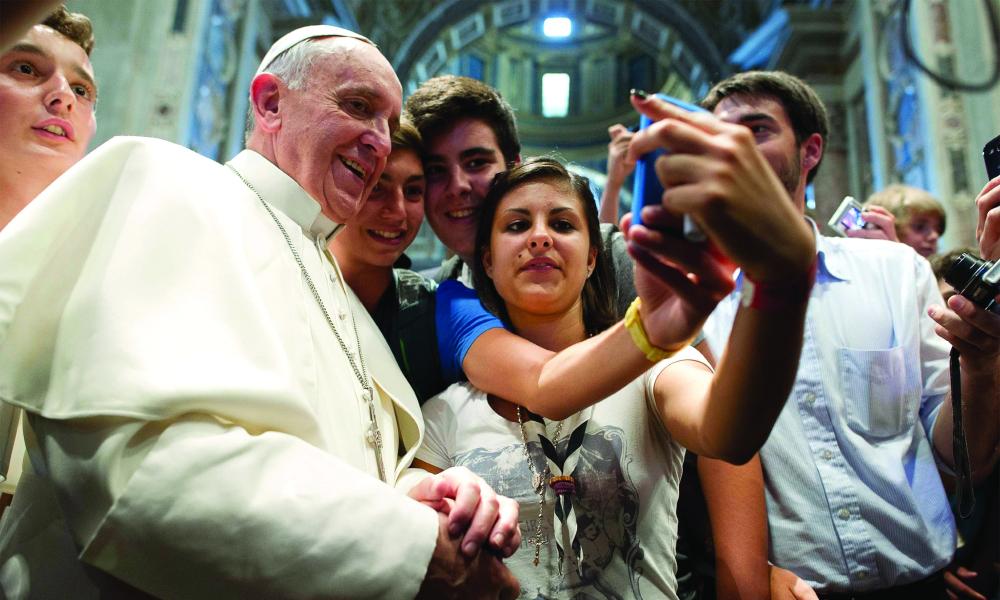 Pope Francis is an admitted thief and former bouncer, and the driver of an old used car. That is why he inspires me. He is really not that different from most of us, yet we just have a hard time realizing it because we naturally put the pope on an extremely high moral and social pedestal. Subconsciously, many of us probably imagine that the pope can do no wrong, or that the pope does not sin. Many also think that a man of such high standing and acclaim must be rich. The fact of the matter is that this famous and holy man is extremely humble and down to earth. He makes mistakes, but he is always striving to do as Jesus would. This inspires me to attempt to strive for the same because he is so much like us.

Pope Francis did not enter the seminary at a young age, but held many interesting and questionable jobs before he found his vocation. Prior to becoming the leader of the entire Catholic Church, Pope Francis was a janitor, a lab geek and a bouncer at a nightclub. Now usually when I imagine one of the most holy men in the world, I do not think of the type to kick troublemakers out of bars physically. While kicking out irritable and drunk people is a good deed, it can’t be occurring in the best setting. It inspires me how interesting and worldly Pope Francis is, and it inspires me that he does not fit the textbook profile of a regular priest, let alone the pope, with regard to his previous jobs.

Pope Francis has to be one of the most humble men alive. As the pope, he is entitled to his choice of luxury vehicles. Not only does he get a sweet ride, he is also entitled to have a chauffeur drive him around wherever he pleases. Pope Francis owns a 1984 Renault 4, and drives it around himself. Personally, if I were allowed to own a luxury car and have a personal driver, I would probably jump at the opportunity. Pope Francis, however, understands the importance of humility, especially in his line of work. It inspires me to see a man offered so much accept so little, and instills in me the desire to do the same.

I often find myself daydreaming at Mass, or falling asleep during my prayers. I try not to beat myself up over this fact, but it still bugs me a little bit that during the times I am supposed to be giving God my full attention, I can be so careless and doze off. I would imagine that a man like the pope would not have such a problem, but alas, Pope Francis has again shocked me with his inspiring human weaknesses. Pope Francis has admitted to dozing off during his nighttime prayer occasionally. It amazes me that the pope can suffer from this problem because I sometimes forget that he is only human, too. I do not doubt that Pope Francis loves God above all else, and if he can suffer from the same attention-span issues that I do, it gives me hope not to get discouraged.

Dozing off during prayer is one thing, but committing a sin and breaking one of the Ten Commandments is completely different. Nothing bothers me more than when I break one of God’s rules, because they are so specific and they are given to us to follow. I never imagined the pope could be capable of breaking these rules, but Pope Francis again showed just how human he really is when he admitted to stealing. He once stole a rosary from another priest’s corpse, and kept it for years in his pocket to remind himself not to think badly of others, because he himself is imperfect. I find that amazing. I always struggle not to judge others, and I am sure the pope is not condoning stealing something to remind us of our imperfections, just showing us that even he is imperfect. Yet again Pope Francis has managed to inspire me with his imperfections.

Pope Francis is one of the most humble men alive. He admits his mistakes in life to large crowds, and I am sure these are things he is not necessarily proud of. Yet, he understands the struggles we all have as humans, because he too suffers from the same struggles. Rather than hide from the things he may be ashamed of, Pope Francis chooses to admit his faults to us to keep us from getting discouraged in our faith. His willingness to step down from the high pedestal we put him on is amazing, and inspires me incredibly.

Every year, FAITH awards a $1,000 scholarship to a high-school senior in our diocese, based on an essay on a topic related to life in the Church. Our goal is to promote insightful thought and excellent writing, and to encourage careers in Catholic journalism. There are many ways to spread the Good News of Jesus Christ, and good writing is one of them. We hope you enjoy this year’s essay by Ryan Johnson of Gabriel Richard High School.