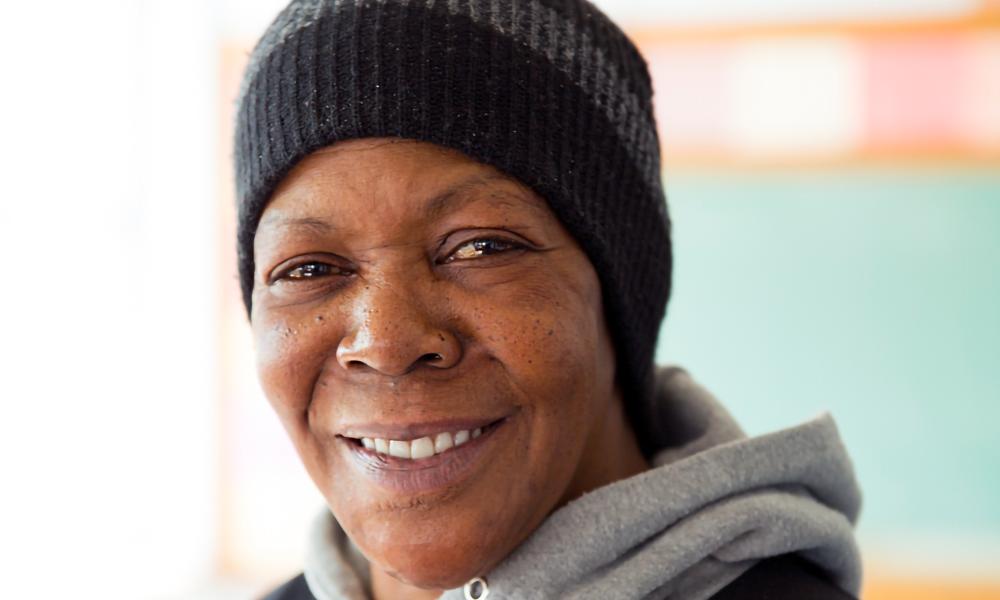 Glenda says she’s a changed woman, thanks to the Center for Hope

“I would look around at people on the bus and think ‘They’re normal. Why can’t I be normal?’ But every time I tried to get off the heroine, the sickness would start. I was totally dependent. ‘Couldn’t function without it, even though it ruined my teeth, gave me terrible diarrhea and made me hurt all over.

“I used to pray to God all the time ‘Please help me not feel so sick,’ but the only thing that took it away was another hit. Even when I went to prison for shop lifting (that’s how I paid for the heroine), I was using inside. I financed my habit by putting ads in the Globe magazine. Men would send me money because I told them I’d meet them when I got out. I never meant it, but they sent the money anyway, believing me.

“It wasn’t always that way. I was the youngest of four kids. Mom and Dad both worked at GM and provided for us. My brothers and sister and I never lacked for anything. Being around them as a kid was some of the happiest times. But I wanted to be grown up. My brothers and sister started doing drugs in high school and they looked real good. I wanted to feel like them, try their lifestyle. So at 13 I started skipping school. I tried marijuana then moved to mescaline and cocaine.

“I remember when I first tried heroine, that euphoria feeling! I wanted it over and over again. When I was 16 I dropped out of 10th grade. I lived with my mom and shoplifted to get money for drugs. I was selfish getting high, so I decided not to have kids. I went on birth control pills so my mom wouldn’t have to raise my children like some women do.

“My parents got divorced and Dad moved out, but Mom let me stay with her when I wasn’t locked up for the shop lifting. Even after all my felony convictions and trips to prison, I was using every day. When my mom died in 2000, I lost the house. My dad had remarried so I had nowhere to go. I ended up in prison again, but this time I earned my GED and took one year of psychology classes toward a college degree.

“One day I called these people on a hotline, and the next day I was checked into Sacred Heart Rehab Center in Memphis, Michigan. I learned more about what the drugs did to my body – what was making me so sick when the heroine wore off. It made it easier to get off it for good, especially when they gave me methadone to treat the symptoms. I’d been clean from heroine for three years and off methadone for 14 months when I came to Catholic Charities.

“When I left Sacred Heart I was homeless. I tried rooming with a friend over the winter, using my social security payments to cover the rent. But when we got evicted on January 12 I had already given her my social security check so I had nowhere to go and no way to pay for anything. An acquaintance told me about Center for Hope Warming Center so I decided to check it out.

“When you’re homeless you feel useless. Some people don’t know how to get a job. Some people are afraid to change. When I went off heroine the first time it was scary. I didn’t feel worthy, and I didn’t want to get an apartment on my own because I thought I’d be using again.

“I came into the Center for Hope Warming Center and I found people just like me who want to change their life around, searching for help. And I also found people who treated me nice. Real nice. They showed compassion. Strangers be caring about you? I thought, ‘Well cool! Deal me in!’

“These people are so nice, and they don’t even know you! I don’t mean to cry, but . . . the people who live downstairs [Warming Center guests] are like family! We’re people having the same problems – drugs and alcohol, and women who give money to boyfriends and lose it when their men skip town – but we try to help each other. We make space by pushing back the room dividers to make room on the floor when new people come in from the cold.  Some people have found homes, but they still come back just to have lunch because they miss each other!

“That was me! Since I first came here, Resource Genesee helped me get an apartment and Catholic Charities even helped me furnish it through their Community Closet. My first night in the apartment, though, I felt so lonely! I missed my family here at the Warming Center, so first thing in the morning I climbed out of my sleeping bag and headed back down to the Center for Hope Warming Center.

“Other shelters put you out from 6:00 in the morning until 6:00 at night. And lots of times you don’t feel like going out because it could cause you to start using again or getting into bad situations. Here, they give you stuff to help yourself. And there’s always someone willing to listen to you. I have a Genesee Health System case worker who helps me with therapy and medicine for my bipolar disorder, but they haven’t done for me what Catholic Charities has.

“I’m a changed woman. Now I talk to God all the time, saying ‘Thank you for helping me stay sober!’ My faith got bigger because I met people who really care. I have faith in people and in myself, and most of all I have faith in God. I plan to go back to school to become a social worker specializing in drug therapy, but I’ll still be coming back here to volunteer and give back to the Center for Hope.

“I’m alright with me. I just wish I hadn’t wasted so much of my life. Homelessness, jail, misuse and distrust—there wasn’t nothing good. No happy times except when I would get the drugs. Now I know there’s always hope and there’s people who care even when it seems like there ain’t nobody who does.