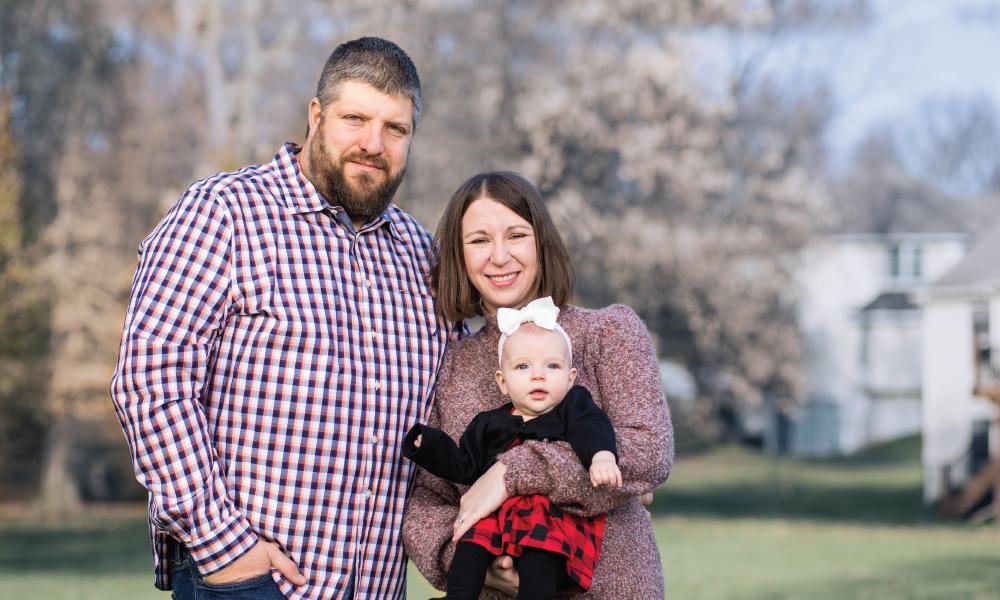 ‘God Has Favored Me With a Child’

Andrew and Kathy Begin Their Season of Joy

“For everything there is a season, a time for every activity under heaven.”

Sometimes in the thick of living, we lose track of that truth. But for Kathy and Andrew Rademacher, life and death, tears and laughter, searching and finding have been powerfully present throughout their journey.

A Time to Embrace and a Time to Turn Away

“We met on a Saturday night,” Andrew thinks back to when he was 25 and Kathy 21. “My best friend’s wife had gone to school with Kathy and invited her to join our group at the Whiskey Barrel [restaurant]. We talked and exchanged screen names. At the end of the night, Kathy gave me her phone number. But on our second date, she let me know she was not going to date while she was in nursing school.”

Kathy laughs. “Nursing school was hard! I didn’t have time for a boyfriend. It was a while before we went on our next date. But I remember somewhere in that time he called and asked me to pray the Divine Mercy with him and his sister. We prayed together over the phone. That was when I knew he was special.”

“It took me six months to wear her down,” Andrew smiles. “I went to her commencement and later that night, I said: ‘So, I think that ceremony we went to today means you’re not in school anymore.’ She said, ‘I am not.’ We’ve been together ever since!”

A Time to Search and a Time to Quit Searching

“We got married at St. Gerard Parish in 2009. Kathy had her nursing career and I worked in the heating and cooling industry. Things were chugging along in our marriage, so after a couple years we started actually trying to get pregnant,” Andrew says. “Every month was tough when Kathy started her period. I would come home, and I knew she had been crying.”

Kathy explains, “We had dear friends who were also trying to get pregnant and finally succeeded. My sister and brother had no problems. In April of 2013, I had laparoscopic surgery for the endometriosis that plagued me since I was 13. My gynecologist told us there’s no reason we couldn’t conceive.

“I did some acupuncture, drank some weird tea and in October we found out we were pregnant! That Thanksgiving we told everyone after we had seen the baby’s heartbeat. But the next appointment, our nurse couldn’t find the heartbeat again. I miscarried at seven and a half weeks. We were devastated.

“We wanted to stay true to Catholic teaching and tried everything within that scope with our primary care and our obstetrics and gynecology (OB-GYN) doctors. I did see a reproductive endocrinologist at one point and did a couple months of medicated cycles, but did not do anything beyond that.”

“About two and a half years after the miscarriage, we found acceptance,” Andrew says. “We decided we were going to be a great uncle and aunt because that was what God wanted for us.”

A Time to Grieve and a Time to Dance

“At the end of 2015, my father, Joseph Rademacher, passed away.” Andrew pauses. “Now this is coming from me, but I think my dad was a really good man. Sitting in St. Michael’s  [Grand Ledge] where I grew up, I got to hear all these people talk about how he touched them.”

Kathy agrees, “We learned a lot about my father-in-law at his funeral. That sounds strange, but he didn’t ever talk about the good things he did or the people he helped. That day, the stories came out and we saw what a difference he made in others’ lives.”

Andrew continues, “It made me want to get more involved in our church. Since we had moved to DeWitt, that meant switching parishes from St. Gerard to St. Jude. Kathy resisted, but I felt sure St. Jude should be our church home. When Dad died, I went to my first Knights of Columbus meeting there. They didn’t know me from Adam, but they welcomed me right away.”

A Time to Keep and a Time to Throw Away

“A lot of knights are older men who don’t have little kids to worry about. Birds of a feather seem to flock together, and we had lots in common despite our age differences. I felt very comfortable. A few weeks later, Kathy came home and announced that we were officially enrolled at St. Jude.” Andrew looks at his wife through tears, and Kathy smiles back wiping her eyes.

“I went 100 percent in that direction, and the next year I became the Grand Knight. The next two years, Kathy and I were busy with those responsibilities. We made lots of lasting friendships over that time.”

A Time to Tear and a Time to Mend

“After we had decided not to pursue other fertility measures, Andrew’s sister approached us about adopting. She knew of a private adoption agency that specializes in placing children with Catholic families. Andrew and I prayed about it. To be honest, I felt bad that we never felt good about adoption. But we just never felt called to adopt, so we declined.

“Shortly after Andrew’s term as Grand Knight ended, my friend and colleague Jess reached out. She was expanding her nursing practice to include a fertility approach called the Creighton Model. She wanted to learn by working with me. I told her we had already shut that door.

“Jess was gentle and asked me to help her learn. Finally I said, ‘I’ll do it, but only to support you.’ I told Andrew I was helping Jess, and I began to chart my mucus cycle for quantity, color and viscosity.”

Andrew gently interjects, “With the Creighton Model, husbands usually help out, but Kathy kind of made it clear this was just something she was doing for a friend. Not that I like talking about cervical mucus or anything. But she didn’t involve me too much.”

“I just couldn’t open that door again,” Kathy says simply. “When Jess suggested that she could help, I was afraid to get my hopes up. Again, she gently guided me to a Catholic gynecological surgeon who specialized in NaPro [Natural Procreative Technology]. After three hours of carefully removing the unhealthy spots in my uterus, the surgeon suggested we allow three months to heal. Then we should try again. That fourth month, I missed my period.

“I didn’t want to get attached because I might lose this baby too. When I started bleeding at six weeks, the devastation roared back. But Jess guided me to a Catholic OB-GYN who started me on Progesterone. I took it for 36 weeks and my pregnancy proceeded normally.

About halfway through, I began to allow myself to consider names. We had planned to call a boy Joseph, after Andrew’s dad, but couldn’t settle on a girl’s name.

“One morning I told Andrew, ‘A dream last night gave me a strong sense our baby is supposed to be Hannah.’ We looked up Hannah’s meaning and read: ‘God has favored me with a child.’

As Andrew and Kathy hand their lively baby girl back and forth, anyone can see that Hannah has launched this little family’s season to laugh and to love.

Learn more about the Creighton Model at creightonmodel.com.