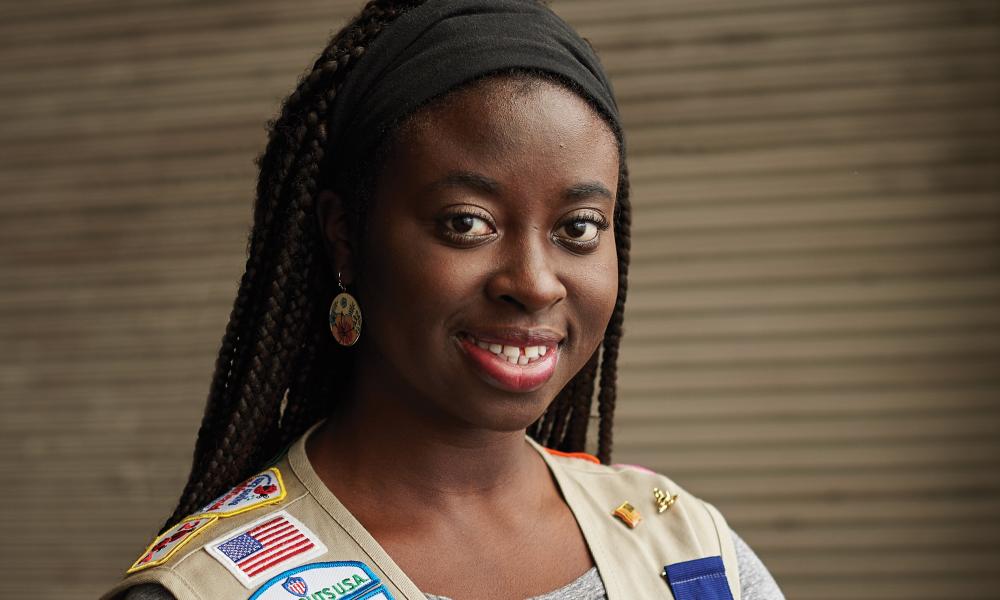 For Marie, a Lifetime Girl Scout, faith and scouting go hand-in-hand. “I was able to better my faith in an activity that was fun at the same time,” she says.

Marie earned the designation “Lifetime Girl Scout” because she also received the highest award a Girl Scout can receive, the Gold Award, when she was a junior in high school. The number of scouts who receive this award is very small, and Marie is one of the first in the Diocese of Lansing to have earned it.

“[Being a Lifetime Girl Scout] means that, after I received the Gold Award, [I’m] extending,” Marie explains. “You’re not saying, ‘OK, I finished the highest award, now I’m done with that.’”

For her Gold Award project, Marie focused on Burkina Faso – a country in West Africa from which her parents emmigrated – and educating people about the needy in Africa and how people there maintain a life of faith, even though they have so little. She called her project “A Piece o’ Africa.” It included a clothing and shoe drive, and the donations were shipped overseas to African churches for distribution to those who needed them.

Marie is in Vermont now attending medical school and living a “normal” life. But she also carries a special oath everyday – to fulfill her duties as a Lifetime Girl Scout by maintaining a life of service and sisterhood with the Girl Scouts. Whether it’s helping with administrative preparation for meetings or helping to compile an awards database that dates back more than 30 years, Marie keeps the Girl Scouts in her life. It’s “doing the everyday,” as she calls it.

Marie credits her parents for motivating her and instilling her with the drive and determination to complete all of her awards. Her father worked hard to become an engineer and eventually be able to move to the United States from Burkina Faso, and Marie’s mother was a driving force behind the Girl Scouts, reminding her often that many people back in Africa didn’t have opportunities like these.

Marie feels she has become more mindful in her relationship with God by focusing on prayer for others outside herself and her inner circle. “It for sure has had a big impact … I remember every single meeting that we had, we would recite the Girl Scout Law and Promise … and I just think that that’s had the biggest impact on me, especially for what I want to be and do in life.” Marie’s career goal is to be a reconstructive plastic surgeon to help children who are born with facial deformities.

“Girl Scouts definitely helped me grow and strengthen my faith in God and also my everyday activities.”

Click here for more information on scouting in our Diocese.

Can your parish have a Scout troop?

You may have heard concerns about partnerships with Girl Scouts USA and its formational material for troops. The National Federation for Catholic Youth Ministry has addressed this by engaging the Girl Scouts on a national level. For the last few years, the GSUSA has sent its material to our national Catholic committee for review, and material contrary to our faith has been removed. The printed resources and materials our troops use reflect our values and beliefs.

The National Committee for Girl Scouts and the Boy Scouts Catholic Committee on Scouting have an episcopal moderator who works with and guides these Catholic leaders, reports to the USCCB and helps them to continue the work of evangelization through Scouting.

Our Diocesan Scout Committee is made up of Girl Scout, Boy Scout and American Heritage leaders. The other wonderful work of this committee is the production of religious award medals that boys and girls work on and earn each year. By Feb. 1, they submit for receiving this award at our annual ceremony. The award ceremony this year will be April 10 at St. Mary Cathedral in Lansing.

Focuses on the role Girl Scouts play in Church and family life, and on Scouts’ relationships with God.

I Live My Faith

Girl Scouts learn about saints, the beatitudes and living in faith.

Girl Scouts discover how the Holy Spirit works in their lives and how to demonstrate that to others.

Focuses on understanding Mary’s role as the young mother of Jesus, a woman of the Church and a great role model.

Awarded to scouts who have received all four Roman Catholic Religious Awards, listed above