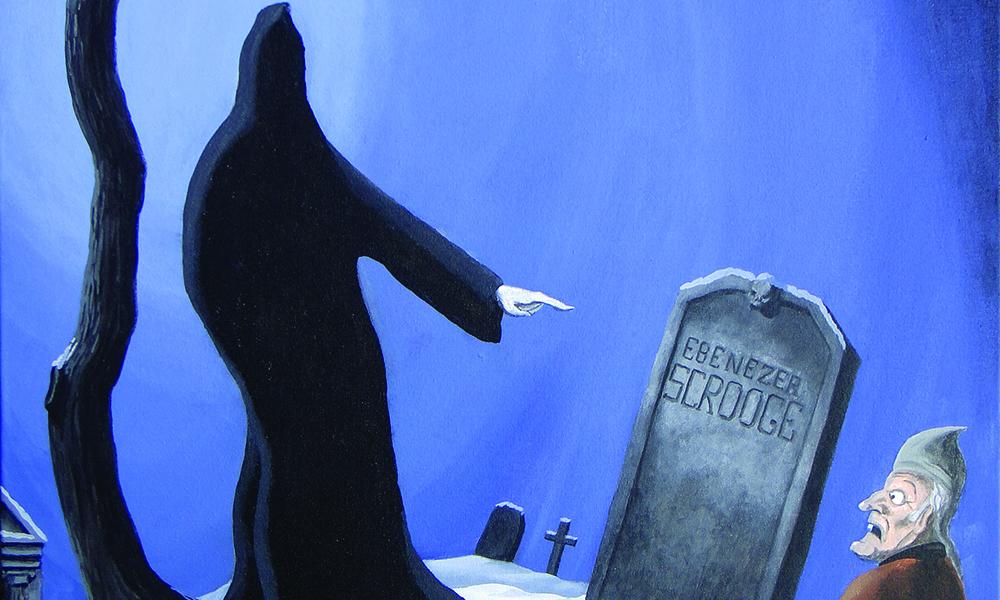 The Ghost of Christmas Future

Let us remember that, as Catholics, Advent calls us to much more than shopping and busy-ness during this important season. As we read in the catechism, “The coming of God's Son to earth is an event of such immensity that God willed to prepare for it over centuries. He makes everything converge on Christ: all the rituals and sacrifices, figures and symbols of the 'First Covenant.' He announces him through the mouths of the prophets who succeeded one another in Israel.” (522)

The Ghost of Christmas Future: The task to abide

The imposing figure of the third ghost, without speaking a word, reveals to Scrooge the fruit of a life lived in an all-consuming selfishness: death. Scrooge, in this one night, has already relived the loss of loved ones in the past and experienced the loss of the joy in life in the present. He now sees that his self-centered ways will lead to both his own unremarkable death, devoid of mourners, and to the death of Tiny Tim. He realizes that just because he believes himself to be unrelated to his neighbors does not mean that, in reality, his life, and how he leads it, does not affect his neighbors.

From this moment, Scrooge must make a decision to continue in his own selfish ways – elevating the acquisition of money above his fellow human beings – or to turn his life totally upside down (which in this case would be right side up). What future will he believe in: the one that leads to both his death and the death of Tiny Tim, or the one that leads to life?

This brings us to the third task of Advent that challenges us to not only believe, but to abide in the belief that Christmas Day not only remembers Christ’s Nativity in the past and celebrates Christ’s dwelling among us in the present, but also looks forward to Christ’s Second Coming at the end of time. The four weeks of Advent, then, invite us into a period of intentional waiting and prayer. Even more difficult, it calls us to live in a way that manifests our true belief in Christ’s coming. In other words, abiding looks like something.

When Scrooge awakens to learn that he has not missed Christmas Day, he is overjoyed and determined to act. His charity pledge, his purchase of the prize turkey for the Cratchit family and his spending Christmas with his nephew all demonstrate what he has learned from the three ghosts. He has indeed remembered who he is; he will enter completely into the present celebration; and he will abide in the belief that Tiny Tim does not have to die at such a young age.

The question remains: Will we learn the lessons of the three ghosts as did Scrooge and embrace the three tasks of Advent? On Christmas Day, will we feel that same immensity of joy when the meaning of Advent, and the entire Christian journey, rings out in song: “We remember how you loved us to your death, and still we celebrate for you are with us here. And we believe that we will see you, when you come, in your glory Lord. We remember, we celebrate, we believe.”