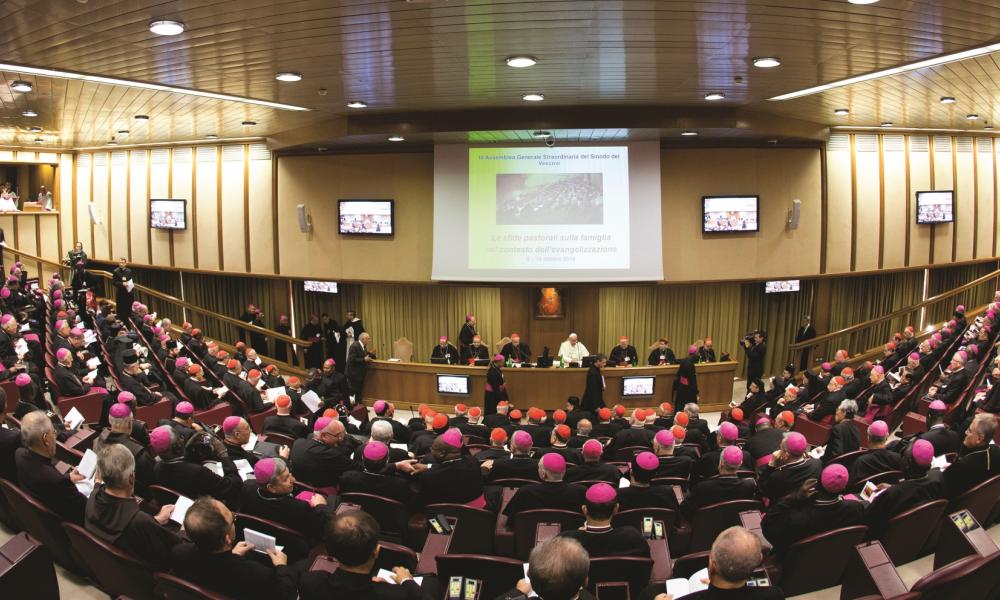 The Third Extraordinary General Assembly of the Synod of Bishops was held in the Vatican from Oct. 5-19, 2014. The theme for the assembly was “The Pastoral Challenges of the Family in the Context of Evangelization.”

The Extraordinary General Assembly was tasked with defining the “state of the question” and with collecting the bishops’ experiences and proposals “in proclaiming and living the Gospel of the Family in a credible manner.” The Ordinary General Assembly, scheduled for Oct. 2015, will next “seek working guidelines” in the pastoral care of the person and the family.

On Oct.18, the synod released its much anticipated final report. An earlier mid-term report had generated a great deal of discussion and confusion both inside and outside the Church, especially with regard to the topics of homosexuality and the divorced and remarried. However, the final report clarified the mid-term report on the aforementioned topics, incorporated Scripture quotes (which were noticeably absent in the mid-term report) and focused more on the positive contributions Christian families can make to society.

Each of the 62 paragraphs of the final report was voted on by 181 of the 193 synod fathers. According to a Catholic News Agency/EWTN report, all the paragraphs received a majority of votes. However, not all claimed a super-majority of two-thirds of the vote, which is required for official approval. The same report went on to cite an Oct. 18 press conference with Father Federico Lombardi, director of the Holy See press office, as he explained that for the purposes of the 2015 synod, the paragraphs that failed to gain official approval “cannot be considered as dismissed, but primarily as paragraphs that are not mature enough to gain a wide consensus of the assembly.”

Ultimately, the final report of the 2014 synod is not a definitive document. It is important to note that, according to Canon Law (Canons 342-344), the Synod of Bishops consists of a group of bishops chosen from different parts of the world who meet at fixed times in order to foster unity, to offer counsel to the pope in matters of faith and morals, and to consider questions related to the activity of the Church in the world. The Synod of Bishops is subject directly to the authority of the pope, and is not charged with resolving questions or issuing decrees about them unless the pope specifically endows the synod with deliberative power and then ratifies the decisions of the synod.

Consequently, the 2014 final report serves only to set the stage for the 2015 synod, where it will function as that synod’s working document. Then, the 2015 synod will report to Pope Francis, who will issue a post-synodal apostolic exhortation that will seek to help the Church face the challenges of the family in today’s world.

According to the Vatican News, synod participants came from five continents and included: 114 presidents of Episcopal Conferences, 13 heads of the sui iuris Eastern Catholic Churches, 25 heads of the dicasteries of the Roman Curia, 9 members of the Ordinary Council of the Secretariat, the secretary general, the under-secretary, 3 nominees from the Union of Superior Generals, 26 pontifical nominees, 8 fraternal delegates, 38 auditors (including 13 married couples) and 16 experts.

Pope Francis presided at the beatification of Pope Paul VI on Sunday, Oct. 19, 2014. The ceremony was held at the conclusion of the Third Extraordinary General Assembly of the Synod of Bishops. The beatification could not have come at a more appropriate time given the fact that it was Pope Paul VI who permanently established the Synod of Bishops on September 15, 1965, in the Apostolic Letter, Apostolica Sollicitudo, as a way to provide for frequent, regular opportunities of the kind of episcopal collegiality emphasized during the Second Vatican Council.

Our faith calls us to live in the tension that is the life of Christian discipleship; that is the way of the cross. The “Great Both…And…” of the Catholic faith helps us to do this by reminding us to avoid reducing reality to the security of a partial truth in order to escape from the possible tension of the fullness of truth, who is an “indivisible” person, Jesus Christ.

Pope Francis used this principle in his concluding speech to the synod on Oct. 18 as he described, for example, some of the temptations that confronted the participants:

“One, a temptation to hostile inflexibility, that is, wanting to close oneself within the written word, (the letter) and not allowing oneself to be surprised by God, by the God of surprises (the spirit); within the law, within the certitude of what we know and not of what we still need to learn and to achieve. From the time of Christ, it is the temptation of the zealous, of the scrupulous, of the solicitous and of the so-called – today – ‘traditionalists’ and also of the intellectuals.”

Then, Pope Francis immediately pointed to an equally debilitating temptation:

“The temptation to a destructive tendency to goodness, that in the name of a deceptive mercy binds the wounds without first curing them and treating them; that treats the symptoms and not the causes and the roots. It is the temptation of the ‘do-gooders,’ of the fearful, and also of the so-called ‘progressives and liberals.’”

The synod’s mid-term report caused uproar when it referred several times to the “law of gradualness” in its discussion of divorced and remarried Catholics receiving the sacraments of penance and Eucharist.

As it is used in Catholic moral and pastoral theology, the “law of gradualness” encourages people to grow closer to God and his plan for our lives from an initial conversion to perfection in a step-by-step manner rather than in a single step.

However, this is not to be confused with “gradualness of the law.” Pope St. John Paul II, in his apostolic exhortation Familiaris Consortio, wrote:

“[Married people] cannot however look on the law as merely an ideal to be achieved in the future: they must consider it as a command of Christ the Lord to overcome difficulties with constancy.

And so what is known as ‘the law of gradualness’ or step-by-step advance cannot be identified with ‘gradualness of the law,’ as if there were different degrees or forms of precept in God’s law for different individuals and situations.” (34)

The 1997 Pontifical Council for the Family put it this way in a handbook (Vademecum for Confessors):

“The pastoral ‘law of gradualness’, not to be confused with the ‘gradualness of the law’ which would tend to diminish the demands it places on us, consists of requiring a decisive break with sin together with a progressive path towards total union with the will of God and with his loving demands.” (3:9)

"You may have heard or read that this Synod has been about changing the teaching of the Church on marriage, family life or sexual morality. This is not true. It was about the pastoral care that we try to offer each other, the ‘motherly love of the Church’, especially when facing difficult moments and experiences in family life.”

“If there is not integrity in how we pray, how we worship, what we believe and how we provide pastoral practice, it will break down. What I have called for, in any amendments that I was able to provide, was to make sure that any creative pastoral practice being considered would be firmly grounded in good, solid theology.”