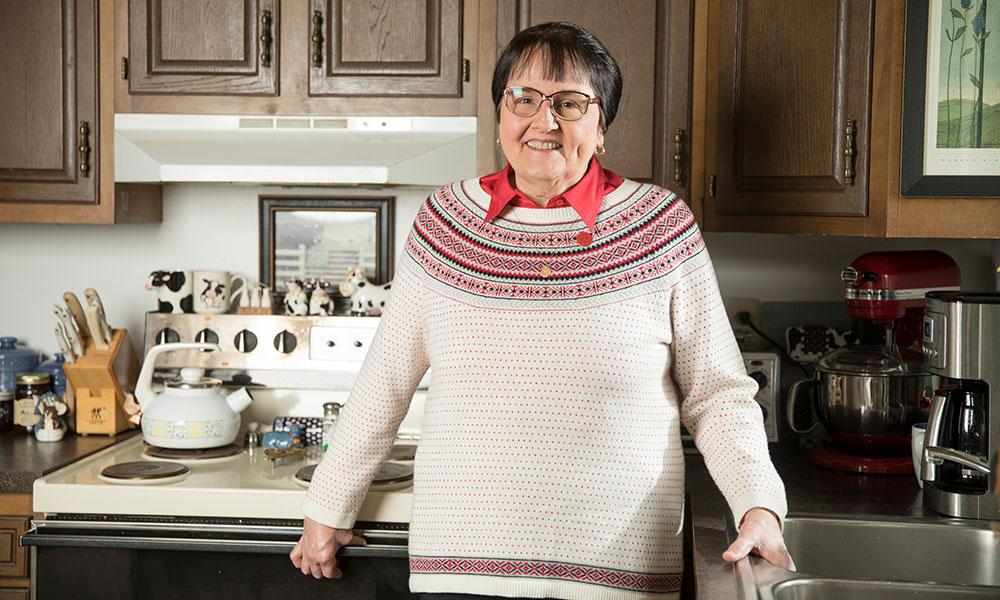 ‘Finding a Place to Thrive While Doing God’s Will’

It’s been nearly 30 years since her husband, Dan, was ordained to the permanent diaconate, and now Mary Fairweather “can’t imagine” not living their life as a married couple who has served the Church, raised a family and maintained their own careers through this particular calling. Even when intense, it’s been a joy-filled vocation: “It’s funny; I don’t even think of [the sacrifices] as sacrifices,” she says. Mary carries herself with the peaceful confidence of having found a place to thrive while doing God’s will.

“I’ve always known I was called to do something special,” she says. “If I support the Church, and God and him, then God has given me a gift that’s only blossoming the older I get.”

It's a confidence that has taken time to nurture, and for that Mary credits open communication with Dan and wise spiritual direction from outside their marriage. She’s immensely proud of her husband, but also pushes back against assumptions that a deacon’s wife – or the deacon himself – can be shoehorned into certain roles in the Church.

Encouraging each other’s individual call and strengths has been crucial, Mary believes, and it’s advice she’d hand down to other couples discerning the permanent diaconate – or any married couple in general.

In the case of the Fairweathers, Dan has always been passionate about youth ministry, and ever since his  ordination in 1995 as a deacon at St. John the Evangelist Parish in Davison, the parish youth group has been his main focus. Dan and Mary were more or less set up by the youth group, when the then-recent college grads met as catechists in 1978. “It was [the youth minister’s] way of getting Dan talking to a girl,” Mary laughs, and their students began asking if they were a couple. They married at St. John’s two years later, and soon had two children.

Mary, meanwhile, had studied pharmacy, and she continued working in a Davison pharmacy while Dan eventually began diaconate formation. Working Saturdays meant she often couldn’t attend formation classes with him: “I’d come when I could, and give my assent when it was time,” Mary says, describing the supportive but fairly backstage role she took in those years.

Mary has learned to recognize that she and Dan have different strengths. She’s been involved at the parish over the years, especially teaching RCIA, but Mary came to see her work at the pharmacy as a ministry as well. It was her way of supporting their family, while “trusting that I would meet Jesus in my job,” whether it was someone with a recent cancer diagnosis or an unexpected pregnancy.

As the youngest deacon couple in the community, Dan and Mary’s availability to serve the Church while remaining faithful to their family responsibilities came in waves – when Dan was newly ordained, the three older deacons in the parish pulled a lot of weight so he could be present to his teenagers. And although both Dan and Mary believed they’d been called to a life of deep conversion and “to do something more,” they were always reminded to prioritize their marriage and family over service to the parish.

“Marriage is the starting point, and the diaconate blossoms out of that,” Mary says. The fact that deacons, once ordained, are not allowed to remarry even if their spouses die was taken seriously.

“Dan was always told to choose our marriage first – because if that marriage falls apart, you don’t get another chance.”

In terms of how married couples might begin discerning a call to the diaconate life, Mary has some practical advice.

“If you can, maintain a relationship with a spiritual director,” she says. “Pray first, and keep talking to each other about what you feel called to.”

That communication, especially when you begin to worry about the vocation’s toll on your spouse, is crucial. Voice those concerns and “really talk it out,” she says. “Dan is very calming for me, and he’s always been able to help me see he was okay.”

Mary encourages wives especially “to not be afraid.”

“A wife needn’t worry she has to change her whole life just because he’s a deacon – I didn’t,” Mary points out. “I lived out my whole career, and I did what I could do at church when I was able. We have to be called ourselves, so we can be happy too.”

“Where’s your call? Where do you see yourself?” she asks. Those answers will be particular to each person – a realization that has brought Mary peace.

For more information on the permanent diaconate, contact Deacon Ken Preiss at kpreiss@dioceseoflansing.org.