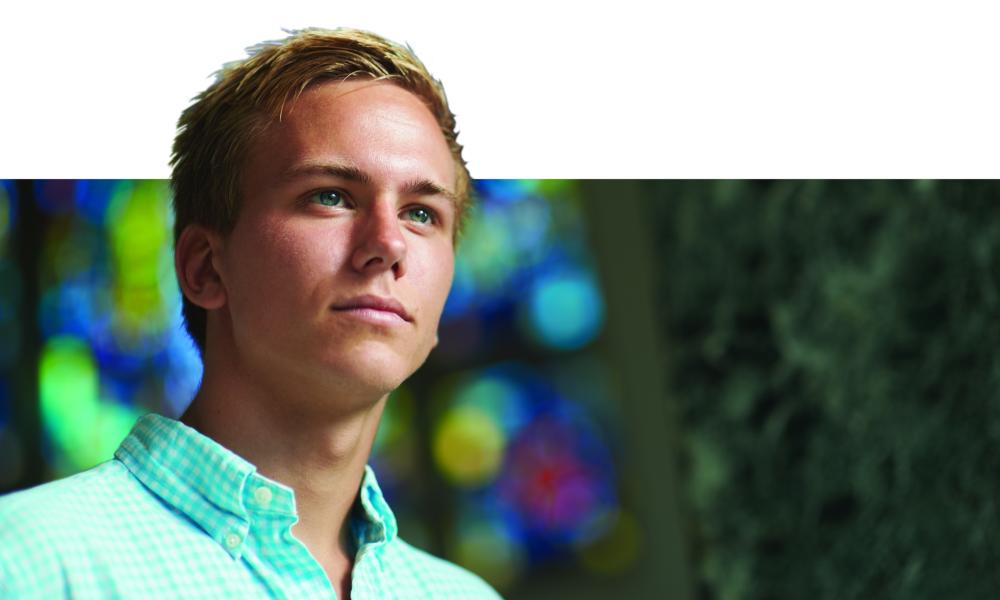 Finding a friend in God

Charlie Ludlow is a “relationship” kind of guy – he has a big group of friends, but one best friend; he had one girlfriend for almost all of high school; and he is close to his family. His relationships are important to him.

“Relationships are all about the ups and downs,” Charlie says. “No matter how great the relationship is, there always will be some downs. You just have to stick it out until it gets better again.”

Charlie’s relationship with God, though, took more time to develop. Like most high-school kids, he found having a personal faith is tough to develop. Social pressure and hectic schedules make finding time for prayer and service difficult, if not seemingly impossible.

“I have gone to church my whole life, but I don’t think I understood why until I got a bit older,” says Charlie. “I’ve always gone through the motions, but now it really means something to me.”

Looking back, Charlie cites a few important milestones in his relationship with God: his retreat experiences, a friendship with a former Lumen Christi High School chaplain, Father Geoff Rose, and the example of his father.

“My sophomore retreat really gave me a personal relationship with God,” Charlie says. “But Kairos made God a friend.”

The sophomore retreat, Charlie says, also was the start of his friendship with Father Rose, who was his leader. “Having such a powerful experience at that retreat, and being in his group while it happened was just such a bonding experience,” Charlie says.

“I convinced him to run cross country as a junior,” Charlie says. “We both also were invited to join Esto Vir, Father Rose’s group for junior and senior guys. We started doing everything together.”

Esto Vir, from the Latin phrase meaning “be a man,” played a pretty big role with Charlie. Founded by Father Rose and Father Joe Krupp, a former Lansing Catholic High School chaplain, the group is comprised of junior and senior guys from a diverse collection of friend-groups from each class. It’s meant to teach and encourage leadership in school and life. “It was one of my favorite parts of high school because it kept me grounded,” Charlie says. “Our meetings once a week were a highlight of the week for me.”

“Esto Vir helped me understand leadership,” Charlie says. “Part of learning leadership was learning how to lead people to a relationship with God.”

The group’s guiding principle, “The Warrior Creed,” stresses respect – for parents, friends, and yourself. “I have a great relationship with my parents, and my dad is like my best friend,” Charlie says, “but it is always good to have a reminder to be respectful, and a group to hold you accountable.”

Charlie’s dad plays a big role in his life, and was a big influence in his relationship with God. “When my parents got married, my dad converted from Presbyterianism,” Charlie says. “He didn’t do it just to get married though. He wanted to know what he was converting to, and he wanted to be committed. Having a dad that really wanted to commit to the faith helped me be interested in it, too.”

Instilled with his dad’s sense of commitment, and armed with a relationship with God of his own, Charlie is ready to make the transition from high school to Siena Heights University in Adrian, and to run cross country and track in the fall. He knows, though, that he has his relationships to fall back on when he is unsure or out of his element. “I know that relationships based in faith are going to last,” Charlie says. “I know I can count on my relationships because they all have that faith element.”