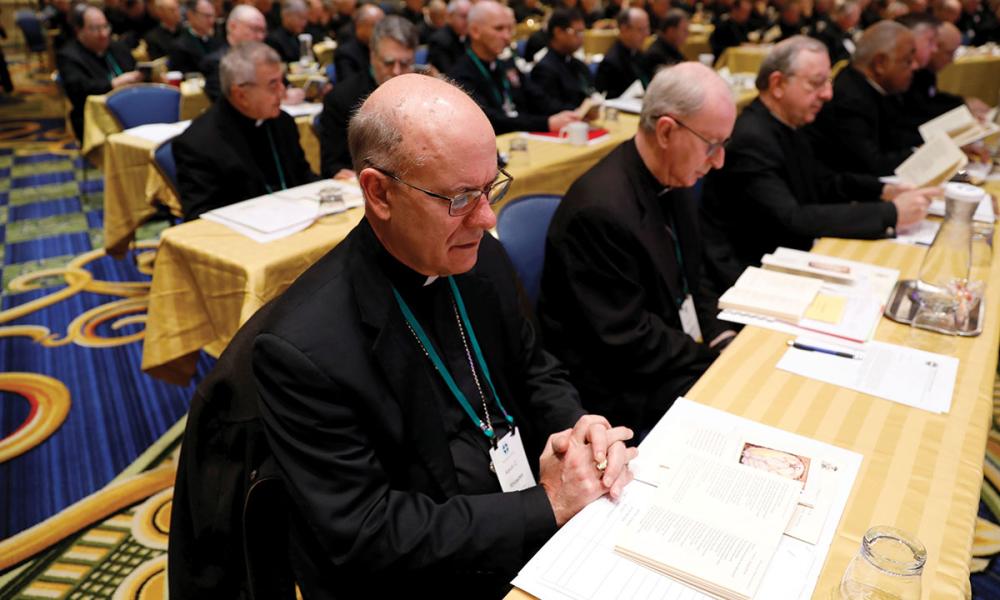 Every year, the United States Bishops meet in Baltimore, the first diocese in the country, to discuss issues in the American Church today. At the meeting this year on Nov. 12-14, the bishops were prepared to discuss and take action on some important issues.

Plans for taking action to address the crisis of sexual abuse by clergy were abruptly halted when a request from the Congregation for Bishops postponed the assembly’s plans to vote on proposals addressing the crisis in the United States.

USCCB (United States Conference of Catholic Bishops) President Cardinal Daniel N. DiNardo, of Galveston-Houston announced at the opening assembly that the U.S. Bishops were asked to delay voting on the proposals until bishops from around the world meet with Pope Francis in February to discuss the crisis.

The U.S. Bishops had planned to vote on adopting three proposals for action related to abuse: a new Standards of Episcopal Conduct for bishops, protocols for removing bishops because of abuse and the establishment of a new commission to process allegations of abuse against bishops.

Cardinal Blasé Cupich of Chicago called on the bishops to discuss and refine the proposals despite postponing the vote on them. He urged the U.S. Bishops to meet again in March to discuss the February meeting and to vote on protocols.

Presidents of the 114 Conferences of Bishops and the 21 Eastern-rite Patriarchal Synods, Councils of Churches and Assemblies of Ordinaries are expected to attend the gathering at the Vatican Feb. 21-24, 2019, to discuss “prevention of abuse of minors and vulnerable adults.”

The U.S. Bishops are scheduled to gather again for their annual June meeting. Plans for convening in March have yet to be announced.

The USCCB’s National Review Board Chairman Francesco Cesareo presented a report that calls for including bishops in the Charter on the Protection of Children and Young People; publishing complete lists of credibly accused clergy in all dioceses; improving the auditing process; and enhancing accountability for bishops regarding cases of abuse.

The report praised efforts that have addressed the problem of abuse by clergy but chastised the bishops for a lack of transparency. “Today, the faithful and the clergy do not trust many of you. They are angry and frustrated, no longer satisfied with words and even with prayer. They seek action that signals a cultural change from the leadership of the Church. Their distrust will remain until you truly embrace the principles of openness and transparency listed in the Charter. You must come to terms with the past. There cannot be reconciliation without full acknowledgement of the truth.”

The report also highlighted the problem of responsibility: “... as more information is publicized regarding the inappropriate handling of abuse by bishops, it remains clear that some bishops have escaped the consequences of their acts of omission regarding abuse, and that little is being done to address this injustice. While most of you have responded appropriately to allegations of abuse, according to a recent report by the Boston Globe and Philadelphia Inquirer, more than 130 bishops – or nearly one-third of those still living – have been accused during their careers of failing to respond to sexual misconduct in their dioceses. Others have been accused of committing abuse. Few have faced real consequences. This must change.”

As he closed the conference, Cardinal DiNardo expressed disappointment in delaying a vote, but said he was hopeful that the delay “will improve our responses to the crisis we face.” He addressed the need for action in his closing remarks.

“Brothers, you and the speakers we have heard from have given me direction and consensus. I will take it as a springboard for action.

“When the summer’s news first broke, we committed to three goals: to do what we could to get to the bottom of the Archbishop McCarrick situation; to make reporting of abuse and misconduct by bishops easier; and, to develop a means of holding ourselves accountable that was genuinely independent, duly authorized, and had substantial lay involvement.

Now, we are on course to accomplish these goals. That is the direction that you and the survivors of abuse across our country have given me for the February meeting in Rome. More than that, in the days prior to the meeting of episcopal conference presidents, the Task Force I established this week will convert that direction into specific action steps. Some of those actions steps include:

“We leave this place committed to taking the strongest possible actions at the earliest possible moment. We will do so in communion with the Universal Church. Moving forward in concert with the Church around the world will make the Church in the United States stronger, and will make the global Church stronger.”

The U.S. Bishops voted 241-3, with one abstention, to approve “Open Wide our Hearts: The Enduring Call to Love, A Pastoral Letter against Racism.” The letter, inspired by the words of the prophet Micah, calls Catholics to love in a way that makes “room for others in our hearts.”

It goes on to say: “Love compels each of us to resist racism courageously. It requires us to reach out generously to the victims of this evil, to assist the conversion needed in those who still harbor racism, and to begin to change policies and structures that allow racism to persist. Overcoming racism is a demand of justice, but because Christian love transcends justice, the end of racism will mean that our community will bear fruit beyond simply the fair treatment of all.”

“The entire body of bishops felt the need to address the topic of racism, once again, after witnessing the deterioration of the public discourse, and episodes of violence and animosity with racial and xenophobic overtones, that have re-emerged in American society in the last few years.”

By a voice vote, the U.S. Bishops expressed unanimous support for the advancement of the cause for sainthood for Servant of God Sister Thea Bowman, FSPA.

As a Franciscan Sister of Perpetual Adoration, teacher and scholar, Sister Thea exuded a joyous love for Christ and was a tireless voice for intercultural awareness and inclusion in the United States and around the world. Inspired by her teachers from the Franciscan Sisters of Perpetual Adoration and the Missionary Servants of the Most Holy Trinity, Sister Thea became Catholic at age 9, then became one of the most influential advocates for evangelization and inclusion of African Americans in the U.S. Church. Shortly before her death at age 52 from breast cancer, Sister Thea addressed the U.S. Bishops from her wheelchair, urging them to promote full participation of African Americans within Church leadership, schools and parishes.