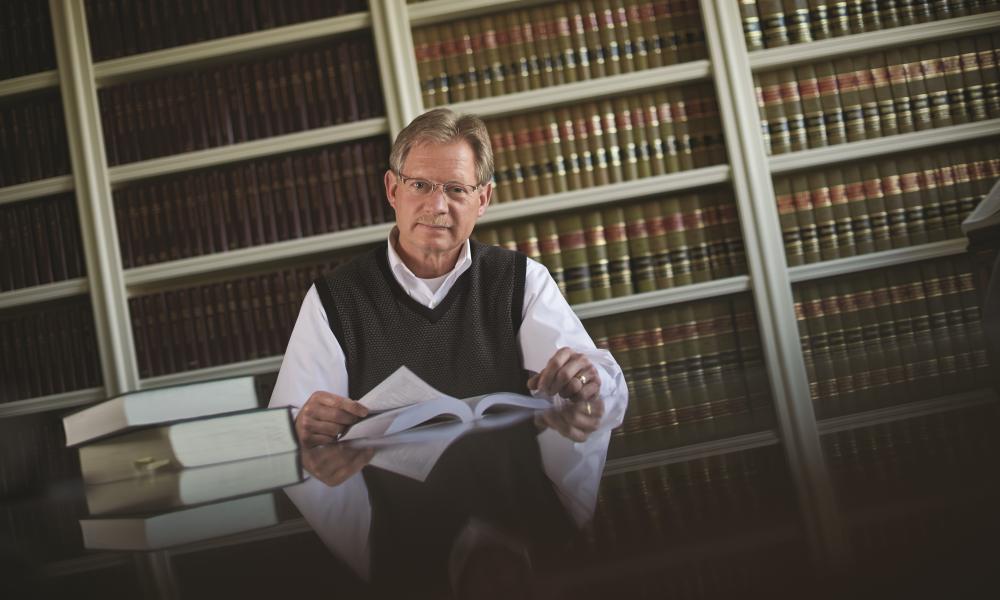 Faith and law: How Paul brings them together

If the World will not hear the Divines, They must hear the Lawyers, Who will teach them Manners.

The words are Martin Luther’s, and the quote is a favorite of Paul Brandenburg, judicial law clerk. Unlike Luther, Paul felt called to the legal profession. But looking back on more than 30 years as a lawyer, he explains that his path wasn’t always certain, his future not always easy to discern. “Lawyers contribute to conflict management through an adversarial process. I didn’t feel like much of a fighter. I hungered and thirsted for righteousness, but I saw myself as more of a peacemaker than a fighter. After all, I had chosen St. Dominic as my confirmation patron because, as a youth, he had made peace between fighting friends by holding up a crucifix.” Paul wondered – Was there a place for a peacemaking lawyer?

While a student at Cooley Law School, Paul joined the Christian Legal Society for regular prayer and Bible study, and various events integrating faith and law. And with a handful of other students, he began attending a local lawyers’ Bible study on Friday mornings. This is when Paul encountered those words of wisdom from Martin Luther, which he has remembered.

“Wow,” says Paul of this quote, “that puts things in perspective. The conflicts lawyers are asked to help manage almost always have spiritual and moral dimensions. Yet, operating in a secular legal system, lawyers are limited to using processes and procedures, or ‘manners,’ to manage symptoms of conflict rather than causes. Lawyers’ work is important, I realized, but just part of a bigger story.” Eventually, several of Paul’s Bible study companions became founding members of the Christian Conciliation Service of Central Michigan (CCS). It was a ministry designed to afford Christians a forum for resolving conflict without having to resort to litigation, or mere “manners.”

As Paul says, “We endeavored to embrace conflict as opportunity and use tools like prayer and forgiveness in the quest for peace. And what a joy it was to participate in mediation and conciliation efforts and witness God’s grace at work! There were challenges and frustrations, of course, but we also experienced God’s very real healing power when enabled by simple faith and trust. Maybe, I thought, there is a place for a peacemaking lawyer.”

After Paul graduated from law school, he received a call from Judge Robert Holmes Bell, with whom he had become acquainted on the CCS Board. Judge Bell offered him a position as a law clerk, and thus began – day by day, stretching into year by year – his 30-year career as a judicial law clerk. According to Paul, “I have been blessed to participate in the most formal, ‘last resort’ dispute resolution process, researching the law and facts and helping the judge discern the contours of justice under the law, and drafting opinions explaining the court’s rulings.  It’s a form of ‘peacemaking’ that agrees with me.”

Not long after Paul began his career as a law clerk, the Catholic Lawyers Guild of the Diocese of Lansing was re-activated. The purpose of the guild is as follows:

The Catholic Lawyers Guild sponsors a Spring Luncheon and the annual Red Mass for those who work in the legal profession. Paul’s favorite event is the annual retreat, which he has helped to organize for the past 25 years with the “Guild Pastor,” Father Charlie Irvin. Speaking of the retreats, Paul says, “It gives us a chance to be together, prayerful,” focusing on the spiritual needs of those working in a profession which, he says, is “increasingly godless.”

“It’s so important while doing battle, so to say, in a secular, pluralistic professional arena, to be spiritually grounded yourself. It’s important so you can be surrendered to God, open to his grace so that he can work through you in your professional endeavors. We bring our own faculties to bear but God wants to work with us in synergy. We have to trust him.”

Most of all, Paul says, the fellowship of Catholic lawyers he has experienced “is an anchor that keeps me grounded, helps me keep the perspective.”