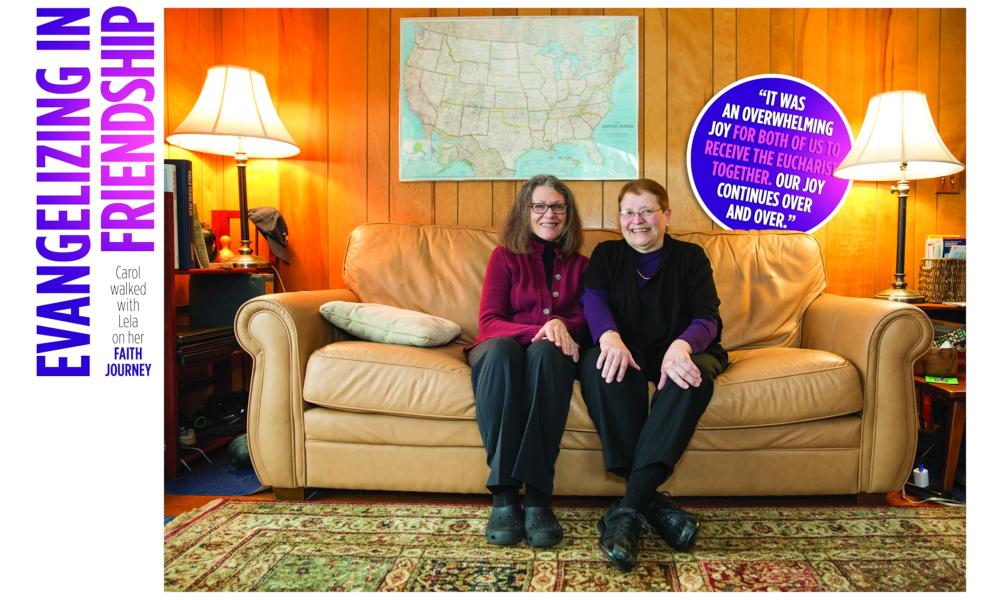 Carol Demshuk and Lela Vandenberg spoke at the diocesan assembly in Lansing in October 2016. They shared the story of Carol, a parishioner at St. James in Mason, accompanying Lela on her return to the Catholic Church. Carol followed the lead of the Holy Spirit in praying for Lela’s spiritual growth, in letting her love for Jesus in the Eucharist be her witness, in giving timely invitations to Mass and suggestions to look at Scripture – and in accompanying her through life as her friend and prayer partner.

Here is the dialogue Lela and Carol presented at the assembly.

Lela: I was raised in a good Catholic family and had 12 years of Catholic school. I went to college and, though I wanted to be a good person, I decided I didn’t need God anymore to help me. I was proud, independent and liberated. You can guess — it was the '60s.

Over time, I began to feel an emptiness inside, and kept up a futile search for ways to fill it. The last night of my three-year Peace Corps service in Rwanda (where I met and married my husband of almost 39 years), I stood under the stars and said, “God, if you’re real, I want to know you.”

We returned to the States and attended grad school at MSU. Through the witness of another grad student, I eventually became a Protestant, and, through the Holy Spirit and his grace, kept growing in my love for God.

Carol: We met each other in a prayer group with people of different Christian faiths. Over the years, our friendship grew. We prayed together, attended conferences and studied spiritual writings. Lela was so good to me. She helped me come to understand and accept the unconditional love that Jesus has for me. Our different faith backgrounds were never an issue for us.

Lela: One thing I really appreciated about Carol is that I never felt she was trying to convince me to become Catholic. If she had, in my pride, I know I would have backed away. She was just my spiritual friend. We simply knew God together.

I belonged to a Vineyard church (a charismatic, non-Pentecostal church). Even though Carol didn’t try to convince me to become Catholic, I really wanted her to join me at the Vineyard.

Carol: Lela mentioned that her pastor was preaching an interesting series and maybe I should come. I did, and I enjoyed being there. The sermons were excellent, but I felt an emptiness there. An essence was missing.

Lela: I said, “Carol, you obviously like it here, why don’t you just join?” And she said, “It’s the Eucharist, I could never leave the Eucharist.” That surprised me and got me pondering …

Carol: At one point, I said, “You might want to look at John 6,” and she did. That’s where Jesus says: “Unless you eat the flesh of the Son of Man and drink his blood, you do not have life within you … For my flesh is true food and my blood is true drink.” (53-55) She said, “I just don’t think I can believe that.” This is the crux of the miracle — it wasn’t me, it wasn’t her, it was God graciously working in her!

We were sharing life and sharing our mutual love of God. I knew she already loved God very much, and I respected who she was as a person of God. I really didn’t pray for her to be Catholic, but I did pray for God to keep drawing her closer.

Lela: Then, in 2013, we took a year-long ecumenical course called "Spiritual Foundations" at the Dominican Center in Grand Rapids. During that year, we read a lot about saints and mystics, and I also began having weekly spiritual conversations with my Catholic sister, Nancy Rowland. The next year, in 2014, Carol and I both began a two-year course in spiritual direction, which led us deeper into the saints and mysticism of the Catholic Church. I chose St. Thérèse of Lisieux as my special spiritual giant. I even began praying to her, something no good Protestant should do!

Carol: Silent retreats were required annually as part of our courses. We went together to one at the Augustine Center near Petoskey, and stopped at the Cross in the Woods at Indian River on our way home. We went into the gift shop and Lela bought a rosary. I was shocked! What is happening? I should have known …

Lela: I had started visiting churches and attending Mass at Carol’s invitation. I began longing for the Eucharist, but knew I couldn’t be Catholic if I couldn’t also love and accept Mary, so I thought I would try saying the rosary and see what might happen.

Carol: I noticed a shift happening toward Catholicism. Lela began to talk about her hunger for the Eucharist, and I suggested she talk to Father John Byers at Immaculate Heart of Mary in Lansing, a parish near her home that she had visited and liked a lot.

Lela: Father John was very helpful and answered a lot of my questions. But I then learned that I would need to get an annulment from a short marriage I’d had in my 20s. At first, I thought, “That’s it, I can’t do this and I love my Vineyard church anyway.” But, Father John had said he’d help me, so I went back and we did all the paperwork and submitted it just after Easter in 2015.

Carol: All during this process I was thinking, “She’s going for an annulment!” It was at this point that my prayer changed to hope and expectation. I could only say, “Your will be done, God.” Even then, I never applied any pressure or became like a cheerleader urging her on. I was just happy to witness God’s work in her. It was amazing.

Lela: In Holy Week of 2016, the annulment came through on Tuesday, and I received the sacrament of reconciliation. On Wednesday, I received the Eucharist and my marriage was blessed in matrimony! I had come home!

Carol: I had the great privilege of being a witness to her marriage vows. We attended the Good Friday service together and it was an overwhelming joy for both of us to receive the Eucharist together. Our joy continues over and over.

The diocesan assembly Called by Name was called by Bishop Earl Boyea to engage issues surrounding the return of non-practicing Catholics to the Church. Lela and Carol’s story illustrates the four pillars of evangelization: prayer, with the Holy Spirit as the principal agent in the process; witness, through example; invite, into everyday life and faith; and accompany, through every step of the way. Lela and Carol will be the first to say that being good friends and sharing life and faith in Jesus facilitated Lela’s return.