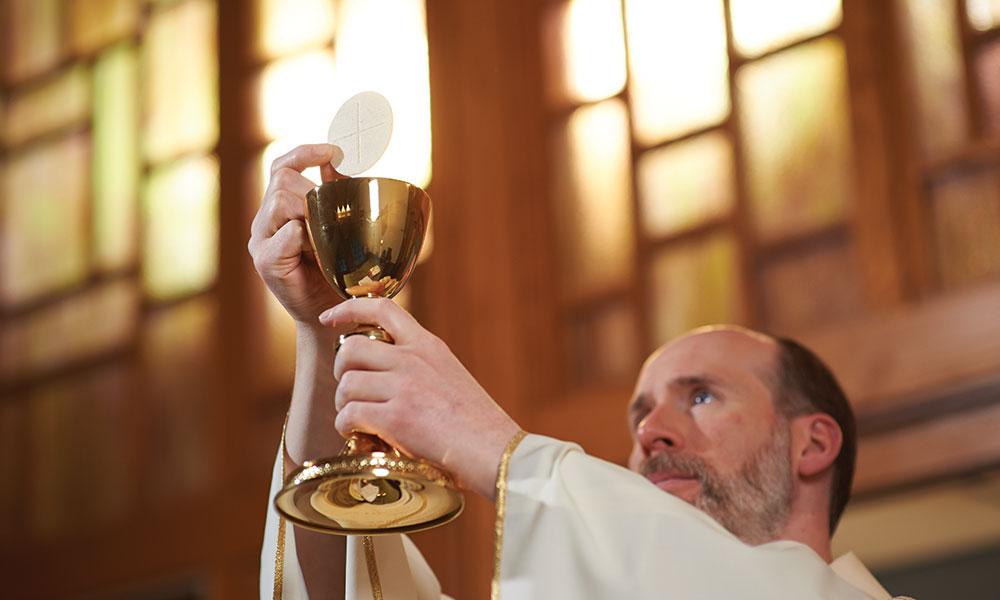 The Eucharist and the Kingdom of Heaven

If we hope to lead others to faith in Christ, there is simply no other way except by faithfully echoing the Word of God in both word and deed. Only the Word can awaken and bring forth the Word. God alone is both the source of the kingdom of heaven within us (created as we are in the image and likeness of God) and the One who brings this reign to fruition in our lives and in our world. This is the essence of the principle of “like for like.”

This means having the same mind, love, heart and thought as Christ, who is in perfect communion with the Father and the Spirit. We can do this, through the power of the Holy Spirit, by doing as Christ did, that is, by becoming obedient, even unto death. However, this means we must give up our own will to the will of the Father, just as Jesus did.

The first step to surrendering our will to the will of the Father is having a burning desire for the kingdom of God. The kingdom of God is a state of communion with God. It is the state that Jesus made present to his disciples during his earthly ministry. Each of the apostles was invited into a relationship of ever-deepening communion with Jesus that reached its climax at Pentecost when they received the Holy Spirit.

Each of these (yeast, buried treasure, a pearl that lies in the belly of an oyster, the wheat and the seed) is hidden from sight in the beginning but is bountiful and of immense value when it is revealed in full. Of course, the discovery of things that are hidden and the valuation of things that are small presuppose a strong desire to seek such things out and to act in the faith that great things lie within.

We also learn from the images given as likenesses to the reign of God that something must be done in order to facilitate the springing forth of this reign. The yeast must be kneaded into the dough; the buried treasure and fine pearl must be uncovered; and the seed must be planted. In other words, a decision to take action is required.

The decision to strive to discern the Father’s will in all that we do is a matter of honestly establishing the point from which we are beginning our discernment process. All too often, we articulate a desire for our life first from a “self” centered stance. We make choices that may lead us to greater wealth, notoriety or influence.

Intentionality with respect to discerning God’s will calls for an attentiveness and openness to the unpredictable – to the uncertain. It opens up creation to us in a way that is impossible to describe. Every relationship, every activity, every thought, every spoken word is brought into an awareness centered on God. However, it all starts with the conscious decision to act on our desire to make God’s will the criteria for our life’s direction.

The kingdom of God requires a total commitment on our part. We are to purge from our lives the weeds that separate and obscure our view of the good wheat. We must remember where our real treasure lies, and it’s not in this world.

The Gospels make this even clearer in the story of the rich young man, “If you wish to be perfect, go, sell what you have and give to the poor, and you will have treasure in heaven. Then come, follow me.” (Mt 19:21) One could also peruse the passages about the cost of discipleship found in Matthew 10:37-39 and Matthew 16:24-25.

Once a decision is made, it is necessary to give the decision time to produce fruit. The reign of God does not blossom instantly. It reveals itself over time. The seed produces first the blade, then the ear and finally the ripe wheat in the ear. (Mk 4:28)

Panic, doubt, apathy and reversal will cut the potential life of the decision at the root. If we have been intentional and prayerful, we need to resolve to trust the decision until it has had sufficient time to produce its fruit. It is only with a resolve that comes with the desire and the decision to choose, and choose every day, to discern and follow the Father’s will that we can share the experience of those first apostles in whom the “mind of Christ” had welled up through the power of the Holy Spirit to the point it was no longer they who lived but Christ through them.

THE EUCHARIST AND THE KINGDOM OF HEAVEN

According to the Catechism of the Catholic Church (1325-1331), the Eucharist is both the “efficacious sign” and the “sublime cause” of that communion with God for which we were made. The Eucharist is the efficacious sign and sublime cause of the kingdom of heaven. It is precisely through the eucharistic celebration that we unite ourselves to Christ and with the heavenly liturgy in anticipation of eternal life in communion with God. It is through this intimate union with Christ, as sharers in his body and blood, that we can most directly share the same mind, heart, love and thought of Christ.

Jesus said to them,“Amen, amen, I say to you, unless you eat the flesh of the Son of Man and drink his blood, you do not have life within you. Whoever eats my flesh and drinks my blood has eternal life, and I will raise him on the last day. For my flesh is true food, and my blood is true drink. Whoever eats my flesh and drinks my blood remains in me and I in him. Just as the living Father sent me and I have life because of the Father, so also the one who feeds on me will have life because of me. This is the bread that came down from heaven. Unlike your ancestors who ate and still died, whoever eats this bread will live forever.” (Jn 6:53-58)

How might this passage help us to understand the centrality of the Eucharist in living in communion with the Holy Trinity?