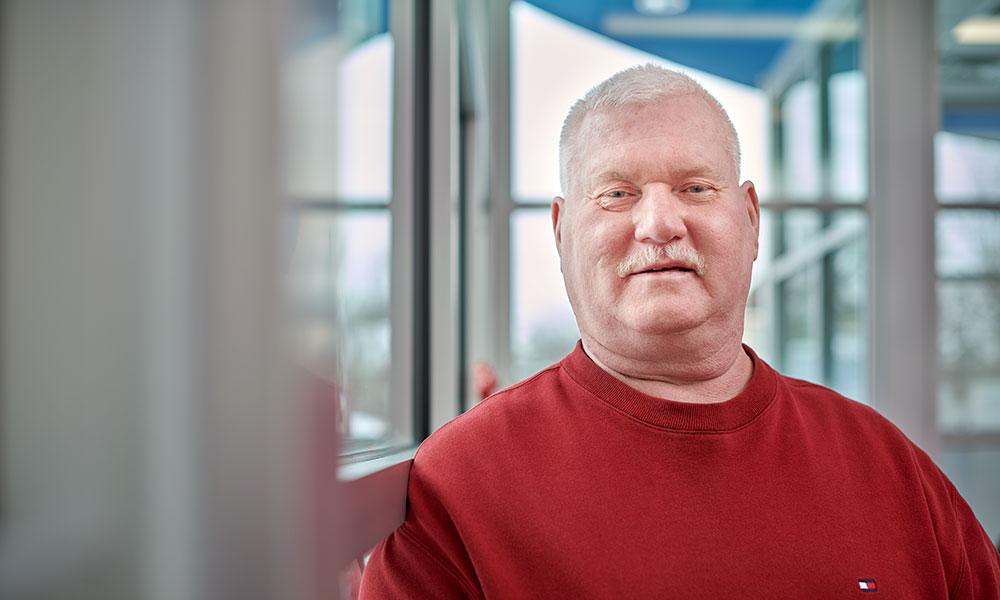 Scott Lenderman of Flint left prison alone and with only the clothes he was wearing. From the moment he connected with Catholic Charities of Shiawassee and Genesee Counties, Scott felt like he had people who cared about his success.

“Catholic Charities is amazing with what they supply you,” Scott says. “When you first come out of prison you have nothing.”

Catholic Charities in Flint is part of the Michigan Offender Success Model in partnership with Michigan Works, Michigan Rehabilitation Services and local employers and educational institutions. The goal is to help men and women leaving prison to successfully transition into the workforce and society.

Scott was determined to succeed and stand on his own, but he needed help and compassion to guide him through the process. Catholic Charities provided Scott with exactly the support he needed.

“I never had to depend on anybody before. I couldn’t do what I have done without the Lord putting these people in my life at the right time,” says Scott. “I don’t know where I would be without them. I really don’t.”

The spirit of Catholic Charities is exemplified in one of Scott’s first experiences with the organization. Living in a transitional house after his release from prison, Scott was required to finish all his tasks and be home by noon, which included walking and navigating bus schedules.

“This one morning a cold front came through. It started raining. I was freezing waiting for the bus,” Scott says. “I saw Catholic Charities. Dennis was standing in the foyer. He took me by the hand and got me a winter coat from their Community Closet. I have warm clothes thanks to this organization.” Community Closet resources such as clothing, household goods and personal needs items are funded in large part with DSA contributions.

Scott knew what he wanted to do for his new career – drive a truck. To reach that goal, he had to work hard and learn new skills.

The first step was to sign up for driving school. The three-week class on how to drive a semi-truck cost $4,300.

Scott didn’t have the money, but he knew the funds existed for him to take the class and get his commercial driver’s license (CDL). “It took a while,” he says about finding the funding for school. “I was determined to get it done. I did a lot of walking. At 60 with a bad knee, it wasn’t easy some days. All you have to do is look for the help and everyone down here has been extremely nice. They don’t look down on you or judge you.”

Once he secured the tuition for school, Scott signed up with Tri-Area Trucking School. He stayed focused through the class, knowing the CDL would change his life.

“You have to learn about 300 different things about the semi,” says Scott. “I was studying every night for three or four hours.”

After he passed the CDL test, Scott faced his next hurdle – sending out resumes for a job. “I knew nothing about computers at all,” he says. “I walked to the bus station and I was down here three to four hours a day putting in resumes. I had to turn down 30 to 40 jobs because I couldn’t go out of state. Now I have a great job,” says Scott. “It just worked out perfect. It’s a 45-minute round trip. That was the criteria I had to meet. The Lord somehow put it together.”

Scott admits he did not always trust in God. “I didn’t know the Lord until I went to prison,” he says. “I knew I needed someone to hold on to. I have studied the Bible. I know the Lord says if you do your part, he will do his part. He showed me miracles. If you pay attention a little bit you can see the miracles he does in your life. Now I look for those things. I see them all the time.”

The biggest miracles in Scott’s life have been the people who guided him and supported him along the way. “It’s amazing that all these people have been put in my life,” says Scott. “The way things fell into line, every time. There’s only one reason – that God is working in my life.”

For 14 months, Scott has been driving his route and hasn’t missed a day, and he has an apartment to come home to every night. From providing work clothes and outfitting his apartment to connecting with the right people, Catholic Charities was there to support Scott every step of the way, thanks in part to DSA funding.

His mistakes in life cost him dearly, but without those mistakes, Scott wouldn’t know God’s love. “It’s just amazing,” he says. “I’m so grateful for what I have. I want people to know God works in your life. I lost everything, but I see the Lord now.”