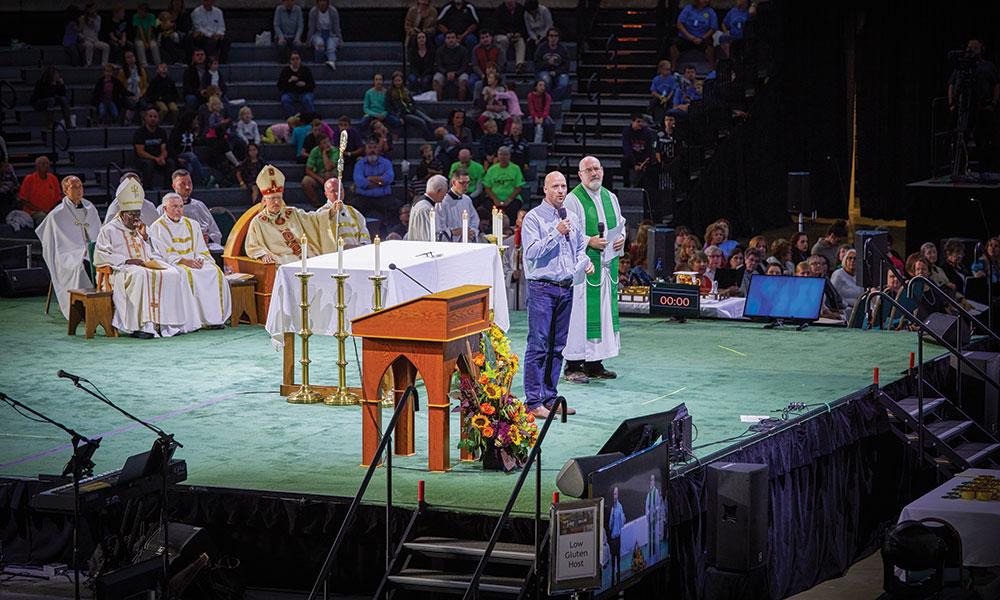 A term such as “never before” does not deter Craig Pohl, diocesan director of new evangelization, in being a visionary. Case in point: the diocesan-wide Made for Happiness Assembly held last fall: “In the history of our diocese, we had never done anything on this scale. We had never done a eucharistic procession in downtown Lansing, let alone a four-mile one. Were we dreaming too big to hold it in the Breslin Center? How many people would stay for an all-day event? Would we encounter protestors during the public procession? The idea was so foreign, people were telling us our plan was crazy.”

All the angst dissolved when the anticipated 10,000 participants swelled to 15,000, and the four-mile procession was peaceful and joyful. “We were pleasantly surprised with how the day came out. People just rose to the occasion. Our identity in Jesus Christ came across extremely clear at this conference. We came to realize one of the greatest successes of this event was just getting everybody in the diocese together for the purpose of celebrating Jesus as our core and focusing on our mission.”

The Made for Happiness Assembly was the final of three gatherings focusing on discipleship and evangelization resulting from Bishop Boyea’s pastoral letter, Go and Announce the Gospel of the Lord. However, as Craig points out, these assemblies are the beginning, not the culmination, of an ongoing effort to renew and re-energize Catholics: “We affected a culture shift. Our clergy, lay ministers and the faithful know with utmost certainty we are heading in a very distinct direction of training disciples and reaching out to those separated from the Church. This last gathering was not just a visual sign that we follow Jesus, but also a moment to renew and re-center ourselves on who we really are.”

Craig acknowledges this assembly could not have happened without the assistance of DSA funding, dollars that accrue because of faithful Catholics who support the local Church’s efforts by tithing to the yearly appeal. “In essence, Catholic contributors footed the majority of the bill and enabled us to offer this great assembly free of charge,” Craig says.

Prior to the assembly, Craig worked closely with Ava Maria radio, based in Ann Arbor, to air the entire day live so homebound Catholics could participate. Word of this massive undertaking eventually piqued the interest of the national TV network, EWTN (Eternal Word Television Network), which is producing a video to share globally. The one-hour program, narrated by Bishop Boyea, shares the impetus, design, themes and theory behind the assembly’s execution. As the bishop speaks, footage from the Made for Happiness Assembly plays in the background. Video from each speaker is included.

“The airing of our assembly by EWTN will help the wider Church see the great benefit in gathering people from their dioceses to re-center the mission of their local Churches on Christ. With the climate impacted by scandals in and around the Church, this type of event can help return us to our foundation. More than anything, it inspires people to keep taking steps forward in the new evangelization.”

The fruits produced by the assembly are a catalyst for forward thinking. Parish ministers are finding a stronger link with the parishioners who attended. Clergy and lay ministers are dreaming bigger in terms of how they can do evangelization. The day’s energy created a spark of creativity that lingers in the hearts of the lay people. Participants discovered new ministries during the assembly, and report they are regularly reading the little pocket Bible they were given free of charge. Craig says that not a week goes by without someone commenting on how an experience at the assembly still engages them.

The radiant spirit of joy and happiness was experienced by those present. It permeated the day. “This was the work of the Holy Spirit, not something we could fabricate. People told me how impressed they were with what a happy day it was. The 700 assembly volunteers were instructed that their biggest job, next to praying for the success of the day, was to smile. We wanted to link very closely with the theme of the assembly, Made for Happiness. By conveying to people how happy we were that they were there, the feeling became contagious. It was simply thrilling to watch faith-filled happiness in Christ snowball.”

Details about the upcoming EWTN special are not yet available. When they are known, the information will be posted on dioceseoflansing.org or in the magazine if time permits.