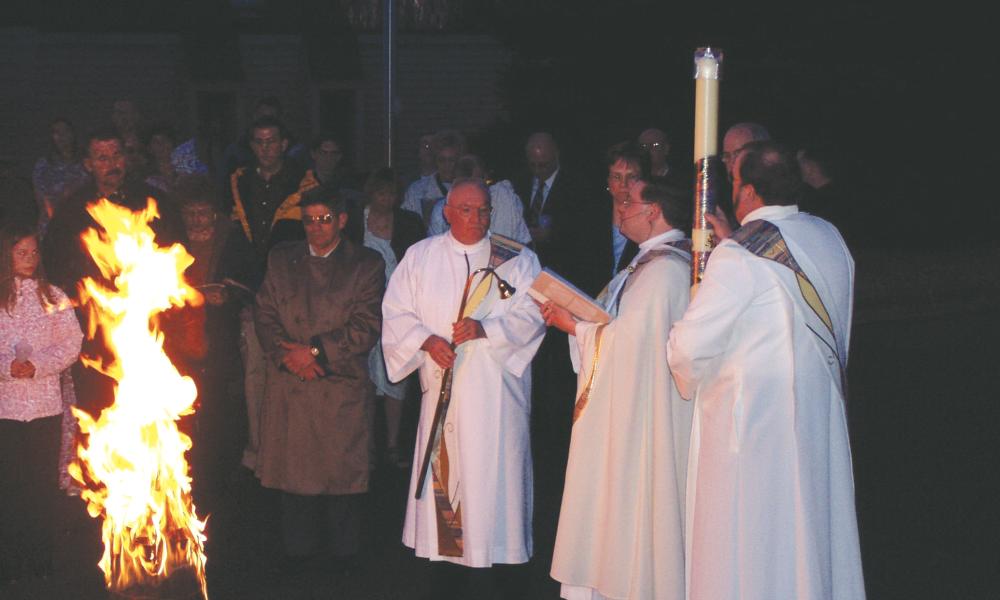 A different way to track time – the liturgical year

We live by our schedules. We check the clock, consult our electronic datebooks, and record important events on the refrigerator calendar. We celebrate birthdays, anniversaries and holidays with family rituals and increased festivity.

Similarly, the church has developed, over many centuries, a liturgical calendar. But this is not merely based on chronology. It acknowledges sacred time (kairos) – a time filled with meaning, always lived in relationship with God.

Central to that relationship and to all our liturgies is the paschal mystery – the incarnation, passion, death, and resurrection of Jesus – and our participation in it. We recall the past, seeing all of salvation history in relation to Christ’s redemptive act. And in that remembering, we make that redemptive act present (anamnesis) – we realize how Christ continues to redeem us here and now. Finally, we look forward to the time when we shall see God face to face in the fullness of the kingdom.

It takes a whole year to even begin to explore all the facets of so great a mystery, so the church has carefully arranged seasons, weeks, days and even hours that help us to do so. Early Christians celebrated Jesus’ resurrection every Sunday. They would gather on the day of the resurrection, read from the memoirs of the apostles, give thanks to the best of their ability and share a meal of bread and wine.

We still do that! Easter is still the high point of our year and our week. We still gather faithfully every Sunday – the day of the resurrection, the first day of creation, the day of the Holy Spirit’s descent, the Lord’s Day.

The Easter triduum is still the culmination of the entire year, the days around which all other days are arranged. The word “triduum” means “three days” and these are Good Friday, Holy Saturday and Easter, including its great Vigil. Good Friday begins with its own vigil; on Holy Thursday evening we celebrate the Mass of the Lord’s Supper. On Friday, we recall Christ’s passion and death. Easter Vigil, which commemorates the holy night when Christ rose from the dead, ranks as the “mother of all vigils.” (General Norms for the Liturgical Year and the Calendar, 21) Our celebration of his resurrection continues on Sunday morning and the triduum concludes on Sunday evening with Easter Vespers. Actually, we may go home and return to church again, but we are celebrating one long liturgy over 72 hours.

The Easter triduum is followed by 50 days of rejoicing. The Easter season begins with a sacred octave – eight days that are celebrated as solemnities. Forty days after Easter, the church marks the Ascension of the Lord. In all but six dioceses in the United States, this solemnity has been moved to the Seventh Sunday of Easter so that more people can observe it. The season concludes on Pentecost Sunday, when we celebrate the descent of the Holy Spirit. Originally, Pentecost was a Jewish observance of the giving of the law to Moses; it was celebrated 50 days after Passover. (That is why people of every nation were in Jerusalem when Peter threw open the doors and preached the good news. Despite the many languages they spoke, they understood him and came to believe.)

We prepare for the sacred triduum in a season we call Lent (from the Middle English word for “lengthen”). This season has two natures – baptismal and penitential. It is an intense period of preparation for our elect as they near the Easter sacraments and it serves as a baptismal retreat for those already baptized. This season begins on Ash Wednesday and concludes on Holy Thursday afternoon.

Next to the triduum, the Nativity of the Lord holds the most sacred place on the liturgical calendar. Christmas first appeared as a separate observance in the fourth century. Roman Christians may have Christianized a pagan feast of the winter solstice; modern liturgical historians, however, think that this date was chosen by calculating that Jesus was conceived on the same day as his death (approximately March 25). Following an ancient Roman custom, there are four distinct Masses on Christmas – Vigil, Midnight, Dawn and During the Day. The Christmas season also recalls other early manifestations of Christ’s divinity, such as the preaching in the temple, the Epiphany, and Jesus’ baptism in the River Jordan. Christmas, too, has an octave that concludes with the solemnity of Mary, Mother of God (Theotokos – God Bearer).

The largest of our seasons, of course, is Ordinary Time, but there is nothing “ordinary” about it! The word actually comes from the word “ordinal” or “counted” time.  In these weeks, we do not focus on a specific aspect of the paschal mystery, but on the entirety of Christ’s earthly life, his miracles and his revelation of God’s kingdom.

Which calendar guides our life? Is it the school year? Retail sales? The fiscal year? Sport seasons? Let us resolve to enter more deeply into the Liturgical Year. Let us pray for the grace to participate more fully in the paschal mystery, and to more deeply relate our own sufferings and joys, dying and rising, to the life of Christ.

“The splendor of the rose and the whiteness of the lily do not rob the little violet of its scent nor the daisy of its simple charm. If every tiny flower wanted to be a rose, spring would lose its loveliness.”

A: St. Therese of Lisieux

Better known as the Little Flower of Jesus, St. Therese is the doctor ofconfidence and missionaries. She entered the Carmelite Convent at 15 where two of her sisters had preceded her. In Therese’s memoir, Story of a Soul, she explains her “little way” to holiness. This “little way” consists not of extraordinary sacrifices but of the monotony of little acts offered to God through love. Her memoirs were published in more than 60 languages and she quickly became known and venerated throughout the world.

She is patron saint of aviators, florists, France and foreign missions.

Pilgrimage destination of the month: Glendalough and Knock, Ireland

Glendalough (from the Irish, Gleann Dá Loch, meaning “Glen of Two Lakes”) is a glacial valley located in County Wicklow, Ireland. It is most noted for its early medieval monastic settlement founded by St. Kevin, a hermit priest, in the sixth century. The valley, as known as the “City of Seven Churches,” was part of Ireland’s Golden Age. The settlement, however, was destroyed in the late 14th century by English troops.

At its peak, the monastery included workshops, areas designated for the composition and copying of manuscripts, guesthouses, an infirmary, farm buildings and dwellings for both monks and a lay population. The site attracts more than 1 million pilgrims per year.

Knock (from the Irish, An Cnoc, meaning “The Hill”) is a small town in County Mayo, Ireland, that received international attention after a series of apparitions of the Virgin Mary, St. Joseph, and St. John the Evangelist in 1879. Following the Catholic Church’s declaration that the visions were trustworthy, pilgrims have flocked to the Knock Shrine including Pope John Paul II in 1979 and Mother Teresa in 1993. Today, more than 1.5 million pilgrims annually visit the shrine, which has become western Ireland’s most popular attraction.