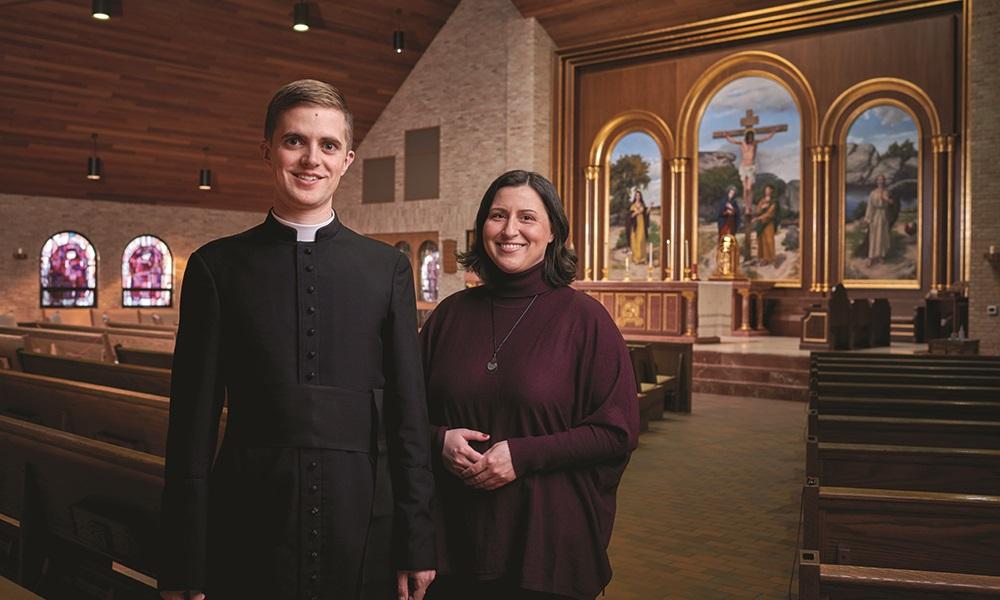 It wasn't a normal parish staff training event, and not just because of the COVID-19 protocols – chairs spaced apart and everyone in masks – something special took place at the Deployed for Mission conference in October among the staff members of St. Mary Parish. Those who attended said it fundamentally changed how they work together and how they hope to serve their parish.

Father David Fons, parochial administrator of St. Mary, and Christy Whiting, director of discipleship and evangelization, were part of a group of five employees from the Williamston parish that attended the conference in October 2020. Because of DSA funding, the conference was provided at no cost to parish teams from across the diocese.

Led by Father John Riccardo and his Acts XXIX ministry, the conference was designed to provide parish leaders and pastoral staff with ideas for how to “revive and refocus our mission of bringing people to Christ,” says Christy. “That was our hope in going, and we were not disappointed.”

Christy has served at St. Mary for just over two years, and described the community of about 600 families as close-knit. Father David took over as parochial administrator at St. Mary recently, in the summer of 2020.

During the conference, Father John Riccardo gave presentations on the kerygma – the story of salvation through Jesus Christ – and encouraged the priests and deacons in attendance to focus on its four main points in homilies during Advent. Father David followed this advice, and says, “I really enjoyed doing that. I found it helpful and life-giving.”

Christy says the explanation of the kerygma was life-giving for the parish, too, and that parishioners wanted to hear Father John’s talks on their own and go deeper in their learning about the topic, all because of the inspiration generated by the St. Mary team from the Deployed for Mission event.

Some of the most important parts of the conference in October, according to Father David, were the times set aside for eucharistic adoration: “One of his main points was that, as a staff, we’re meant to go to the Lord before, during and after our decision-making processes. The operational stuff needs to be begun and ended with the Lord in times of prayer.”

Christy especially appreciated the emphasis on beginning everything with listening to the Lord and praying throughout for continued guidance.

“So often, we think we have to come up with our own plans and programs for how to minister to people,” she says. “God already knows how to reach hearts. It’s our job to listen to his direction and follow him.”

Since the event, the St. Mary staff has begun participating in 30 minutes of eucharistic adoration together each week, with discussion afterward about where they feel the Lord is leading them as a team. “It’s been very fruitful and helpful in guiding us,” Christy says. “It’s knit us together more closely as a team.”

Before one of the periods of adoration at the Deployed for Mission conference, Father John gave conference attendees two questions to take to prayer: First, what is your parish’s greatest wound or area of pain? And second, what ground does God want to claim in the “mission field” of the parish?

Christy says that when the St. Mary group gathered after that period of prayer, all five of them revealed the word that they were led to meditate on: loneliness. “The word loneliness came to all of us in some form or another,” she says.

The team was amazed, and then realized they knew exactly what they should focus on with regard to their parish and its needs, particularly in the time of COVID-19. “This gave us an impetus to reach out more,” Christy says. “It sped up the development of a home outreach ministry that we’re creating, and we're looking at many more ways we can connect with people and accompany them.”

The conference focus on the Eucharist also inspired the team to make the Eucharist even more accessible to St. Mary parishioners, through live-streamed adoration and the training of more extraordinary ministers of holy Communion to take the sacrament to those who are homebound or cautious about attending in-person Mass. The parish team has also started staff meetings with prayer as a foundation.

Father David is grateful he had the opportunity to attend the Deployed for Mission event. “I found it very encouraging and helpful to get to know my own staff better, and to help with our needs,” he says. “We now have a shared vision and shared goals as a staff.”

Christy agrees, adding that it was inspiring to look around the room at the event and see 200 parish staff from across the diocese all pursuing the same mission. Additionally, she is grateful that the event allowed parish employees to hear and learn from Father John Riccardo, whom they may not be able to bring to their own parishes. The DSA, she said, made it possible for many more people to be equipped and empowered to serve.

“God is working through us, and we’re looking for his guidance and empowerment,” she says. “God knows how to get us through this time. He’ll give us his guidance.”