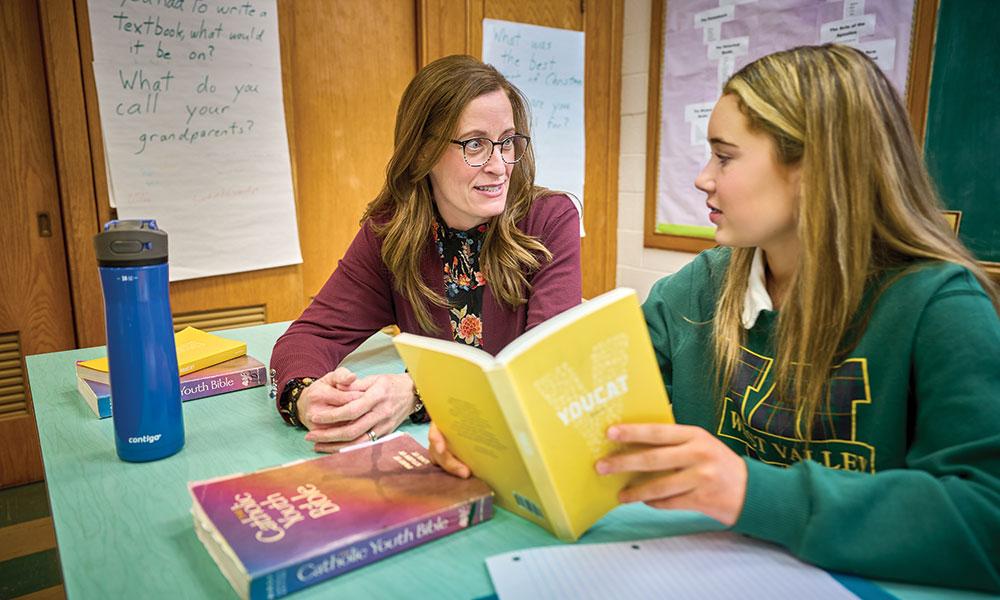 As director of religious education (DRE) at St. Therese Parish in Lansing, Stephanie Smith divides her role into three practical categories: communication, organization and connection. With 20 years’ experience as a teacher, Stephanie juggles all these aspects, but the third – connection – has driven her priorities in a crucial way, whether suddenly adjusting to remote learning in 2020 or navigating families’ varying needs as the world emerges from the pandemic.

Stephanie was in her second year as DRE when COVID shut down activities.

“My biggest goal in that moment was to stay connected with my families, and for them to let their faith see them through what was a very scary time,” she says. She began with daily communications, “anything I could think of to connect them with what would’ve been happening in the parish.”

Seeing how remote learning was panning out with her own children, Stephanie also made the decision to add as little screen time as possible for her families at home. She began offering lessons from the Virtues in Practice curriculum, put out by the Dominican Sisters of St. Cecelia, and suggested supplemental activities such as songs with movement, family prayer time and walks.

“My goal was to get them away from the screen as much as possible and look for connections to their faith in other ways – in nature, or with their families,” Stephanie says.

She also focused on what she knew would be a future challenge: welcoming them back.

“It didn’t take much to see that this could be something that could lose people permanently – because habits are habits,” she says. “You just want so much to try to keep a connection so that when they’re ready, they can come back.”

Maintaining that connection required flexibility and an openness “to meet families right where they were, without passing judgment about what people were comfortable with, but to just find out what they needed, what they wanted and a way to get that to them.

“As a teacher, I wanted them to come back in person, but I also respected their choices,” she adds. For various reasons, some families continue to receive religious education at home, and Stephanie is happy to offer her now-streamlined remote learning option.

She also praises her volunteer catechists’ dedication to fostering that connection: “Without them, I have no program,” Stephanie says. “My catechists are the ones who do this; I just keep it all organized.”

Their eagerness to serve is reflective of the parish’s spirit: “I’ve never had to beg for volunteers,” she says.

The importance of connection extends beyond Stephanie’s relationship with students and families.

“When I first started, the most important meeting I did monthly was with the Lansing-area DRE group,” she says. “I just came and listened and would always learn. I’d ask questions and got so many ideas.”

Those informal meetings produced a wealth of advice and knowledge as Stephanie navigated her new tasks, whether planning St. Therese’s semiannual “Family Hours” – fun, family-friendly events grounded in prayer, catechesis and hands on activities – or running sacramental prep and other K-8 religious education classes. (Stephanie terms them “RED groups,” for “religious education discipleship,” to emphasize that their aim isn’t solely to teach facts about the faith, but to model and encourage a life of living it.)

“This job is so eclectic – you have many irons in the fire, and [the other DREs] helped me figure out what I was doing that year,” she says. COVID took that collaboration to another level, as the group shifted to virtual meetings led by Tim Carpenter, the diocese’s director of catechesis. It was those meetings that led Stephanie to discover the Virtues in Practice program that became the cornerstone of her remote learning option.

“We’d share: What is working? What have we tried? And we would just brainstorm,” Stephanie says. Always, the driving theme was how to stay connected. “That was something that really got me through COVID.” The resources and support provided by Tim Carpenter through the Department of Evangelization and Catechesis is funded through DSA contributions.

Stephanie is clear about the impact of diocesan direction on her ability to serve the St. Therese community well. “The biggest way the DSA supports my position is through the support of the Office of Catechesis. That’s Tim, that’s my network” she says. “I can’t stress enough how much I rely on [them].”

She continues: “I think it could be possible in a job like this, in another diocese, to feel very disconnected from the diocese and your peer group. Tim and his office are our connection to each other, which helps us do our job better. So when DSA dollars support the work of the Office of Catechesis, they directly support what I do because of that connection it offers me and all the other DREs who take advantage of it.”

Coming full circle, Stephanie emphasizes that the St. Therese offerings born out of this support are family programs, meant to engage both children and their parents, grandparents, or even godparents who attend with them – and nourishing community in the process.

“We’re learning along with the kids. We’re all engaging, sharing stories, sharing our faith, opening up in prayer,” Stephanie says. “If we can pray together, in any capacity, that’s where that connection comes from.”

The Office of Catechesis assists Bishop Boyea in his role as chief catechist to bring all people in the Diocese of Lansing to Jesus. The office supports pastors and directors of religious education (DREs) to help them succeed in this mission. DREs lead the religious formation programs for children and youth in a parish. But their work would be impossible without the vital contribution of volunteer catechists, who teach the faith to young people following the curriculum established by the diocese.

WHAT IS A CATECHIST?

A catechist in the Diocese of Lansing is one who has a personal relationship with Jesus Christ. They have the desire to teach and respond to a call from God to participate in the Church’s mission to lead and encourage others to the same. The catechist will foster that relationship through:

The Diocese of Lansing provides formation for certification as a catechist. The first step in this process is to attend a retreat called Kerygma Encounter.