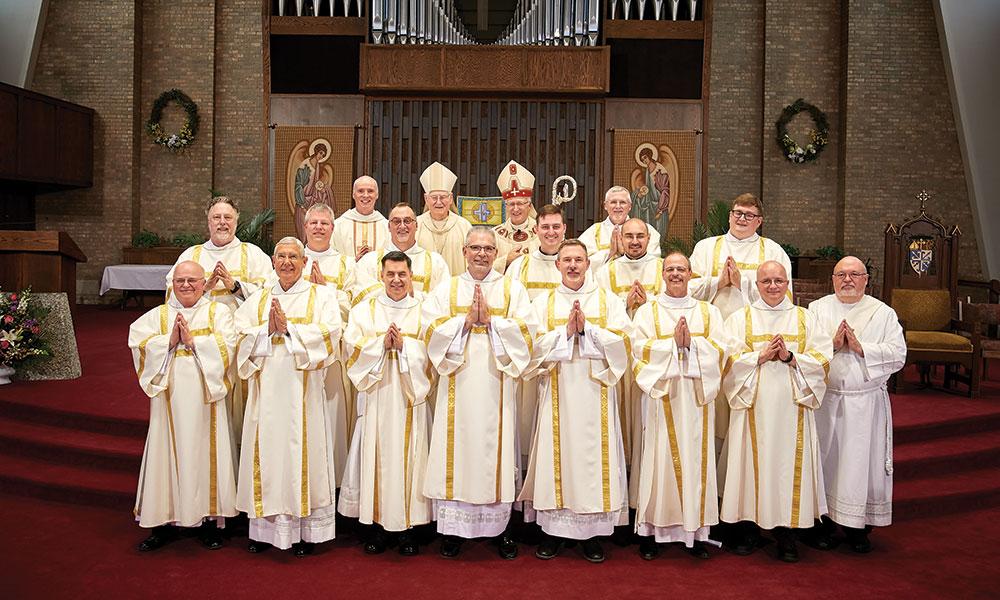 Deacon Eric and his wife, Mary Beth, have been blessed with five children and 10 grandchildren. They have been members of St. Joseph Parish in St. Johns for 26 years. Eric and Mary Beth are retired from full-time jobs, but do some contract work. They have served in many parish roles, and are currently most active in eucharistic and pro-life ministries.

Deacon Phil and his wife, Kathleen, have been married for 43 years. He started working for the Michigan Chamber of Commerce in 1974 and retired in 2018. His wife, Kathie, is a teacher. They are active members of St. Gerard Parish in Lansing and have one child in heaven, four adult children on earth and one granddaughter.

Deacon Pete and his wife, Connie, have been married for 36 years and are blessed with three children and nine grandchildren. They are founding members of Christ the King in Ann Arbor. Since retiring as a GM engineer, Deacon Pete has been active in hospital ministry and Unbound Prayer, and has served as Alpha coordinator at Christ the King.

Deacon Bob and his wife, Lynna, have two children and two granddaughters. They are members of the Catholic Community of St. Jude for the past 19 years where Lynna sings in the choir and Deacon Bob trains lectors, among other duties. Deacon Bob is the general manager for GC Services LP, a call center company providing services to the State of Michigan. He has mentored at St. Vincent Catholic Charities, brings Eucharist to patients at McLaren Hospital and is active in jail ministry.

Deacon Gordon is 62 years old, and attends St. John the Baptist Church in Ypsilanti. He’s been married to Kimberly for 37 years and has 27-year-old twin girls, Alexandra (married to Holt) and Suzannah. Gordon is a psychotherapist, and looks forward to preaching, marriage ministry, adult faith formation and developing other needed social ministries in the parish.

Deacon Rich, a long time member of St. John the Evangelist Parish in Fenton, cares for his sister Regina, who was injured in an auto accident in 1996, and is also fully employed as an inventor in the fields of electronic and mechanical engineering. He shares his love for the Catholic Church by teaching children and adults, and by ministering to the sick.

Deacon Rob and his wife, Sue, have been married for 40 years this December. They have three children, Father Anthony Strouse, Amanda Surdenik (Dan) and Allison (Tom) Spoonster, along with two granddaughters, Evelyn and Adelaide Surdenik. Robert has been the operations manager at the Catholic Community of St. Jude for 13 years, and is currently assuming the duties of pastoral associate. Robert, a convert to Catholicism, serves in several liturgical ministries at St. Jude along with coordinating Christian Service Outreach.

Deacon Kevin and his wife, Jackie, have been married for more than 38 years and are blessed with three children and six grandchildren. They are parishioners at St. Mary Church in Pinckney where Jackie leads a parish prayer shawl ministry and Deacon Kevin serves as RCIA director, leads baptism preparation and chairs the worship commission.

Deacon Sean and his wife, Elisa (Ely), have been blessed with four children. Sean is the chair of the theology department at Powers Catholic High School in Flint and the chief of staff for the Catholic Community of Flint. He will continue his ministry in for both after ordination.

On the path to priestly ordination: Transitional Deacons

Deacons John and Michael will be ordained to the priesthood on June 13, 2020, at St. Mary Cathedral.

Deacon John is the son of Bob and Kathy Vinton, and he has a younger sister and brother. He is from Holy Spirit Parish in Brighton. Deacon John attended Spiritus Sanctus Academy in Ann Arbor and Detroit Catholic Central High School. He has graduated from St. John Vianney Seminary in Minnesota and is currently studying for his master’s degree at Sacred Heart Major Seminary. He will be assigned as a deacon to St. Robert Bellarmine, Flushing.

Deacon Michael was born in the Ann Arbor area, and raised in a Lutheran home with his two siblings. After being received into the Church while a student at Eastern Michigan University, he made St. Francis of Assisi in Ann Arbor his home parish. He has just completed his fifth year of seminary at Sacred Heart Major Seminary. Deacon Michael will be assigned as a deacon to St. Mary, Pinckney.