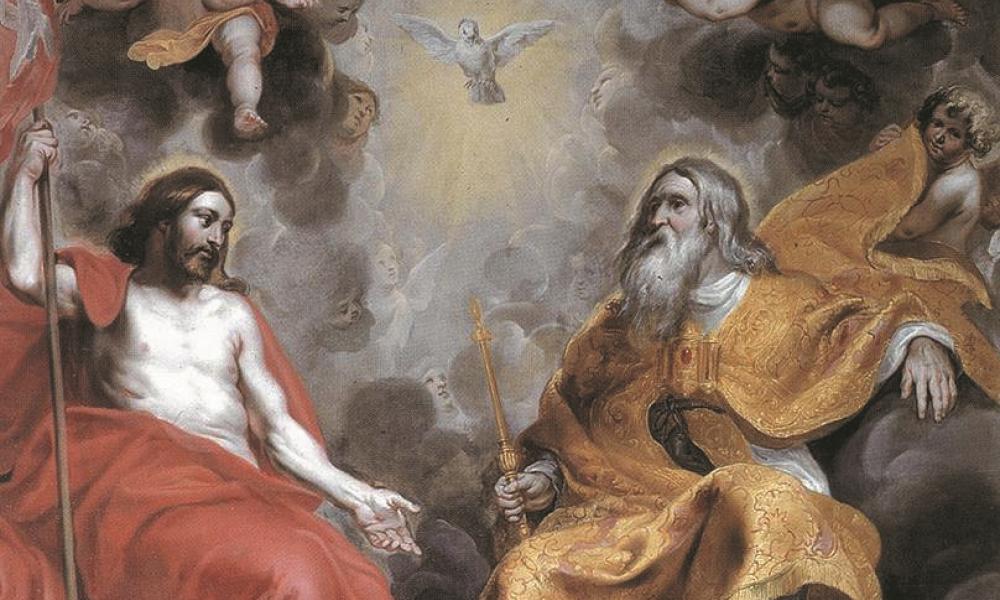 The creed Part 2: Why we believe in one God maker of heaven and earth?

Why we believe in one God maker of heaven and earth…

A little boy in a third grade faith formation session was intently drawing a picture. His catechist leaned over and asked him what he was doing. The small boy replied that he was drawing a picture of God. Gently the catechist told him that no one knows what God ‘looks’ like. Innocently and confidently the budding artist replied, “They will when I’m done.”

The mystery of God! We use words, symbols, definitions, pictures, and dogmas. Yet, ultimately God is a mystery. “Even when he reveals himself, God remains a mystery beyond words.” (CCC 230) The author Rudolph Otto said, “If the human mind could fully explain God, then God would cease to exist.”

We believe in one God, the Father…

Jesus called God Father, ‘Abba,’ a loving parent image to stress the intimacy of God with humanity. When we call God Father, we are using the language of faith. In Scripture God is also referred to in feminine images, such as mother. In Isaiah 66:13, God says, “As a mother comforts her son, so will I comfort you.” The Catechism of the Catholic Church reminds us, “God transcends the distinction between the sexes. He is neither man nor woman. He is God.” (CCC 239)

The word almighty occurs fifty-six times in Scripture. It is used only for God. The literal meaning of the word translated ‘almighty’ in the New Testament is “the One who has His hand on everything.”

Maker of heaven and earth, of all that is seen and unseen…

St. Thomas Aquinas said, “God has given us two books of revelation. One is nature.  The other is Scripture. We need to learn to read them both to understand the greatness of God.”

Many of us have learned about God from homilies, catechisms, religious education and Scripture classes. Do we take as much time to read the book of creation to see what it tells us about our marvelous God? The poet Gerard Manley Hopkins reminded us: “The world is charged with the grandeur of God.”

At one point in our history, humans believed that all creation was theirs to have dominion over. In 1980 the U.S. Bishops of the heartland published a statement, Strangers and Guests, which called us to stewardship, based on the 25th chapter of the Book of Leviticus. Today many theologians are challenging us to look at the model of companionship which is modeled in Genesis 2.

Stewardship can imply that God began creation and then handed over its care to humanity, so much so that humans move to center stage in the drama of creation. Companionship keeps the relationship of God and humanity in proper balance. Companionship also sees the inherent goodness in all creation rather than the belief that some parts of creation are objects to be used by other creatures. The common good rather than individualism is the focal point of our actions and decisions.

Perhaps the most important reality about our belief and relationship with God is summed up in this story. A singing contest was held at a small parish church. One of the best trained operatic singers entered the competition. He sang a rendition of the Our Father which was flawless. No one else wanted to compete against him, but finally a nervous older gentleman of the parish was persuaded to try. As he began to sing, few could hear him. He faltered. Then slowly he found the strength to pour himself into it. His performance was far from technically perfect, but every heart was touched. When the judges awarded him the prize, the operatic singer contested, “Why him? Why not me? Wasn’t I brilliant?” They answered: “You knew the song. He knew the Father.”

“God alone can make it known to us by revealing himself as Father, Son and Holy Spirit.” (CCC 261)

“The Trinity is One. We do not confess three Gods, but one God in three persons, the ‘consubstantial Trinity.’” (CCC 253)

“God’s very being is love. By sending his only Son and the Spirit of Love in the fullness of time, God has revealed His innermost secret: God Himself is an eternal exchange of love – Father Son and Holy Spirit – and He has destined us to share in that exchange.” (CCC 221)

To explain creation, scientists speak of evolution. Evolution is a scientific theory which states that higher forms of life evolved from lower ones. When Catholics talk about evolution, they are referring only to the body, never to the soul. Science, however, is not concerned with the study of the soul. Science leaves that to religion and theology. The Church teaches that God creates each soul directly and immediately. For Catholics there is no clash or conflict between

Church teachings and what science tells us about evolution. Both are meant to bring us the truth, and the truth is one. Thus Catholics may accept the theory that the human body evolved.

1 God’s almighty power is in no way arbitrary: “In God, power essence, will, intellect, wisdom, and justice are all identical. Nothing therefore can be in God’s power which could not be in his just will or his wise intellect.” (CCC 270, cf. St. Thomas Aquinas)

2 Evolution vs. Creation: There is no conflict between the two according to Pope John Paul II who said, “new knowledge has led to the recognition of more than one hypothesis in the theory of evolution.”

3 God alone created the universe freely, directly, and without any help. (CCC 317)

4 God is infinitely greater than all His works. But because He is the free and sovereign Creator, the first cause of all that exists, God is present to His creatures’ inmost being: “In him we live and move and have our being.” (CCC 300)

5 The universe has a just-right gravitational force. If it were large, the stars would be too hot and burn up too quickly and too unevenly to support life. If it were smaller, the stars would remain so cool, nuclear fusion would never ignite, and there would be no heat and light. The universe has a just-right average distance between stars. If it were larger, the heavy element density would be too thin for rocky planets to form, and there would only be gaseous planets. If it were smaller, planetary orbits would become destabilized. Could all this happen by accident? Not a chance! There is a God, the maker of heaven and earth.

6 There are Limits to Reason: Saint Augustine, St. Thomas Aquinas, and other great thinkers developed arguments that help us to understand that it is reasonable to believe in God. There are limits, however, to what we can know about God from reason.

7 The World is a Work of Art: St. Francis of Assisi is the patron saint of ecologists.  He reminded us that the created world is God’s work of art.