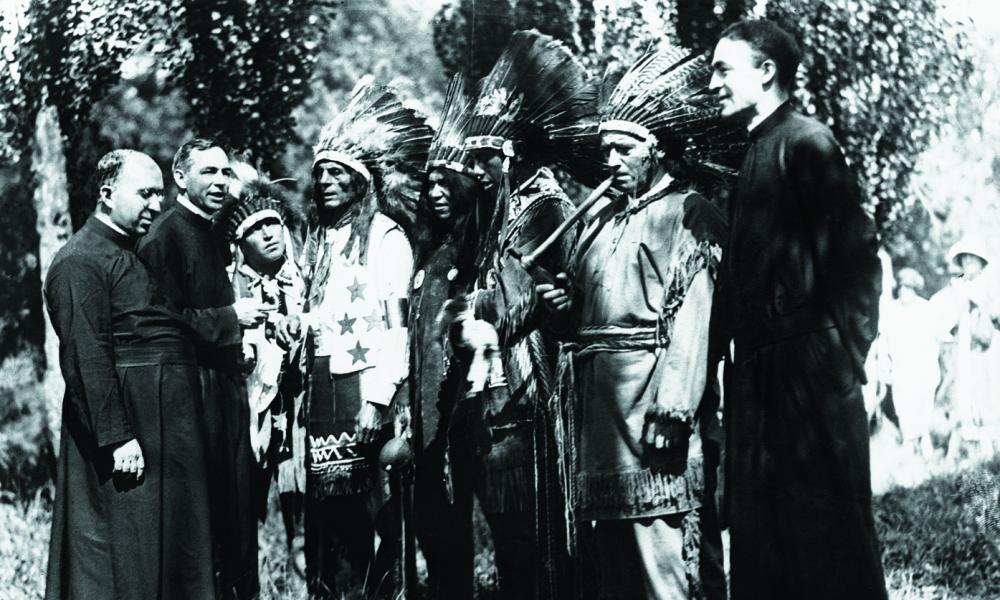 The story of St. Isaac Jogues, one of the first martyrs of America

Isaac Jogues was one of those missionaries. He was born in 1607 in Orleans, France, already famed for its martyred daughter, Joan of Arc, the “Maid of Orleans.” After his ordination to the priesthood in 1636, Isaac Jogues went to Quebec, Canada, as a missionary to the Huron Indians, who called them “Blackrobes.”

While the Hurons were welcoming to the Jesuits, who in time slowly made converts to Christianity among the tribe, the Blackrobes faced constant danger from the Iroquois, the long-standing enemies of the Hurons. In 1642, Isaac Jogues and some fellow missionaries were captured by the Iroquois as they traveled to get medicine and supplies for their village. They were imprisoned and tortured and taken to the Iroquois village in what is now Auriesville, N.Y., not far from Albany. René Goupil, a layman who worked with the Jesuits, was tomahawked by the Iroquois for tracing the Sign of the Cross on the foreheads of some children. He was the first North American martyr.

Isaac Jogues was beaten and had his thumb cut off before being rescued by some Dutch settlers. These Dutch Protestants put him on a ship and returned him to France. He was greeted as a hero by the French people, who had followed the tales of his “adventures” among the Native Americans through reports sent back by French and Dutch traders. But he could not stay in France. God was calling him to return to the Hurons, so he came back in 1644.

Second trip – not so lucky

After two more years working among the Indians, Isaac Jogues and his lay companion, Jean de Lalande, went on a peace mission to the Iroquois. They were captured by a war party of Mohawks (members of the Iroquois nation), tortured, and beheaded. The date of their martyrdom was Oct. 19, 1646.

More martyrdoms followed. Fr. Anthony Daniel, Fr. Charles Garnier, and Fr. Noel Chabanel were all murdered in separate incidents.  Fr. Jean de Brébeuf, who had been in Canada the longest, teaching the Huron language to the other missionaries, writing catechisms, and baptizing more than 7,000 Hurons, was tortured and killed by the Iroquois in 1649, along with Fr. Gabriel Lallemant.

Together, these men are called the North American martyrs, and their feast day is celebrated Oct. 19.

A connection to Blessed Kateri Tekakwitha?

Well, the first Native American headed for sainthood was born 10 years after St. Isaac Jogues’ death in the very village where he had been martyred. Her father was a Mohawk warrior – one of those who tortured and killed the missionaries. And her mother was an Algonquin, a member of a Huron tribe, who had converted to Christianity because of the witness of the Blackrobes.