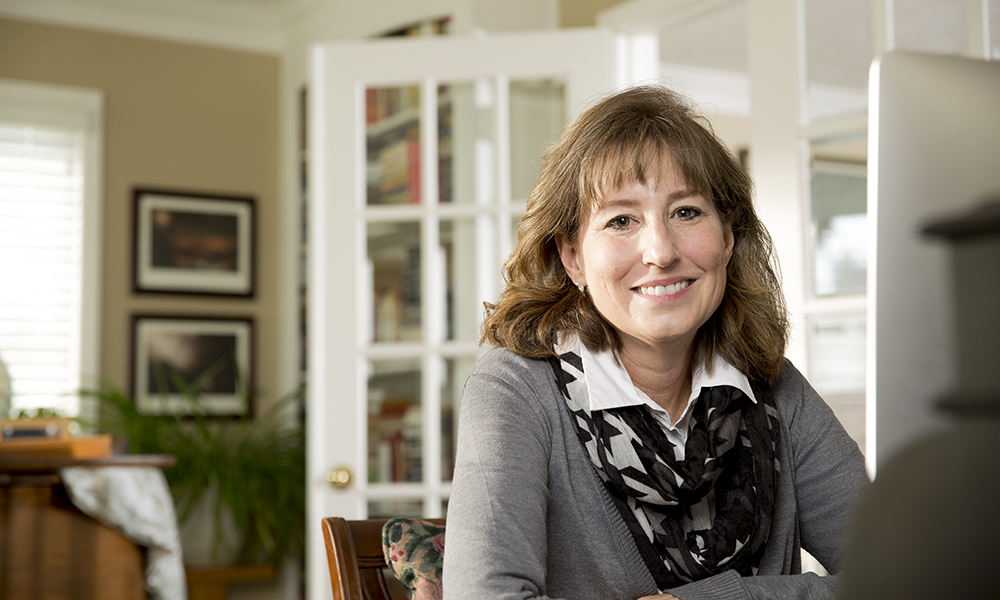 A bond with Catholicism for Stephanie Van Koevering of DeWitt happened in a series of chapters, like a terrific book. At the start of the book, Stephanie had no idea she would end up in love with the Catholic faith.

“We all have journeys in all of our stories,” Stephanie says. “My kids have been taught from a young age that you look for those stories in people.”

As a child growing up in Bangor, Mich., every week Stephanie attended the First Congregational Church where she had been baptized.

“I grew up with the idea that church was a place where you were loved and cared for as an individual and spiritual growth was a big part of that,” says Stephanie. “It was very “Little House on the Prairie.” A very almost traditional service, very formal service. We didn’t talk about a lot of things I do as a Catholic, but my first church prepared me well for my life in Christ. It kind of had an old-fashioned, simple feel to it – there was a liturgy there, but it was very linear.”

Her introduction to Catholicism happened while she was attending Hope College. Although the history of the college was based on a similar Protestant religion, Stephanie made friends with Polly and Jen, who were both Catholic.

“Jen converted to Catholicism during our time together, and so I was there to witness her journey,” Stephanie says. “And to me, looking at their rosaries, and the holy water font in our room, and all that stuff it seemed – crazy. It seemed like veils and Bollywood compared to my rather plain upbringing, and I could not reconcile the two. But at the same time, it was very intriguing to me, and I took steps when I was in college to explore conversion to Catholicism. My parents thought I was out of my mind. I heard about RCIA [Rite of Christian Initiation of Adults], and the barriers to entering were too steep for me at that point in my life. But I did like the liturgy. I was very intrigued by that piece of Catholicism.”

Her next chapter started after marriage when Stephanie was pregnant. She craved a religious base, and found it in downtown Lansing at St. Paul’s Episcopal Church. She says: “It’s beautiful in there, the stained glass is gorgeous, and the music – you feel like you’ve just gone to heaven. I fell in love with that church immediately.” They attended St. Paul’s for several years, and then eventually, Stephanie felt pulled in a different direction.

Stephanie continues: “I decided that I needed to take a step back from St. Paul’s and from my beliefs as a whole. So then I actually went on a big spiritual voyage. I decided that rather than walking into a church and allowing myself to be swept away by beauty or welcoming faces that I needed to find the church that agreed with me theologically, and then pursue that faith wholeheartedly and bring my children up in that faith. So I started reading. And I read all kinds of comparative literature books – I read about Buddhism and Islam. I read about Judaism, everything – Christian or no. Just because I wanted to have that sure and certain grounding that I was doing the right thing. And so I kept reading, and I kept reading. And I kept coming back to the principles of Catholicism.

“I was also encouraged by my husband, who felt that Catholicism had a lot to offer. In praying about it, I thought, this is a Church that isn’t moving. Their principles and the things they hold sacred aren’t shifting with the times. I wanted to stick my tent pole in the ground and pour concrete in and around it and have it stay there for all eternity. I felt the Church was going to be that way for me. And it has remained so.”

At St. Gerard parish in Lansing, Stephanie found an environment where she felt a traditional connection between her childhood and adulthood. “It is what I need to be nourished on,” Stephanie says. “No matter what community I’m in, or where I am, I know I have a home. I have a sanctuary I can go to. It is a safe place.”

The next chapter for Stephanie was a heart-breaking diagnosis of Stage 4 Non-Hodgkin’s lymphoma in 2009. Faith steadied Stephanie. “One morning I was making the bed, and there was all this uncertainty, and the whole world felt like it was falling apart around me, and I just remember making the bed and thinking ‘this is God’s plan for me,’” says Stephanie. “And whatever comes out of this, it’s going to be okay. Even if the worst thing happens, it’s going to be okay. I needed a rock, one that would never move and that itself was capable of holding me and my family steady. The Catholic faith is timeless, built on the rock of Peter, and it felt right then. And it still feels right today, When I’m feeling lost or tired or uncertain, that rock is there, immovable. I love it.”

Another chapter in Catholic faith began when she and her husband, Dyck, moved their sons, Alex and Don, to school at St. Gerard. The decision led to a joyous learning environment. “The world is getting harder and harder and harder each and every day, and the best gift we can give our kids is a grounding, a solid foundation that they can build on. In this day and age, there are few immovable social norms. It’s up to us as parents to decide what our kids are going to discern as right and wrong. The difference in sending our kids to a Catholic school is that we know we have adults that are on the same team we are. Our kids get a feeling of home and stability and love.”

Stephanie maintains a very close relationship with her parents, and that too has been a blessing. She says, “You know, I think my parents have come to understand the beauty of the Mass, and as they’ve talked to me about my faith – because I talk a lot about it – they understand it, and they have a strong feeling their upbringing prepared me well for my life. They came to a Grandparents Mass at Lansing Catholic last year, and they were so thrilled to be included in it. They enjoy that the Church is reaching out to them and that their grandson wants them to be part of his experience, as do I.” Whatever happens next in the book of Stephanie’s life, she knows her Catholic faith is in every chapter.