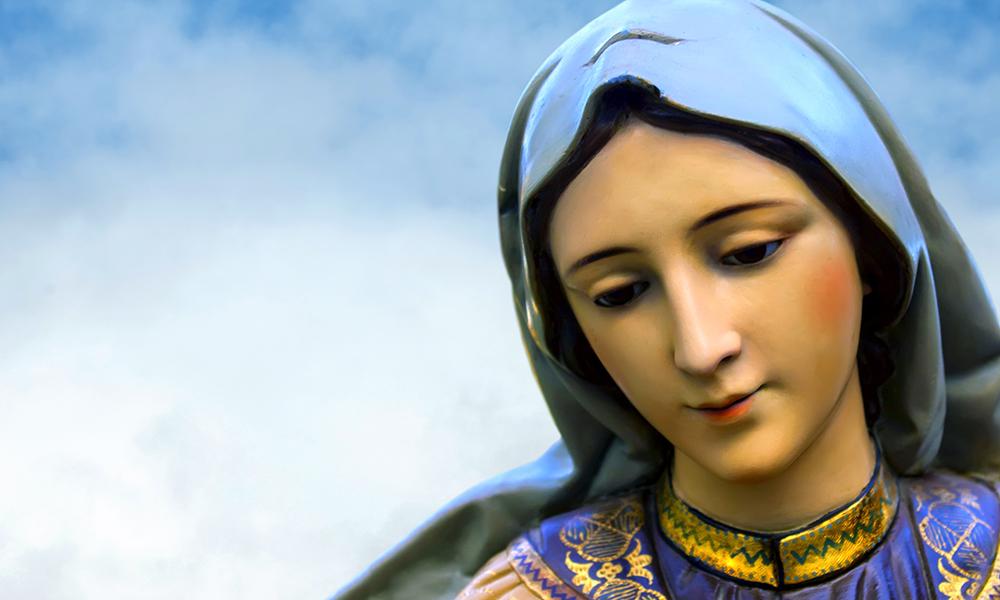 Consecrate Yourself to Jesus Through Mary

DURING BISHOP’S YEAR OF THE BIBLE, we’re exploring various ways of praying with Scripture. In May, which is typically the month dedicated to Our Lady, we are going to take a deeper look at Marian Consecration.

What is Marian Consecration?

The Catechism of the Catholic Church defines a consecration as “The dedication of a thing or person to divine service by a prayer or blessing.” We entrust ourselves, all that we have and all that we do, to the protection, love and intercession of Mary.

This idea is deeply rooted in Scripture. In fact, the first persons to entrust themselves to Mary were the three persons of the Blessed Trinity. In Luke 1:34 we have the words of the Archangel Gabriel to Mary, “The Holy Spirit will come upon you, and the power of the Most High will overshadow you; therefore the child to be born will be called holy, the Son of God”; each person, Father, Son and Holy Spirit, entrusts themselves to her. Later on, in the Gospel of John, our Lord, from his cross, entrusts his Beloved Disciple to his mother Mary to be his own mother. From that hour, “the disciple took her to his own home.” (Jn 19:27)

Why should I consecrate myself to Mary?

So, one may ask, “Shouldn’t we instead consecrate ourselves to Jesus, if this, as the catechism says, is about dedication to divine service? Mary isn’t divine.” This is a very good question and deserves a good answer. Marian consecration is a consecration to Jesus; however, it is a consecration that is done through Mary.

If you think about it, this is an entirely appropriate way to encounter our Lord. In fact, it is the way he established from the beginning. It is through Mary that he came into the world in the first place. In addition, our Lord did not discard Mary after she gave birth; she was an intimate member of his disciples; one of the few at the foot of the cross, she received the Beloved Disciple as her own son and was present on Pentecost morning when the Holy Spirit descended upon the Apostles, activating them to bring Christ to the world. As her words to the workers at the Wedding Feast of Cana reveal, Mary is always directing us toward her son and instructing us to “do whatever he tells you.” (Jn 2:5)

So why consecrate yourself to Jesus through Mary? Because she’s a good mother who wants you to love our Lord. She wants us to be in heaven for all eternity, and so she stands as a gracious intercessor on our behalf. She takes all of our feeble efforts at a good life, adds her motherly care and attention and then presents us to her son. She helps us grow into better disciples of Jesus. Many saints have found Marian consecration to be a key to their personal holiness, especially saints such as Maximillian Kolbe, who was martyred by Nazis, and St. John Paul II, who chose his papal motto from his consecration.

OK, you’ve convinced me. How do I consecrate myself to Jesus through Mary?

First, it is customary to make this consecration on a Marian feast day. There are many all throughout the year, so choose one to be your day of consecration. Next, it is typical to do a time of preparation beforehand. The preparation usually lasts 33 days and ends the day before the feast. For that time of preparation, it is helpful to have a guide along the way. You could go old-school and get the method called Preparation for Total Consecration, by St. Louis de Montfort, or use a recent version, 33 Days to Morning Glory, by Fr. Michael Gaitley. There is no wrong or right here – find a method of consecration that suits you.

In the end, we’re all trying to know, love and serve Jesus as best we can. Mary can certainly help us because she was his mom, and, other than God the Father and the Holy Spirit, she knows Jesus better than anyone. Who better than her to help us along the way?