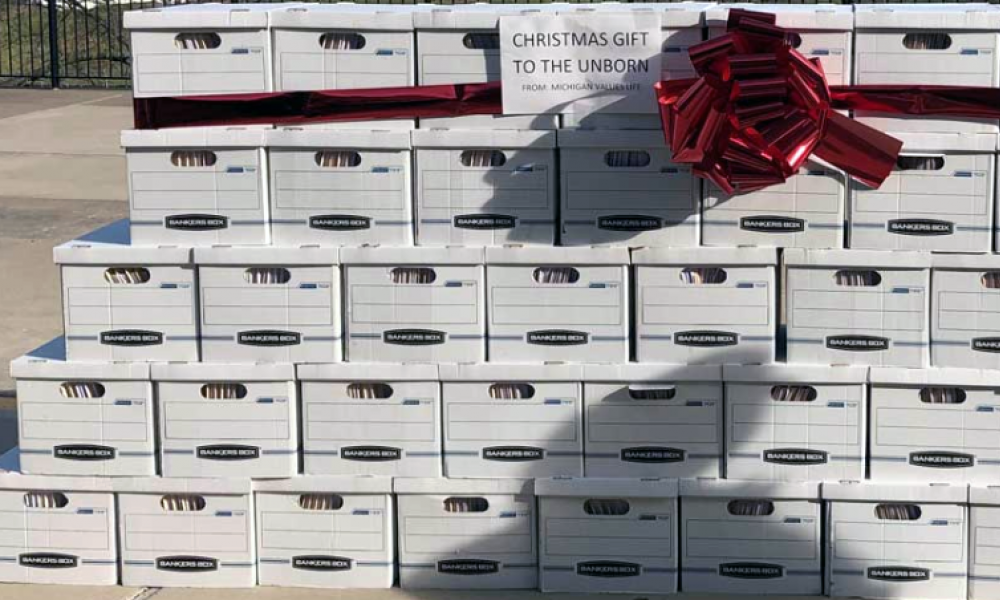 Michigan Catholic Conference is applauding the Catholic community in this state for gathering tens of thousands of signatures that are among 379,418 total signatures submitted today to the Board of State Canvassers to end the second-trimester dismemberment abortion procedure.

Beginning this summer, some 800 Catholic parishes, schools and entities across the State of Michigan worked within their religious communities, at community-based events, holiday fairs and other public gatherings as part of the Michigan Values Life effort to promote legislation to ban the dismemberment of unborn children. This “Citizen’s Initiative” process is a mechanism within the Michigan Constitution that allows citizens to petition the Michigan House of Representatives and Senate to pass legislation. The provision does not require the governor’s signature to become law, an advantage for this effort as Governor Gretchen Whitmer – a fervent supporter of abortion – has publicly stated she will veto any pro-life legislation.

“It cannot be overstated how grateful Michigan Catholic Conference is for the participation of the seven dioceses in the state and the hundreds of Catholic entities that worked to support this initiative,” said Rebecca Mastee, J.D., Michigan Catholic Conference Policy Advocate. “The Catholic community has been engaged since day one, and the level of participation only escalated the more informed citizens became of the barbaric nature of this particular abortion procedure.”

According to the American College of Obstetricians and Gynecologists: “Usually disarticulation (or dismemberment) occurs as the physician delivers the fetal part grasped in the instrument and pulls it through the cervix.” In unpleasant layman’s terms, the abortionists will have effectively torn the child limb by limb before pulling its dismembered body from his or her mother’s womb. Unborn children feel pain as early as eight weeks in the pregnancy, according to testimony from medical practitioners when the United States Congress banned third-trimester abortions in 2004.

The Michigan Constitution requires valid signatures of registered voters that total at least eight percent of the total number of votes cast in the previous gubernatorial election.  That means some 340,000 valid signatures are necessary this year to place an initiative before the legislature. The signatures must be gathered within 180 days from the point when the signature-gathering process began. Once the necessary number of signatures are validated by the Board of State Canvassers, the Legislature has 40 days either to approve, reject, or not vote on the petitions.  Based on supporting comments from both the Senate Majority Leader and Speaker of the House, the Legislature is fully expected to vote on and approve the initiative within that 40-day period.

“We’re now urging both the House and Senate to vote on the petition once the signatures are verified in order to ban this heinous and barbaric affront to the dignity of human life,” said Mastee.  “We encourage elected officials on both sides of the aisle to vote with their conscience and protect unborn human life from this gruesome procedure.”