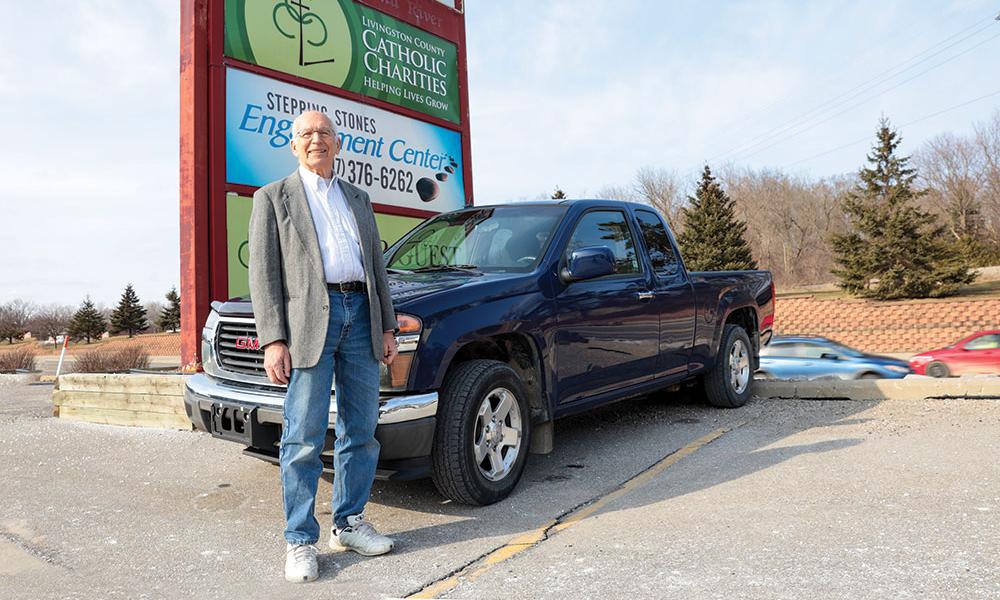 When Gerry Munsell retired in 2015, the soft-spoken Fowlerville native could have spent a quiet retirement at home on the farmland his family has owned since 1837. Gerry and his wife, Beth, hadn’t chosen “quiet” previously, however, having opened their home numerous times to foster children and built a life centered around their faith and the works of mercy that accompany it.

So, for the past seven years, Gerry has served as a volunteer driver for Livingston County Catholic Charities (LCCC), logging about 100 drives a year, mainly for senior citizens unable to drive themselves to appointments or to the grocery store. At the beginning of the pandemic, when many drivers opted to stay home, Gerry kept going.

“I was quite healthy; I thought I’d be able to do that without exposing myself to COVID,” Gerry says, adding that he and Beth talked often about measures they could take to protect themselves.

Early on, he says, “We were really quite cautious about what we could do,” and Gerry was conscientious about sanitizing his car, washing his hands, wearing a mask and sometimes changing clothes when he returned from a drive.

“The agency was quite good about providing the PPE [personal protective equipment] we needed,” he says. “And, as the pandemic stretched on, we had to have our shots, and had to wear masks continuously while we were driving.”

That perspective of seeing a simple need and getting it done is emblematic of Gerry’s humble service to his elderly neighbors: “It’s who he is,” his wife Beth chimes in. Having served on the LCCC Board of Directors for nine years, when it was time to step down and evaluate how he could spend his time in retirement, Gerry asked Director Mark Robinson how else he could help.

“Well, you could be a driver,” Gerry remembers him saying, and that was that. Since then, he’s averaged between two and three drives a week, some taking place within a few miles’ radius, while others take clients from their homes in Livingston County to specialists’ offices in Detroit, Ann Arbor or Lansing. Gerry estimates that his average trip – from the client’s house to their destination, not including his personal mileage to pick them up – is about 30 miles. He chooses to decline the agency’s reimbursement for gas since, “I figured that was only taking money right out of the program.”

More than a volunteer Uber stand-in, though, Gerry has become a beloved and often-requested companion for many of the agency’s clients. Through his gift of time, the hodgepodge of mundane errands he runs with them turns into a cherished routine.

“I have one lady who requests me all the time,” he says. “She goes every Monday, and we end up going to the grocery store, and then we go to get her lottery tickets, and when she has cats, we go to the pet store to buy food for them. This winter, we were stopping to get corn for the deer, and then the last thing we would do is stop to get her lunch at one of the fast food places, and then I’d take her home. So that would entail about three to four hours of my time driving her, and about 30 miles.”

Another client moved into an assisted living facility after Gerry had been driving her for two years on similar errands. She no longer needs rides, but their relationship has continued, with Gerry recently stopping by to drop off her favorite cookies – which he knew, of course, from all the times she’d handed him her grocery list.

Those small acts of service – getting cookies off the higher grocery shelf or, as he remembered from one drive, finding her the root beer float she mentioned craving – are what turned a volunteer-client relationship into a deeper friendship. When her adult son died this year, Gerry took her to the memorial service – not as an official driver this time, but “because of the relationship.”

He’s modest about his service, but his wife Beth sees its irreplaceable impact: “[That woman] needed a support, and that’s Gerry to her.”

The relationships he’s formed through driving, Gerry says, have “made me appreciate the people around me, and the effort they make to continue their lives, stay in their homes and still be independent.”

He might be demure in gatherings with large groups, he says, but “one-on-one is easy,” and Gerry values the conversations he shares in his pickup cab.

“Each person has a story,” he says. Loving his neighbors means learning their stories, one drive at a time.

The mission of Catholic Charities in the Diocese of Lansing is the work of the Catholic Church: to share the love of Christ by performing the corporal and spiritual works of mercy.