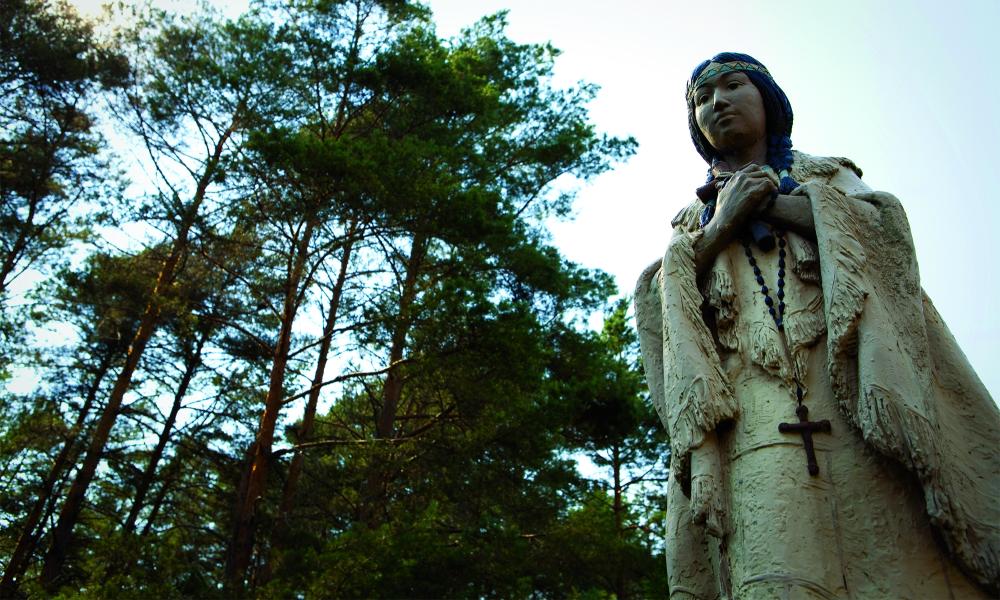 The canonization of Kateri Tekakwitha Lily of the Mohawks

Kateri Tekakwitha (1656 – 1680), also known as Lily of the Mohawks, was a Native American convert to Roman Catholicism. As a religious lay woman, she was shunned and basically exiled by her tribe, dying at the age of 24. Known for her chastity, she became the first Native American woman to be venerated in the Church. Kateri was beatified by Blessed John Paul II in 1980 and Pope Benedict XVI officially announced on February 18, 2012 that she will be canonized on October 21, 2012. Her feast day is July 14.

Jesuit missionaries set up missions near Montreal in 1666 as one of the conditions of a peace treaty between the French and Mohawk people. Kateri first encountered these missionaries in 1667 at age eleven. Though her uncle discouraged any contact with Christianity, she was drawn to the teachings of the Church and began attending catechism.

In 1676, she was judged ready for baptism in a departure from Jesuit policy, which typically withheld baptism for new converts until they were on their deathbed or until the missionaries could be certain that they would not backslide. She was baptized on Easter Day in 1676. She took the name Catherine, in honor of Catherine of Siena, the 14th-century saint. The word Kateri is actually an Iroquois pronunciation of the name.

After Catherine was baptized, she only remained in the village for another six months because she was continually harassed and accused of sorcery and promiscuity.  She eventually went to the Jesuit mission where she lived for the last two years of her life.

Before someone can be beatified, it must be proven that a miracle has taken place through his or her intercession. The belief is that such a miracle is evidence that the person is enjoying the Beatific Vision because God has performed the miracle in response to his or her prayers.

However, in order for the Blessed to be canonized and acquire the title of Saint, another miracle is required. This miracle must be attributable to the intercession of the Blessed and must have occurred after his or her beatification.

For Kateri, this second miracle involved a 5-year-old boy from the state of Washington who, in 2006, was suffering from a flesh-eating bacterial infection that had already caused the disfigurement of his face and was threatening his life. Kateri herself had been badly scarred on the face and left with damaged eyesight during a smallpox epidemic when she was only four or five years old – an epidemic that had claimed the lives of her father, mother, and younger brother.

After it was determined that the boy would not survive surgery, the parents prayed for his healing to Jesus Christ through the intercession of Kateri, whose own scars vanished at her death leading Pope Pius XII to declare it a miracle in 1943. The boy was miraculously healed and on December 19, 2011, Pope Benedict XVI approved the miracle clearing the way for her canonization in October 2012.

The path to sainthood at a glance

The current procedure for causes of beatification and canonization can be found in the Apostolic Constitution Divinus Perfectionis Magister promulgated by Pope John Paul II in 1983. The various stages leading to canonization are as follows:

The process begins at the diocesan level after at least five years have passed since the death of the candidate. Usually, the bishop of the diocese in which the candidate died is responsible for beginning the investigation after he receives a request from the faithful through the postulator, generally a priest who presents a plea for a beatification or canonization. In response, the bishop forms a diocesan tribunal for this purpose once the nihil obstat (a decree that no impediment exists that would prevent the investigation) of the Holy See is obtained.

The tribunal calls witnesses to recount concrete facts concerning the candidate’s exercise of Christian virtues considered heroic. Additionally, all documents regarding the candidate must be gathered for review. At this point the candidate is entitled to the title of Servant of God.

When enough information has been gathered, the congregation will recommend to the pope that he make a proclamation of the Servant of God's heroic virtue. From this point the one is referred to by the title of Venerable. A Venerable is not given a feast day, no churches may be built in his or her honor, and the church has made no statement on the person's probable or certain presence in heaven. However, prayer cards and other materials may be printed to encourage the faithful to pray for a miracle wrought by his or her intercession as a sign of God's will that the person be canonized.

The investigation is then passed on to the Congregation for the Causes of Saints in Rome. A summary report, or the Positio, is prepared that proves the heroic exercise of virtue. The report undergoes an examination by nine theologians who give their vote. If the majority of the theologians are in favor, the cause is passed on for examination by cardinals and bishops who are members of the Congregation. If their judgment is favorable, the Prefect of the Congregation presents the results of the entire investigation to the Holy Father, who gives his approval and authorizes the Congregation to draft the relative decree of beatification. The public reading and promulgation of the decree of beatification grants the candidate the title of Blessed.

Beatification is the permission to venerate the candidate within a limited sphere. Typically, it means that the person can be venerated by a particular region or group of people for whom the person holds special importance. In other words, it is not universally binding to the entire Church.

If the candidate was not a martyr but rather a confessor who died peacefully after a life of heroic virtue, a miracle attributed to the Servant of God verified after his or her death is necessary. The miracle must be proven through another canonical investigation in a procedure that is comparable with that required for heroic virtues. If the investigation comes to a satisfactory conclusion, a second decree is promulgated that with the decree on heroic virtue grants the candidate the title of Blessed.

In order for the Blessed to be canonized and acquire the title of Saint, another miracle is required. This miracle must be attributable to the intercession of the Blessed and must have occurred after his or her beatification. The miracle is verified according to the same methods used during the beatification stage.

Once conferred, the title of Saint indicates that the person lived a holy life, is in heaven enjoying the Beatific Vision, and is to be honored by the universal Church. Saints may be publicly invoked and mentioned officially in the liturgy of the Church, especially in the Litany of the Saints. The Saint is assigned a feast day which may be celebrated anywhere within the Catholic Church, although it may or may not appear on the general calendar or local calendars as an obligatory feast. Churches may also be built in his or her honor.

By the Numbers: Native American Catholics

2,475,965: Americans self-identifying as Native American or Alaska Native in 2000 Census

17: Percent of total Native American population estimated to be Catholic