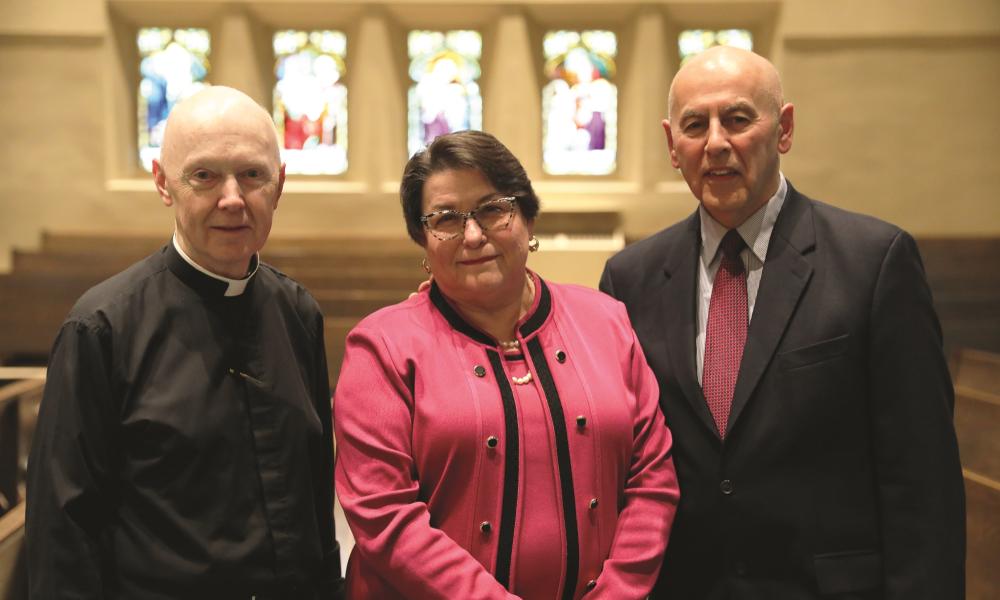 And, his love for the parish is why he and his wife, Judith, agreed to assist with the diocesan-wide Witness to Hope campaign within the parish.

The couple, along with Karol and Lance Lynch, were co-chairs of the campaign at the cathedral, and their role was to educate and engage parishioners through hosting question-and-answer receptions. The co-chairs also spoke to the congregation during the campaign’s kickoff.

During the receptions, parishioners had their questions and concerns answered. They learned that the campaign is a shared responsibility as it “gives parishioners the opportunity to not only help their individual parish, but to partner with all the other parishes in the diocese to help foster a strong and faith-filled future for the Diocese of Lansing,” Charles says.

The Filices were given a general outline about the campaign, which appealed to Charles because it was not a “high-pressure sell.”

“It wasn’t a guilt-inflicting approach. It was kind of a soft sell through explanation of what the purpose of the campaign was and how the funds will be used,” he says.

In addition to campaign funds being allocated throughout the diocese for faith programs, what intrigued Judith was that the campaign also supports the diocesan priests’ well-being and “our brothers and sisters in Flint.” She also highlighted that the parish at St. Mary Cathedral will finally be able to address building maintenance issues.

“While (the maintenance issues) may not be very dramatic or colorful, they need to be taken care of,” she says, adding that the physical structure of the diocesan churches, especially the cathedral, need to be cared for, and the campaign assists with that.

One of Judith’s favorite features of the cathedral are the stained glass windows, and she said she finds them to be helpful in her spiritual reflections. The outer frames of the windows are slated to be preserved with the campaign funds.

“When I first heard the requirements and the needs of the physical structure of the cathedral, it was clear to me that was something we had to address,” she says.

The Filices and the Lynches approached the campaign as directed – with a soft touch.

“The idea was to have people give from generosity as opposed to some sense of obligation. I think we achieved that, and it united people for a common goal,” Charles says.

Prior to the receptions, Charles says he would see other parishioners at Mass or events; however, he did not necessarily know everyone’s name. The campaign gave people the chance to not only fund the mission, but to engage with one another.

The capital campaign is a common goal, a common goal that unites the people. Aside from how the funds will assist the parish and the diocese, Judith added that she appreciated that the campaign period was short. “You have this initial drive … to gather people together in community, but it doesn’t stretch out for an exceptionally long period of time, and I think that can be an advantage to something like this,” she says.

“Money was involved, but it was something that was solicited in a benign way, and also people saw the purpose for it. I think that’s very important that people actually respond to the need and did very generously in our experience,” she says.

“Witness to Hope involved a lot of soul searching and a lot of consideration,” Charles adds. Because the campaign “was not guilt ridden,” Charles says people could contribute through prayer or volunteering. Without the pressure, it gave people the opportunity to learn the purpose of the campaign – to get everyone involved.