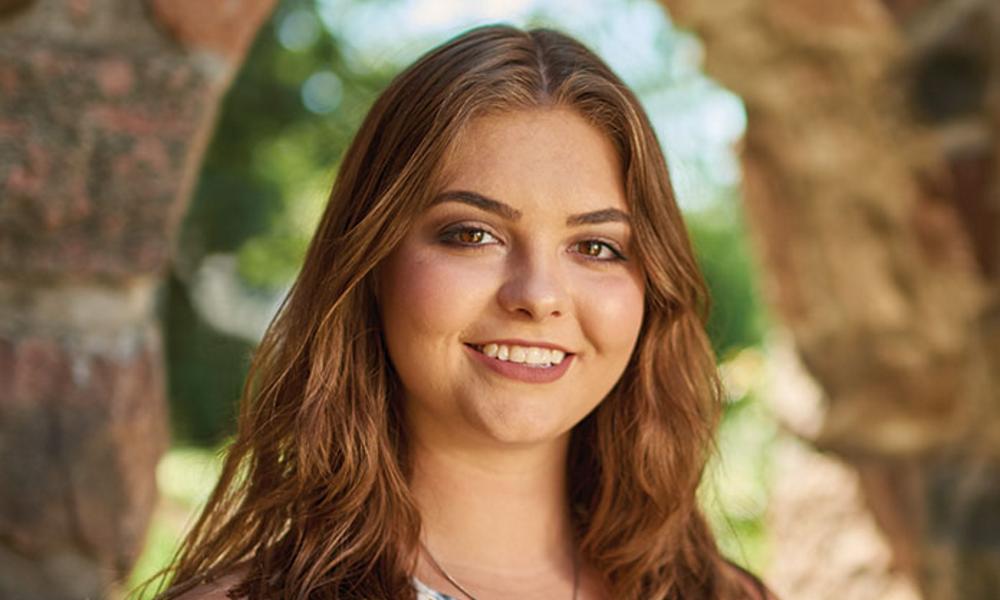 Brianna Goff marvels at the gentle way the Lord led her one step at a time to bring about her conversion. “As a freshman [at Dexter High School], even though my parents raised us Catholic and made us go to Mass on Sundays, I didn’t want anything to do with the faith.

“It was my sophomore year that my dad made me go to youth group and, to my surprise, I liked it. After a year of attending and participating in the group, Don Dalgleish, my youth minister, asked me if I wanted to be on the leadership team. Saying ‘yes’ to that further opened the door. Don sent me to DYLC (Diocesan Youth Leadership Camp), which is where my personal faith conversion really happened. I had no idea what to expect, but I met other young people who shared my faith, and I started to grow and accept God’s role in my life. One key moment there was the sacrament of reconciliation, where, maybe for the first time, I poured out my guts. After this experience, another camper approached me to say that God told him to pray for me. I was overcome with tears from really knowing that God is real and present. I started to trust him, which helped me understand who I was. After DYLC, I wanted to be more involved, and that’s when I was all in leading retreats and youth group events.

“I left DYLC confident in the faith. I started sharing my own faith journey with others and telling my story. I applied and was accepted to be a DYLC leader, which I got to do this summer. Part of that experience was me giving a witness talk. Now I think my role as a disciple is to let others know that it’s OK to ask people questions about God and it’s OK to be a young person who loves him. But being a young disciple definitely has its challenges – you might want to sleep in on Sunday, but you know you need to go to church. Or friends ask you to go to a party and you have to decide if it’s where you should be. I’m working on listening to what God wants me to do. For a long time, prayer meant me telling God what I wanted him to do or asking him for things.

“In February, I went to the mission retreat at St. Catherine Academy in Wixom, which really taught me how to listen. I learned to clear my mind and invite the Lord in. Now, in prayer, I want God to show up and I’m ready to hear what he wants to tell me. At the mission, I was also able to experience for myself and to witness true healing. I know that God is at work,” she says. Brianna attributes her father’s apparent healing from cancer to an experience he had while chaperoning that mission trip. Brianna continues: “He had been in treatment for cancer with horrible side effects for 13 months straight. The experience of inviting the Lord in that night and being prayed over was a turning point for him, and a month later at his checkup, all of his blood work was completely normal and has remained that way since.

“All of these experiences have led me to seek out a Catholic environment. I am going to Franciscan University in Steubenville in the fall. I hope to continue to learn to listen to the Lord and become more dedicated to my faith. I want to pray, to go to weekly adoration and to attend daily Mass. I also want to become friends with people who will help strengthen me in my relationship with God. As I look to the future, mostly I look forward to continuing to getting to know who God is, and who I am because of him.