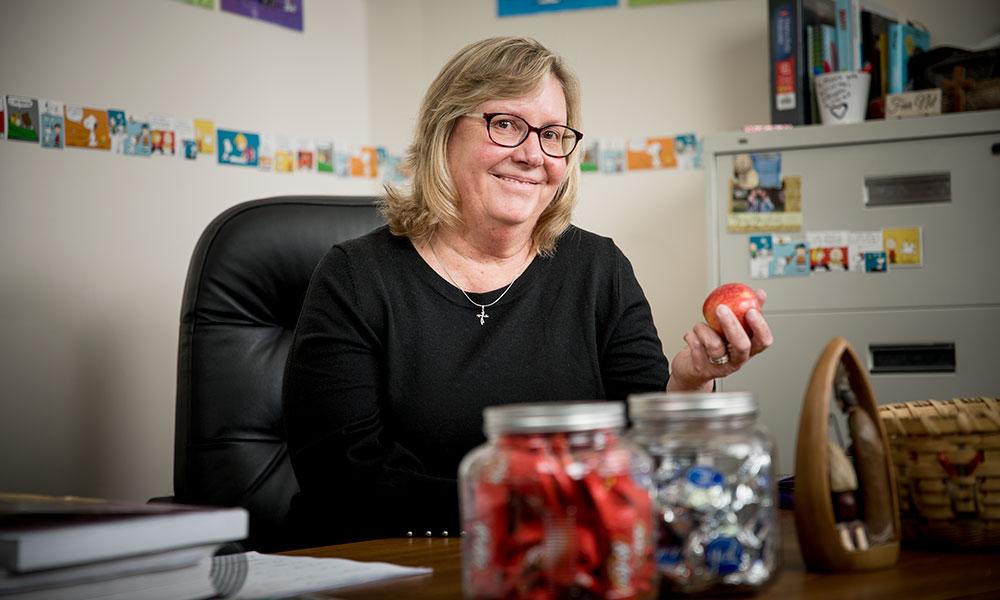 Beth's job at a Catholic school led to her conversion

Beth’s "retirement job" brought her first experience teaching in a Catholic school, and also her first immersion in Catholicism in general.

And it was immersion: Beth Wildern recalls that the majority of her students that year came from practicing Catholic families; between their exuberant faith and the rhythm of regular morning prayer and school Masses, her curiosity was piqued, and the teacher found herself a student. By her third fall at St. Mary, Beth entered the Catholic Church, embracing the faith that won her over through the simple witness of children.

Her sixth-grade classroom at St. Mary School in Charlotte is decorated with math posters, signs announcing the virtue and saint of the month, and, above her desk, a reminder that “Happiness Is a Personal Relationship with God!”

“I do love teaching math,” Beth says, adding that she struggled with it as a child and especially feels for students who balk at the subject. Beth came to St. Mary’s four years ago after 25 years in the Charlotte Public Schools system. The daughter of an educator, Beth loved teaching in her hometown, but felt her time in public schools was at its end.

Beth was unsure of her next step, and then a position opened when St. Mary expanded from K-5 to K-8, and the principal found herself in need of a sixth-grade teacher. Beth happily took it. But there was a catch: she wasn’t Catholic. What followed was not only Beth’s first experience teaching in a Catholic school, but her first immersion in Catholicism in general. And it was immersion: Beth recalls that the majority of her students that year came from practicing Catholic families; between their exuberant faith and the rhythm of regular morning prayer and school Masses, her curiosity was piqued, and the teacher found herself a student. By her third fall at St. Mary, Beth entered the Catholic Church, embracing the faith that won her over through the simple witness of children.

“That first year was so special,” she says. “It was like they just took my hand, and someone was always volunteering to be a buddy and sit next to me at Mass, show me how to do things.”

Beth was struck by how easily her students spoke about and lived their faith, whether through classroom discussions or their quick impulse to show kindness to each other. They were unabashed in explaining Catholic traditions, such as Beth’s first Lent, and she was moved to see how tangibly the school’s focus on virtues took root among her students.  “As their teacher, it just amazes me what having that love does to a person,” she says.

Beth’s faith background was known from the beginning of her interview process (an interesting experience in itself, as Beth’s daughter-in-law, Mandy Wildern, is the St. Mary School principal, and could not be involved in the formal interview process). Despite not being Catholic, however, Beth’s teaching experience and long-standing presence in the Charlotte community, where she and her husband raised their four sons, spoke for themselves, and she felt welcomed.

Beth remembers Father David Rosenberg, then-pastor at St. Mary, giving her some early advice: “Don’t let the fact that you’re teaching at a Catholic school be the reason you become Catholic.”“He didn’t say that to put anything in my head,” Beth says, but his words were “so powerful to me,” and put her at ease.

As a child growing up in Charlotte, Beth had attended what she describes as “a little country Bible church.” She and her five siblings would come for Sunday morning and evening services, Wednesday night prayer meetings and youth group – at the least. But by the time she started at St. Mary, Beth was no longer attending church regularly, though she still held on to the Christian values of her youth.  “I always believed in God,” Beth says, “I could say I accepted Jesus as my Savior, and that was my saving grace.” But she was keenly aware of “something missing.”  “I needed something,” Beth says, “I needed God, I needed church.”

Beth taught every sixth-grade subject except religion. For that, Brian Epkey, the parish’s director of faith formation, stepped in. At first, Beth thought she’d use the break to catch up on work, but she soon found herself listening in and participating – “a student with the other sixth graders,” she jokes. She also started attending weekly RCIA meetings, not with the intention of converting, but in order to better understand the students and families she was serving.

“I knew right away I needed to learn about Catholicism,” Beth says. Looking back, though, she adds, “I’m not sure it was so much the RCIA classes, but the group of kids I had who just showed me [the faith] and loved me” that turned her heart toward actually joining the Church.

Her second year was joy-filled, too, and at some school Masses, Beth found herself overwhelmed with emotion, as if the prayers and homilies were speaking directly to her heart. She continued going to RCIA.  How will I know?” she remembers asking Brian – meaning, of course, when to convert.  “You will know,” was his response.

At the beginning of her third year, she got a not-so-subtle nudge: “Hey, Beth,” Brian told her – “let’s make this happen.”  On Sept. 21, 2017, Beth received the sacraments of baptism, confirmation and Eucharist at an all-school Mass. “This school is my family,” she says; it seemed so fitting to have her students there. The rest of the day was filled with more celebration and joy – some students made her a banner, and her class made cards. “I think we just had fun,” she laughs.

Beth now teaches religion – and her experience has given her a new perspective on how to approach the subject with her students. “As a teacher, I need to model, and part of modeling is sharing what I’m thinking as I read this passage, or what I heard during morning prayer,” she says. “I tend to get very personal with the kids and share my thoughts and my wonders with them … I feel like I do become part of them.”

“I’m so new, I’m at the beginning,” Beth acknowledges. But she finds that phrasing her questions in terms of wondering – “I wonder why…?” – can help draw out students unsure of sharing their own thoughts, and reminds them that even teachers continue to learn. This year, she’s seen her class grow closer through their sharing.

Beth says, in referring to her years in the public school system: “I had a great career.” But the differences she sees in a Catholic environment continue to amaze her and transform her own life as a teacher. She treasures being able to urge her students on in virtue, to be aware of Jesus’ presence among them, and to know that “Jesus is our rock, and he always loves us.”

Every morning, Beth joins the rest of the St. Mary staff in prayer, a practice that drew her in even as a non-Catholic: “Here, there is more meaning, because we start with God.” That in itself, Beth believes, is cause for wonder.